The winning entry in the March, 2013 monthly contest 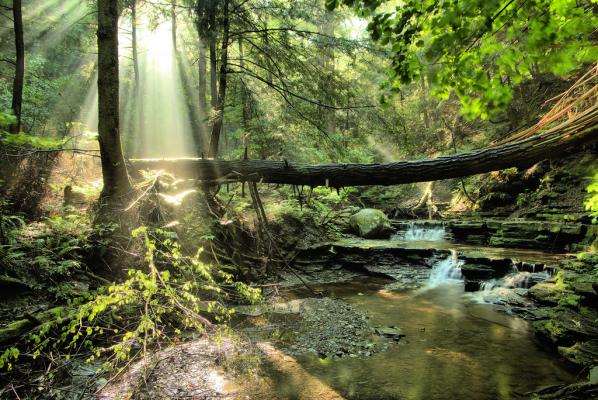 As an avid waterfall enthusiast, I am constantly hiking in the plethora of gorges left behind from when the glaciers carved the landscape and retreated north.  I am lucky to have grown up in the Finger Lakes of NY.  It's a beautiful place to visit, but better place to live.

On this particular morning in June of 2012, I hiked up into Hi-Tor which is a wildlife management area on the southern end of Canandaigua Lake.  I had already stopped and photographed seven of the waterfalls on my way upstream towards the final falls.  I don't generally take too many photos of other subjects, I am pretty stubborn in my genres are rarely step outside my comfort zone.  However, how could one not stop and admire the sunlight being cast down onto the gentle flow of the stream.  It felt like a fairy tale where one would expect to see fairies fluttering about and gnomes sitting on mushrooms.  I set up my Rocketfish CF tripod, attached the K-x with 16-45mm and began shooting away.  Changing exposure and aperture until the rays hit the sensor just the way that I envisioned.  I shot it at 16mm, f8, with a 3 second exposure.  Shot in raw, and on M.

I was quite shocked to find out I won this contest, I threw it in on a whim.  There were so many great entries and IMO lots that better captured the mood of "Dreams".  Thank you to everyone who voted for me.  I hope to be a more regular participant on this board going forward.