The winning entry in the April, 2013 monthly contest

In this post, we take a look at how the winner of our April, 2013 photo contest shot and processed his entry. The remainder of the article is by forum member Sangosto. 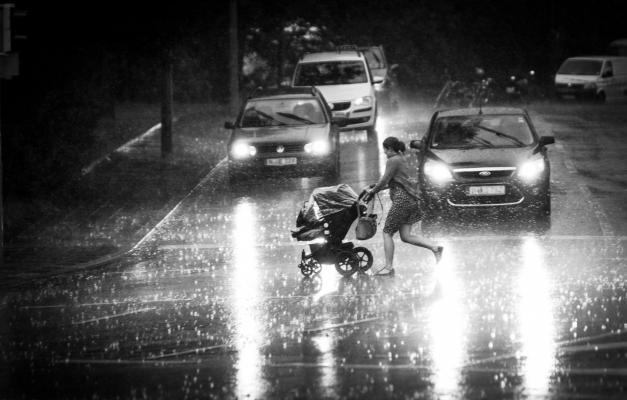 Since I had bought the water-resistant camera equipment from Pentax I dreamed of a typical scene in which people scurry through heavy rain trying not get so wet. But whenever it rained I did not have the camera with me, or the people were not spectacularly enough in a hurry through the streets. In short, it never fit.

Finally, on that day, everything seemed to fit. It began with a knight tournament, and the day was very hot and sunny. In the afternoon a short downpour came and most people spent some time in tents waiting for the rain to stop.

After the rain I saw, based on the rain radar, that a major downpour was yet to come soon. So we quickly went to the next tram stop. When we reached the tram stop, the wind began to blow and a strong downpour began. While many people ran to take cover from the rain, I stepped out of the cover. In series mode I could make several shots of the woman as she crossed the street with the stroller.

The picture was completely developed in Adobe Lightroom. After importing the photo into Lightroom, the frame was changed slightly to remove disturbing objects and the contrast and brightness were adjusted, but the picture was still missing the last kick. So I converted the photo to black and white. The effect of the photo immediately enhanced. Contrast, exposure and tonal values have been optimized. And with a slight vignetting the view is now directed on the essentials.