The Making of "Illuminated"

The winning image in our "Rule of Thirds" photo contest 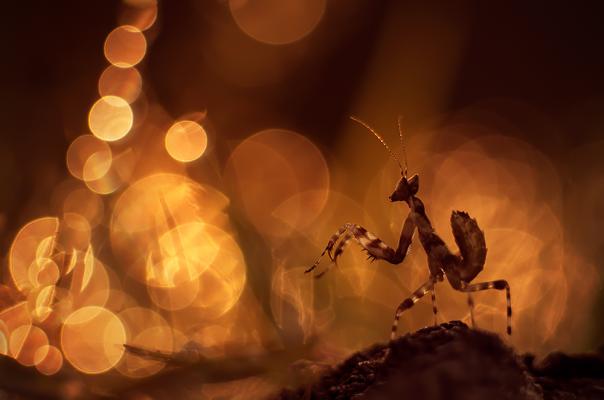 In this post we will be looking at how the photo that won last month's photo contest came to be.

For this photograph I used a Pentax K-5 camera with a Meyer-Optik Görlitz Orestor 135mm f/2.8 M42 lens which I had bought in a second-hand shop, a Pentax M42 adapter, and 31mm and 21mm extension tubes.

The camera was set to 1/400s, F4, ISO 250, no flash. I shot in the aperture priority (Av) mode. To achieve the high magnification I had to use extension tubes. After checking the histogram of a test photo on the display I compensated exposure by -0.3EV, so that the exposure got well balanced and the picture was not too bright.

Even if it appears that the Mantis is standing at one place it is just the opposite. The Mantis was walking and looking around. Therefore I chose ISO 250 allowing a shorter exposure time for my hand-held shooting thus freezing the image. 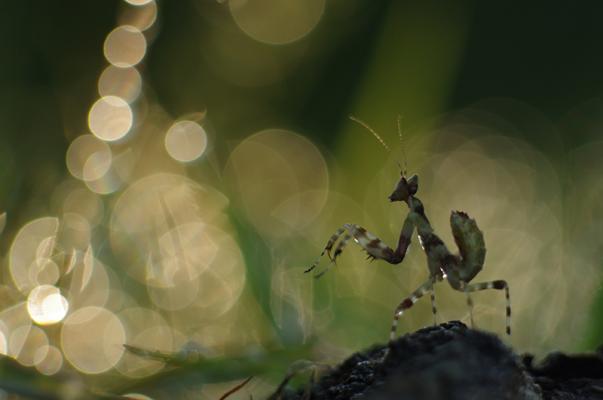 The photograph was taken in RAW format. I opened it in Adobe Camera RAW. I transformed the colours into warmer shades. I added distinctness and brightness. Then I opened the photo in Photoshop CS6. There were two disturbing light elements among the light sources, which I retouched. I removed them because being the brightest points of the photograph they would needlessly take the attention away from the mantis.

Selectively using layers I darkened the background a bit, and I drew out light sources. I adjusted the colours using layers with blending set to soft light and with lowered opacity. Then, selectively through layer masks I lightened parts of the Mantis's body. I used a high pass filter to accentuate its outlines. I set the layer to overlay and lowered opacity. I added moderate vignetting. Subsequently I used warmup filter. Finally I made the photo smaller and then I selectively sharpened the Mantis through a layer mask.