Forum member Mark Lj. was the winner of our September, 2012 "Fences" photo contest.  His photo is now being featured in our Premier Gallery, and he will soon be receiving a prize for winning the contest!  Below is some quick information about the photo from the photographer himself, as well as "before and after" shots!
"I'm extremely lucky in that I live within 5 miles of Ullswater in the English Lake District. This photograph has always been one of my favourites. I'd been taking photographs for about nine months and things were just starting to click a little. The forecast for this particular day was for a very calm day with a possibility of mist at dawn. There had been a fair bit of rain in the preceding days so I decided to head for this corner of Ullswater.

I knew the far away trees would be under water and as I approached I really liked the balance of the trees on one side and the fence on the right. I know its not a classic composition as there is nothing in the middle but I am a big fan of having plenty of space in an image. I think, rightly or wrongly, that it all adds to the peacefulness of the image and atmosphere and mood are my primary aims when I take a photograph. It was taken using the Sigma 10-20mm with a Hitech 0.6 soft filter attached. I always use a tripod and remote release and try to go for about a second or so exposure, using a 2 stop ND filter on occasion. For this photograph I walked out into the Lake a little way to get this view. This was the first image of a series. On checking the histogram it was slightly underexposed so I corrected the following shots using the compensation correction (I usually shoot in aperture priority). However, I preferred the cloud on the left in this one (and in Lightroom 4 it was easy to lighten). For following shots the cloud faded away quite quickly.

I have attached the original so folks can see what changes I've made. I always take in RAW and this is just the RAW file exported as a JPG by Lightroom. There were a number of dust spots to get rid of but other than that all adjustments were made in Lightroom 4." 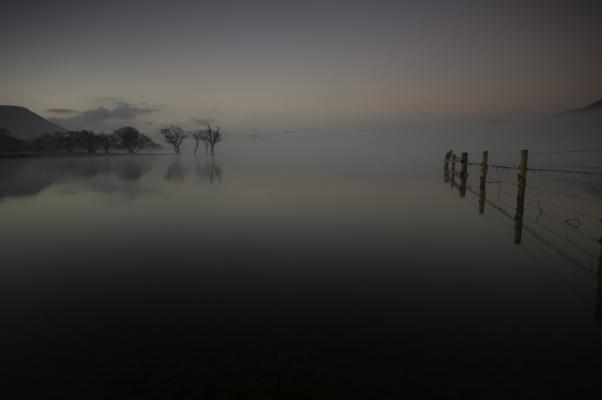