Making of "Reflections on Siskiyou Lake"

The winning entry in the January, 2013 monthly contest 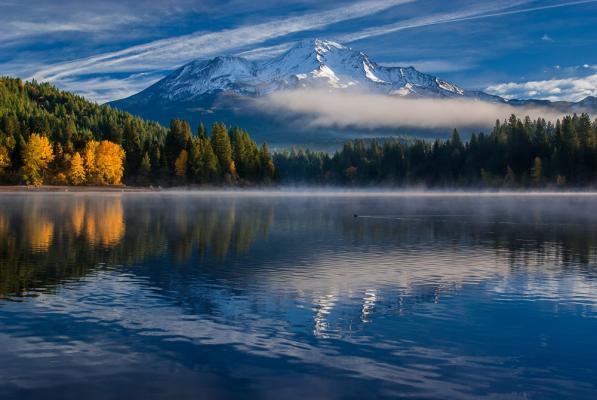 The image "Reflections on Siskiyou Lake" was taken on the first weekend of November, 2012. I had taken a number of images at the lake in recent years and knew the area well. Siskiyou Lake is a vastly under-rated place, perhaps the most scenic spot to photograph Mount Shasta, one of California's most photogenic mountains. I knew if the conditions were right, this place could produce images that might rival more famous (and over-photographed) places like Oxbow Bend and Wild Goose Island Overlook.

To get the shot I visualized, I would need still waters on Lake Siskiyou, morning light, some clouds, and snow on Mount Shasta.

I monitored Mount Shasta via a webcam to make sure the early season storms had dropped enough powder to create a sufficient snow mantle on Mount Shasta's immense flanks. Then I monitored the National Weather Service website and waited for the ideal weather conditions to fall on a weekend, when I could make use of it. Early in November, the weather forecast promised about as good conditions as one could hope for. A minor weather system was passing through over night, with the potential of leaving some clouds in the morning sky, without, however, producing so many clouds as would block out the rising sun. Light to calm wind was forecast as well, at least for the morning, promising the chance of reflections on a fairly large-sized lake easily rippled by the slightest breeze.

Siskiyou Lake is about a four hour drive from where I live. So I arose at 3 AM and drove the 210 miles to the lake. I arrived around 7:30 and headed for the shoreline, where I snapped dozens of images. I had the place entirely to myself for the next half hour. This particular image was the third I took after arriving at the lake.

From my experience using many lenses, good, bad, and indifferent, I have found that some glass renders colors better than others. For this image, confronted with so much color blue in the water, sky, and even in the mountain itself, I wanted a lens that rendered blue particularly well. The FA 24-90mm renders that color as well as any lens I've ever used, so that was the lens enlisted for this shot. I used a Moose warming polarizer filter to bring out the blue in the sky and warm up the bit of fall color on the other side of the lake.

Since my K-5 was recuperating in an Arizona camera hospital for wounds suffered in the field of action, I had to make use of my K200D. While the K-5 is superior in most respects to the earlier camera, the K200D probably enjoys slightly better color reproduction. Combined with the excellent morning light, all these factors contributed to produce an image with rich, vibrant, outstanding color.

In Lightroom I added a bit of blue and orange saturation, tamed the highlights and lightened the shadows.