The Making of "The Storm is Coming"

The winning image in our "Complementary Colors" photo contest 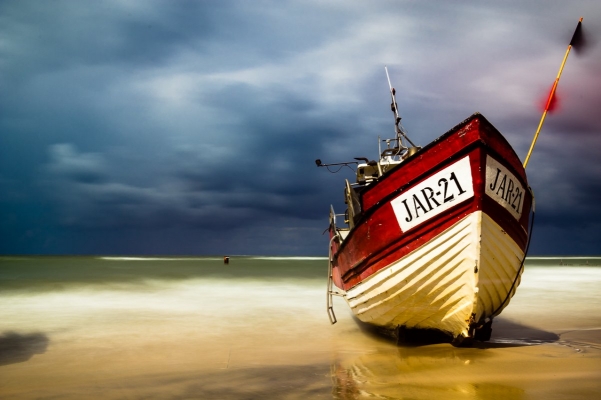 What a great message at the beginning of the week! Love to start a monday with such news. Would like to thank everyone who nominated and voted my photo "Storm is Coming" for the Complementing Colors photo contest in September on Pentaxforums.com.

This picture was taken during summer time in Poland. I was visiting a little village at the Baltic sea side called Jaroslawiec in northern part of Poland. I remember it did not look like it was going to be a perfect day for pictures. It was a really windy day and even raining from time to time. But it looked like something was going to happen - I was waiting for a storm and looking to find some nice theme as the forefront of my pictures. When I was walking down the beach I encountered the fishing port with a few boats pulled up on the beach. That was it I said to myself.

I mounted my K-3 on a tripod, attached the wide angle zoom DA 17-70mm F4 which is capable of capturing great colors and contrast. To show the movement of the water and clouds I decided to use a Hoya Pro Neutral Density filter ND 1000 which let me set the exposure for 15 seconds. To get the extra sharpness I set the aperture for F16.

My preference is to shoot in Manual mode in RAW format. And that was also what I did this time. To prevent movement of the camera in the strong wind I placed my backpack under the tripod to make it heavier. I also set the mirror-up mode to reduce unwanted vibrations. That was a perfect decision. I knew this was going to be a nice shot straight from the camera.

I usually don't do much post processing. I don't use Photoshop. Post processing for me is mainly done in Lightroom 5. I love this "has it all" program. I added some extra contrast, saturation and sharpness and it all resulted in a very nice effect. In the interest of saving disk space I do not save the original files so I'm not able to show you how the image looked before post processing.

Once again thank you for nomination.