The Making of "Aerobatics"

The winning image in our "High Speed" photo contest 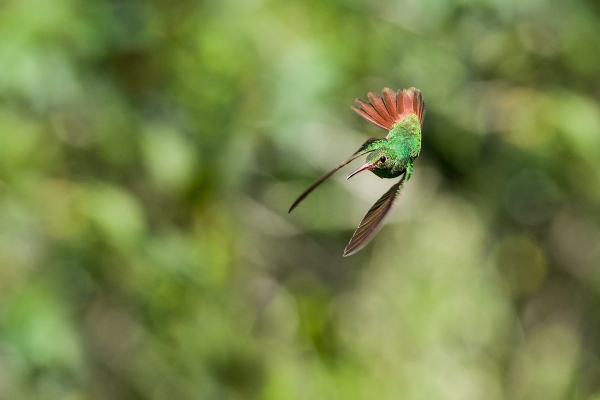 First of all, my heartfelt thanks to everyone who nominated and voted for my photo. I truly appreciate your support, and feel honoured to have shared the stage with the excellent submissions of my fellow entrants in the August contest.

This photo is the product of an afternoon spent in the gardens of the Green Hills Butterfly Ranch in Cayo, Belize, where a battery of feeders brings in a never-ending procession of members of a half-dozen hummingbird species. I’m especially pleased to have a hummingbird as the subject of my entry because I have his cousins to thank for two of my university theses, for which I built computer-controlled feeders with miniature sensor arrays to study their feeding behaviour.

Not nearly so much premeditation went into this hand-held photo. Primarily, I was just lucky that such a dramatic mid-air manoeuvre landed on my sensor … not to mention fortunate enough to have the 8.3 fps of my K-3 under my trigger finger. To lock in the focus it also helped that I have deactivated auto-focus on the shutter button, always using the rear AF button instead. All this didn’t compensate for my reaction time being no match for a hummingbird’s flying skills, and fewer than 1% of my shots from that session were usable; good thing that storage is cheap!

A standard tactic for capturing a hummingbird in flight is to position multiple low-powered flash units to freeze the action while avoiding washing out the bird’s iridescent feathers, but thanks to the K-3’s performance at ISO 1000, natural light was all I needed to drop to 1/1600 s at f/7.1. That shutter speed is more than fast enough to stop a hovering hummingbird’s body while preserving a blur on the wingtips, a motion effect I find desirable.

For shots like this I often try for f/8, plus or minus a stop or two, to get a little wiggle room on the focus point (i.e., more DOF), and also because I’ve found it to be a bokeh sweet spot on the DA* 300mm, which remains my favourite lens for wildlife photography. Equally important with this shoot was situating myself in the right orientation relative to the bird and the sun to get that lovely metallic gleam from his feathers.

The main intervention in post-processing was cropping the original image approximately 30% to place the bird’s head roughly at a golden ratio intersection point, after cloning the background vegetation from deleted areas over the feeder, which occupied the left third of the original. I could have cropped the photo closer around the hummingbird to avoid having to clone out the feeder, but I considered it important to give him this much visual space for his aerobatics.

The exposure required virtually no adjustment, though I applied a hint of an S-curve in PS CS6 to boost contrast. ISO 1000 is the threshold above which I usually prefer to do my noise reduction in Topaz DeNoise instead of ACR, but in this case the default ACR settings yielded decent results.

I considered the attractive OOF background essential to this photo, so to keep it soft I isolated the hummingbird to his own PS layer using Topaz ReMask before sharpening him in Topaz Detail. After resizing the image to final dimensions, I applied a hint of output sharpening to the isolated hummingbird layer using Focus Magic. Lately I have been doing this as a standard finishing step in virtually all my photography, using masks and/or reduced opacity of the Focus Magic layer to avoid overly harsh results.

Thanks again to all who gave a nod to this photo; it has been fun reliving my time in Belize!