The Making of "Autumn Scene"

The winning image in our "Colorful" photo contest 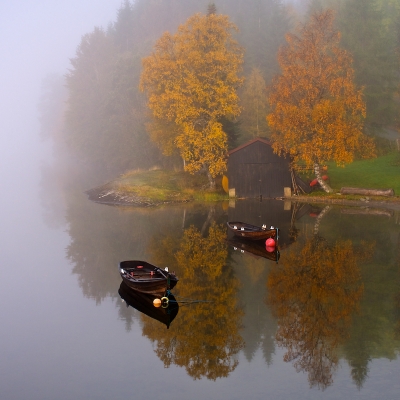 First of all, I want to thank all of you that voted for my photo in the October 2015 competition. I am very proud that my photo excelled in competition with so many great photos!

On Sunday October 11 I had planned to get up very early and go for a photo hike around the Trondheim area, near where I live. The sun rose at about 0900 this morning, and when I got up at about 0530, I could see that there was mist/fog covering most of the Trondheimsfjord. In fact, the misty conditions were so severe that the airport at Værnes closed down during Sunday, and also the following Monday. After having had breakfast, I packed my photo equipment in my Saab and drove off towards Trondheim.

I initially planned to take some photos of the wharves by the Nidelven in the centre of Trondheim, and here the conditions were very misty, dark and gloomy. Afterwards I drove up to the large lake Jonsvatnet, which besides being a very beautiful lake, is the main reservoir for drinking water for the people of Trondheim. At Jonsvatnet I found a nice spot to take some photos, and I unpacked and set up my photo gear, and waited – hoping for the sun to start shining through the fog. After having waited half an hour or so, there was some movement in the fog and indeed the sunrays started to penetrate the fog. At this moment I took a series of shots including the one I submitted for this competition.

For planned photography outings like described above, I usually bring my Pentax 67ii system, the Pentax K-5 with a few primes, film, filters, and a tripod. I love shooting slide film with the 67ii, my main film being the Fuji Provia 100F. I try to capture the same settings or scenes with both medium format film and the K-5. In this way I also have digital versions if my slides end up being complete failures. For the “Autumn Scene” shot, I used the K-5 with the SMC Pentax K30/2.8 lens fitted with a B+W ND graduated filter (0.6), in order to compensate for the darker reflections in the water. I previously have used the K28/3.5 lens a lot, but I find the K30/2.8 to be an even better lens. In fact, I would be tempted to use the adjective “outstanding” to describe this lens, the sharpness and colour rendering is second to none.

When looking through my shots from this location the main difference between them is the placement of the boats. Even though the water was seemingly absolutely still, the boats moved around ever so slowly. There are only a few shots where the boats are in such a nice position as they are in the “Autumn Scene” shot.

Since I often shoot the same scenes with medium format slide film and DSLR, I have ended up trying to use the slide versions as benchmarks for digital editing (if the slides are well exposed, that is), to try to emulate the slide tonality into the DSLR image. I study the slide with a loupe on a light table, and try to edit the scanned slide or digital K-5 raw file with the slide as a reference. Other times the precise white balance of the K-5 can be very helpful when I have difficulties with setting the white balance of film shots, especially with colour negative film.

I still use the Apple Aperture photo editor, and with the “Autumn Scene” image I set the white balance, adjusted levels so that the tones of the image were evenly distributed, added some saturation and finally added a bit of edge sharpness.

The most important editing element in this photo is probably the square crop. After having tried many different ways of cropping the image, the square crop made all the elements function as a whole. The square crop also put the foremost boat in the centre of interest according to the rule of thirds. 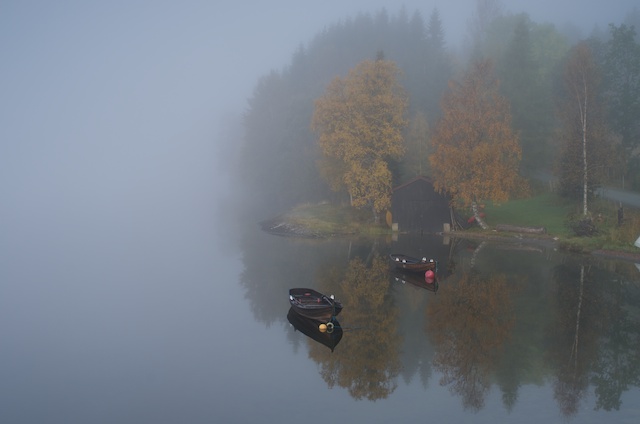 In many ways I take a rather conservative approach towards photography, where I put as much emphasis on the actual shooting as possible. I try to get it right there and then, instead of having to spend hours in front of my computer manipulating the photo. For me as an amateur landscape photographer, the most fun lies in the outdoor nature experience – in company with Pentax!

Finally I'd like to present another two photographs from the same morning as "Autumn Scene":