How the winning photo of the "Birds" contest was made 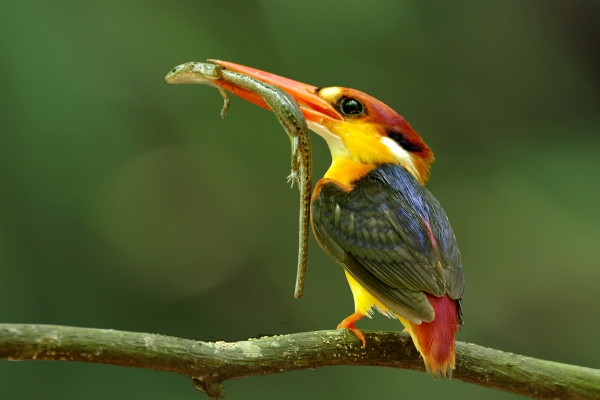 Thanks to everyone who nominated and voted for my photo in October 2021’s “Birds” contest. To me, every bird photo that was nominated for the poll is a winner!

I started my first DSLR photography with Pentax K-x in 2010 and I soon fell in love with photographing birds more so than people as I find shooting birds more challenging and there’s a sense of satisfaction if I can get a good shot with details as birds are unlike humans who can wait and pose for the photographer to shoot.

My first long lens was the Pentax-DA 50-200mm F4-5.6 which I found too short and therefore sold off to get the DA L 55-300mm and DA*300mm. After shooting the local birds for almost one year I began to look for more colorful and exotic birds to shoot. With a few other birder friends we went overseas to shoot. 3 months before the first overseas birding trip I knew that 300mm is not long enough for smaller birds so I ordered a Sigma 500mm F4.5 from local distro and luckily it arrived 1 month before the trip giving me a bit of time to practice hands on. I also invested in a more heavy-duty carbon fiber tripod and gimbal head.

After the first overseas birding trip I got addicted and went once or twice every year with minimum 5 full days of shooting.

This Black Backed Kingfisher was shot on May 2015 at Kaeng Krachan National Park during one of these overseas birding trips. This Park covers an area of 2,914 km² and it is the largest national park in Thailand. It is popular for wildlife watching and was recorded to have around 480 bird species, 120 reptile species, 300 butterfly species and mammals such as leopards, tigers, bears, deer, elephants etc.

This was a well planned trip as I and a birder friend choose to go during the nesting season February to August, depending on the bird species, of course. Kingfisher breeding begins in April and lasts through July.

It was not hard to locate the shooting location of this bird. When we reached the park we immediately saw some birders with big guns pointing at the birds' landing perch. Luckily, we managed to secure some space to setup our gear. Usually we would be inside a camouflage hide for better reach to shoot, but the perch was 2-3m below us and just 5m away from us so there was no need to use a hide as the bird probably wouldn’t notice our presence.

Being a small fast-moving bird, it will usually be tough to shoot him in the wild, but this is nesting time where the adult bird needs to feed the 2 chicks regularly and frequently. The bird will find food and will land on the same perch, stay for short while and then fly into the nest to feed the chicks. It is really a joy to shoot this colorful bird as each time it will land on the perch with different catch like lizards, spiders, grasshoppers, small snakes and even scorpions! I’m surprised how big eaters these chicks are; the parent bird is feeding at a rate of 3 times per hour.  I was there for 3-4 hrs with quite a couple of nice shots with different catch (except scorpion).

I shot using a Pentax K-3 + Sigma 500mm F4.5 on gimbal head mounted on tripod. The tripod was set at a low angle with the lens pointing downwards at the perch. The shooting mode was TAV, using widest aperture of F4.5, auto-ISO and the shutter speed was set to 1/150 sec at turbo burst shooting mode. Initially I set the shutter speed at 1/2000 sec, hoping to capture some action landing shots but the relatively low lighting resulted in an ISO setting higher than 3200.

When I started to capture some shots, I slowly lowered the shutter speed for better ISO, observing the bird’s behavior: when it landed on the perch, it would stay for a while before flying into the nest. I could therefore lower the shutter speed to 1/100 sec and 1/80 sec. For this shot I tried my luck and lowered to 1/50 sec with Shake Reduction off and using mirror lockup to reduce motion blur due to the slight vibration caused by mirror flip.

On certain spots of the scene there were a bit of harsh lighting, so I waited until the harsh lighting was gone and snapped some shots with lower shutter speed for cleaner shots. Unfortunately, this shot was recorded on the 2nd SD card and it became unreadable after I processed the photo. I am thus unable to show the before and after post processing for comparison. I stacked this photo onto one without harsh lighting so that I could fix the harsh lighting using Photoshop’s layer and masking.

There were 2 distracting branches at the top left corner which I easily could remove with Photoshop’s content awareness and cloning tool. After that I adjusted the Level and Exposure and applied a bit of noise removal. I also sharpened a bit on the eyes, beak, lizard and the wings. As this is a nature shot I did not adjust any colors. My image should show natural colors and not tweaked colors.

As the name of this bird is Black Backed Kingfisher, this birding trip wouldn't be complete without having the back in view showing the “Black Backed” of the bird with eye contact and I am glad that I got it! The catch of the lizard is a bonus!

Thanks again for voting for my image.