The Making of "Coronado's Gold"

How the winning photo of the "Panorama" contest was made

Thanks so much for your nominations and votes in the April 2021 "Panorama" monthly contest!

I'm a weekend photographer, but sometimes my day job sends me beyond the SF Bay to other interesting places.

I had 3 days in San Diego for a downtown conference and could only bring a very abbreviated kit: my Pentax K-3 II with 2 lenses, and a tiny travel tripod. Needing to be at the conference early and in business attire, I decided to try for a morning blue hour shot from Coronado Island, looking back toward the curvy Coronado Bridge. The plan was to grab the shot and hurry downtown to work after.

Several years prior, while vacationing on Coronado Island, I happened on this tiny strip of sandy beach at the Tidelands Park: 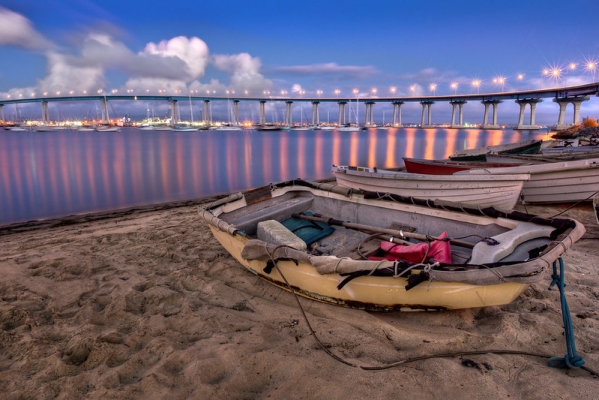 Since I had packed my Sigma 8-16mm, I decided a similar wide shot featuring the bridge, with a dinghy or two in the foreground, might be in order. I arrived at the beach, mostly forgetting I would need to navigate deep soft sand wearing suit trousers and dress shoes, ugh. Approaching barefoot with pantlegs rolled up (ha!), I observed the morning fog layer was very thick, obscuring the bridge as well as most of the beach itself. In fact, the planned dinghy shot would be weak without any view of the bridge beyond. This gloomy, damp morning may be a bust, I thought.

With no change to the sky, the time for sunrise came and went, and as I stood there contemplating the situation, suddenly the sun began to poke through the thick grey layer. As the fog thinned, I began to make out the masts of anchored sailboats just offshore, dozens of them. Perfect! 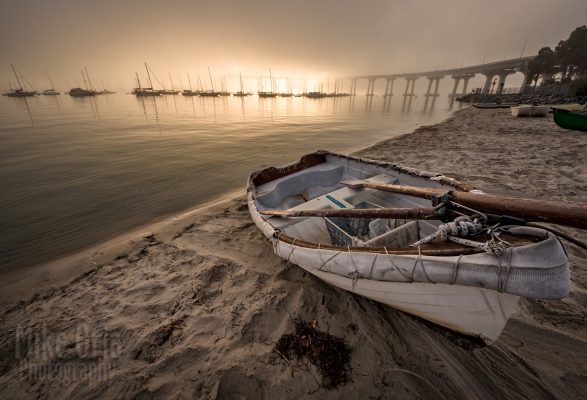 I decided to grab the only other lens in my bag, the smc Pentax-FA 77mm F1.8 Limited, and set up a long pano strip featuring the silhouettes of those sailboats filtering the marvelous golden light. It was clear the fog was thinning rapidly, so I made a quick left to right pass with plenty of overlap. Because the light across the frame was consistent, I only needed to meter for a light section of the water, and the camera did the rest. Aperture stopped down a bit to F10 to grab some of the water texture in focus, ISO 160 and 1/800th sec shutter, due to the sun being in the frame. The raw frames looked like this (click image to enlarge): 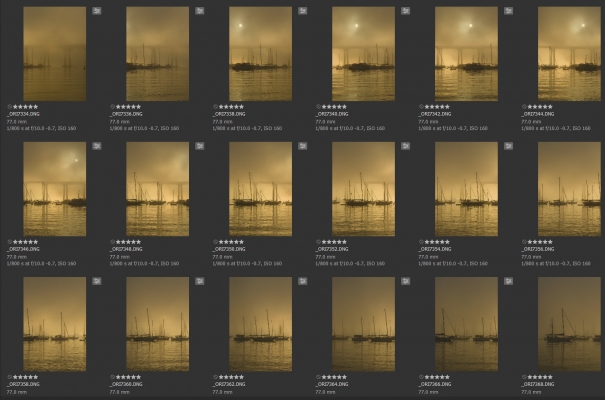 Back home, I fed 18 frames into Photoshop for pano stitching, which gave me this image:

I used Nik Viveza to add some contrast and boost the saturation and brightness a little. For the purpose of the Pentax Forums 4:1 ratio rules, I also cropped some from the top and bottom of the frame. Final result: