The Making of "Framed at OMSI"

How the winning photo of the "Cityscape, Framed within a Frame" contest was made

I live in Colorado but I travel for work (and fun!) periodically. In September 2015 I had a software conference to go to in Portland, Oregon. I often go out in the evenings at these events to unwind and shoot some photos of where ever I happen to be.
This evening, I met up with fellow forum member, stevebrot, for some dinner and an evening photo walk by the river. It was a nice, mild night and the new Tillicum Crossing bridge had just opened so we shot around there and then worked our way upstream. We came upon the Oregon Museum of Science and Industry (OMSI) which just happen to be one of my software clients as well. They have this old sub permanently parked there as one of their attractions. 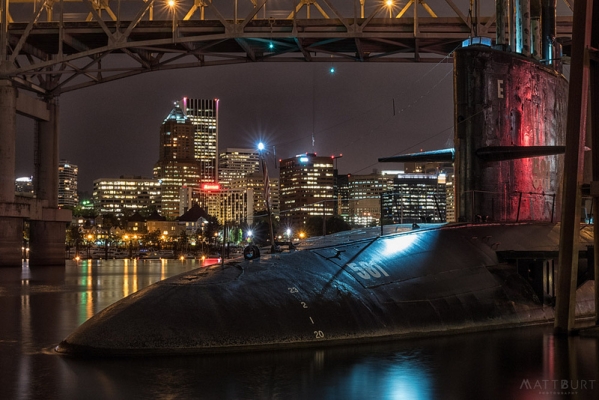 I was shooting my relatively new Pentax K-S2 (RIP) and prime trio (DA 15, DA 40, FA 77) which I often used for a compact travel setup with a Manfrotto BeFree travel tripod.

When we came upon the sub I noticed an open gate leading to the floating dock which I thought might make for a good shot of the sub. It was a good waterfront city view behind it which included the Marriott I was staying in.

I wanted a long exposure to smooth the water but the challenge was finding a calm enough moment to do it on a floating dock. A few boats passed and I had to try several times before getting this nice still moment using the DA 40. The exposure was 13 seconds, F13, and ISO 400. The red light just out of the frame added some foreground color that tied in nicely with my hotel sign in the distance. The 40mm framed up the scene just right with the bridge in the background. I knew that if I overcame the challenges that could ruin the shot like movement, this image had potential to be a good one.

For processing, I used Lightroom 5 and Nik Color Efex pro. As you can see from the original, the processing was relatively light. Mostly boosting shadows a little, adding some color contrast and detail extractor, and leveling the horizon. 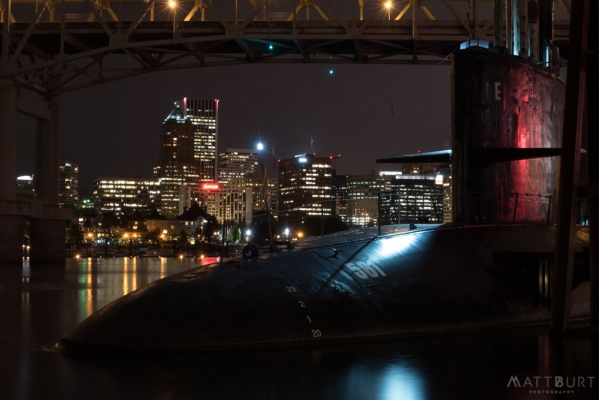 Thanks to everyone who voted for my photo and thanks again to stevebrot for being my tour guide that evening. It was a lot of fun and produced some nice images. Nice job to all the other competitors for a great collection of photos in this contest!

About The Author
mattb123

I'm a software engineer and photographer living in Gunnison, Colorado. I've been making images for as long as I can remember and love getting out into the beautiful landscapes I live near...
More articles by mattb123 →