The Making of "French Quarter Streetcar"

The winning entry in the June, 2013 monthly contest

I love doing photography in New Orleans.  New Orleans is a paradise for photographers, so much to see and around every corner there is always something worthy of a photograph.  The photo of the streetcar is one that I had been hoping to take for several years; a streetcar at night in fog rolling off the Mississippi River. 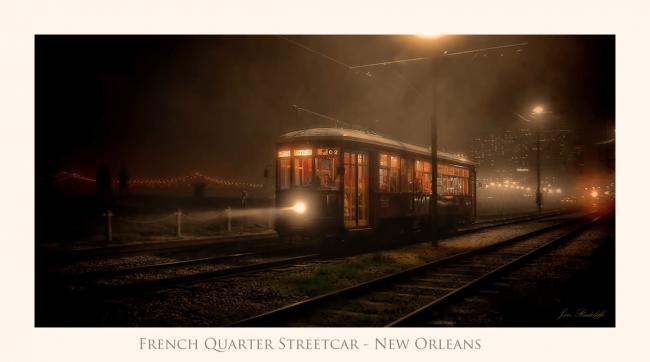 This was my first visit to New Orleans with my Pentax K-5 IIs.  The weather forecast was for rain and drizzle the night I took this photo.  As I walked from the parking lot near the French Quarter I crossed the tracks of the streetcar line and saw a streetcar approaching in the distance.  As it got closer I began shooting but did not have the ISO set high enough for the low light.  I ended up with a blurred image but I could tell the shot would be a good one if I could avoid the blur caused by the slow shutter speed so I upped the ISO to 3200 and decided to wait and try again.  The streetcars run about every twenty minutes so there was quite a bit of waiting for another streetcar to pass.  This allowed me to experiment with ISO and shutter speeds for the ambient light.

Finally, after two more attempts and about a one hour wait, I was able to get this photo.  The interior lights of the streetcar spilling light on the ground as it passed and the headlight sending a piercing beam of light through the fog.

Post processing was done in Photoshop CS6.  I was shooting RAW and brought the DNG file in for editing, which consisted of using two adjustment layers, curves and hue/saturation.

I did crop the photo but probably could have taken a little more out of the top as some have found the overhead light to be distracting. I re-sized for the web, sharpened a bit and then ran a small bit of noise reduction on the photo before uploading it.

the making of the winning entr, trains