The Making of "Gaze"

Winner of the December, 2016 "Portrait of a Stranger" photo contest 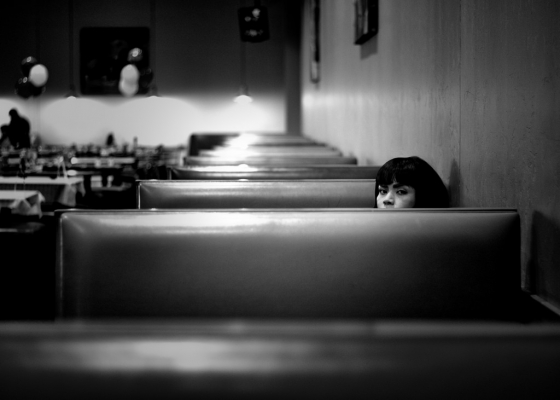 First I’d like to thank everyone who nominated and voted for my picture on the forum. It is a terrific honor and I’m grateful.

I try to take a camera with me to every event I go. I usually opt for an inconspicuous one but for a while I was taking my yellow brick K-01 and a small prime around with me, in part for its uniqueness but also to try to accommodate the awkward little thing into my style of photography. I figured a 1st grader’s birthday party at Peter Piper Pizza (Arizona’s local Chuck E. Cheese equivalent with beer) would be a good place to get some portraits of my kids, and to attempt some street-style photography.

I’ve always been drawn to the beauty, humanity, and realism of street photography, and often fantasized about successfully telling visceral human stories with my favorite visual medium. I took my fantasy so far that I even purchased a Ricoh GR, because if I was going to do it, I wanted to do it “right”. As it turns out successful street photography takes a lot of bravery and social skills, two things I generally lack around strangers. It didn’t take long for me to realize that street just isn’t for me, but I haven’t given up all hope. I always have a camera with me in public, hoping that a perfect street moment will present itself without forcing me beyond my self-imposed social boundaries.

Which brings me to the birthday party. I took the requisite pictures documenting the cake and the presents and the rest, as well as a handful of candid portraits of my kids. The party began to wind down as the afternoon wore on. Most of the other pizza party crowds had already left, and all the first graders at my party were busy playing arcade games. The giant pizza dining hall was looking more empty by the minute.

As I polished off my last pizza slice, I stood up to get a soda refill. As I stood, I peered right over the booth in front of me and saw my shot. I immediately sat back down and grabbed my K-01 with my F 50 1.7 attached. I didn’t bother to change settings (TAv mode, ƒ/1.7, 1/80, EV -0.7) from what I had used while taking portraits of my kids (a bad habit of mine). From my booth seat, I slowly stood up on my knees, once again peering over a seemingly endless row of empty booths. They were empty all but one, which housed a young, morose looking woman staring at her phone. She looked totally out of place, like she’d stopped in for a bite after a night on the town, though it was a Saturday afternoon at a kid’s pizza arcade. It was all too perfect.

I started firing away, taking about four shots, holding my camera in portrait orientation while she looked down at her phone. Portrait worked best in my mind considering the elongated rows of empty booths I was trying to incorporate. 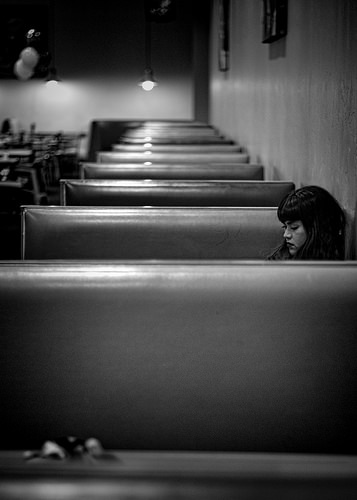 I figured I’d taken enough shots when I turned my camera to landscape. I regularly change orientation when shooting to get a couple shots with an alternate perspective so I have options. As I turned my camera and began depressing the shutter button, she turned her head towards me as if she knew what I was doing. My camera caught her mid head turn.

Being the evasive and fearful not-so-streetworthy photographer I am, I immediately began to sit down as if I was caught doing something I wasn’t supposed to be doing. As I moved back down into my seat I fired off one more shot before my camera set over the booth’s horizon. That last picture was the one I entered in this contest which I am writing about now. I was lucky to get eye contact and to capture her gaze before being hidden behind the booth. Every time I successfully shoot a stranger making eye contact with me who doesn’t react negatively (pretty much every time), it serves as a reminder that my fears are unfounded and chisels away some of my apprehension toward photographing strangers.

On to the technical stuff, but first a disclaimer. As some of you may know, I had this and most of my other pictures stolen from me during a cross county trip over the summer (cameras, laptops, external drives stolen), so I unfortunately cannot share with you my original picture nor do I have record of my post processing edits. I’ll explain what I did by memory to the best of my ability.

I always shoot in DNG or DNG+, even when I’m just messing around. Even when I’m not trying to be artsy I sometimes want to turn my just-for-fun pictures into something artsy after the fact. So this picture was a RAW file that I ran through Lightroom like I do all my images. I nearly always have a certain look in mind when I’m processing, but just to cover the “what ifs” I play around with most of the Basic, Tone Curve, Lens Correction, etc. sliders in LR to stay open to artistic inspiration. For this image, I knew I wanted a street photo look and in my mind the only street photo look is high contrast black and white.

I started with a slight crop of the left and top to bring it together, and toned down some of the blown-out whites from the lights in the background. They were too big and bright and drew the eye away from the subject. I then gave it a touch of Clarity, and bumped up the contrast like crazy. I then ran it through Topaz B&W Effects 2 because it affords me a ton of control and really allows me to pin down the exact monochromatic visual effect I want. Lastly, I topped it off with a little vignette, and voila. I achieved my indoor street-style photo and I’m excited to see that it appeals to a broader photographic community beyond myself.