The Making of "Lateral Growth"

The winning image in our "Trees" photo contest 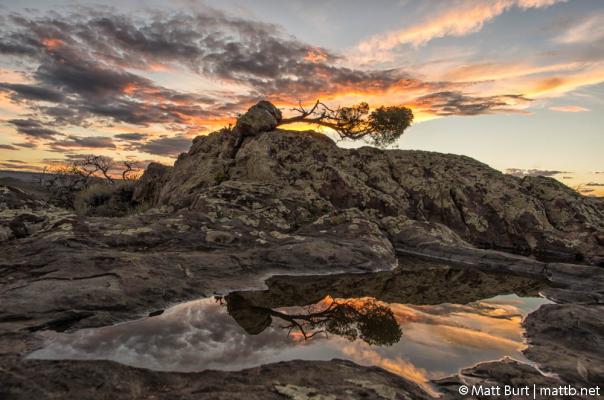 This photo was taken at a place called Hartman Rocks Recreation Area. It's an area a couple of miles from where I live in Gunnison, Colorado that has a big network of hiking, biking, and ski trails. It’s a great amenity for our very active community and also just one of my favorite places to be.

I’m a mountain biker and during the long summer days I ride those trails after work for fun, my health, and my sanity. I almost always have a camera along in my pack as well. When the clouds or light are looking good I’ll stay out through sunset and ride home in the dark with a headlamp. Usually I just bring the camera (K-5 in this case) and a small prime or two, usually the DA 40 and DA 15 Limiteds.

Late last summer we got more rain than usual. Hartman Rocks which is typically dusty dry desert really greened up, and in flat rocky areas we got some persistent puddles. Puddles are very unusual in the area so on this particular night with puddles present and what looked like an interesting sunset coming I had to stop riding and shoot for a while.

I shot this area with a lot of different shaped puddles for a few minutes, mostly getting the alpenglow in the East where the exposure is easier to control because of lower contrast between the landscape and sky. After getting what I felt were going to be some good shots facing East I started packing up. The light was starting to fade and I knew it was going to get chilly on my ride home. I turned around and noticed this interesting and probably very old juniper tree had been behind me the whole time. It had this nice puddle below it and I knew I just had to get the camera back out for a few more shots of my newly discovered subject.

Shooting to the West now, the foreground was in shadow and the sky was brighter than it was to the East. I figured it was worth a few frames of the tree and puddle with those good clouds so I took a few more shots. I exposed for the sky, not wanting to blow it out. This left the foreground rocks very underexposed. I also put my subject relatively centered in the frame which I try not to do too much, but to get all the elements I wanted without ones I didn’t want, it kind of had to work out this way. Reflections seem to be more forgiving of a centered composition so I had that going for me too. I shot this at 1/50s, f/10, ISO 200 so I’d get good DOF but still be able to hand-hold it.

Once I downloaded my images I saw that my other shots did come out pretty well, but I was intrigued with this tree shot. I felt it was flawed being so underexposed but decided to see what I could do with it anyway because the tree was so neat and the puddle probably wouldn't be there long. 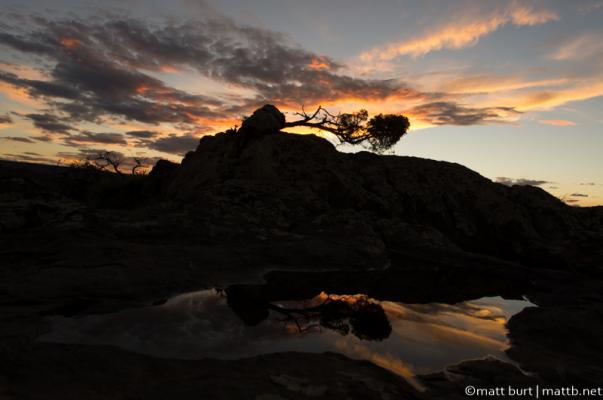 The image as it looked when first downloaded

I straightened it and boosted the exposure and shadows in Lightroom. This helped lighten and balance it out, but it still lacked detail in the wonderful lichen growing on the rocks. 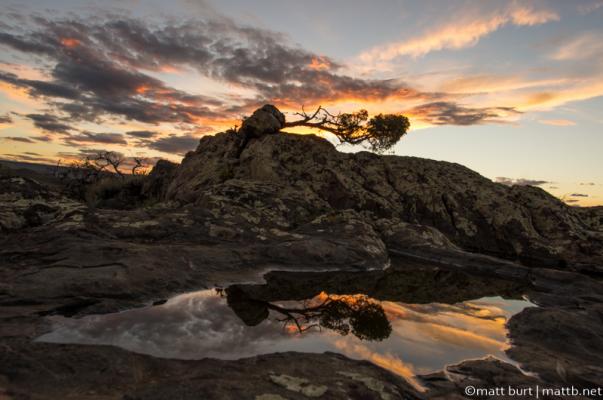 For the final touches I opened it in Nik Color Efx Pro 2 and applied the Brilliance/Warmth filter and Detail Extractor to bring out the foreground texture details.

The final product was something I was happy with, although it involved more processing that I prefer to use, it was the best I could come up with. I found the subject so interesting I had to make this image work the best I could.

Looking back I could have made it better if I used a ND Grad filter to balance the sky and foreground at the time of capture. A tripod would have helped too and I prefer to shoot landscapes with one, but I also prefer not to mountain bike with it.