The Making of "Merlot Dawn" 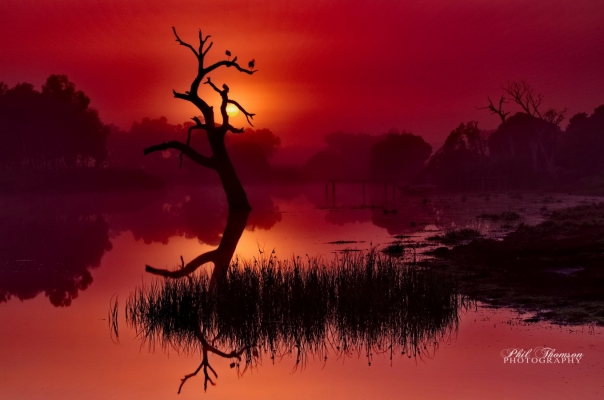 Thank you most sincerely to everyone who nominated and voted in the Pentax Forums ‘Dominant Colour - Red’ for my image ‘Merlot Dawn.’ I am honoured and humbled and it has been a very precious favourite of mine, and one of my most popular images for a number of years.

It was captured a few years ago now on a very foggy morning at one of my favourite locations, The Minya Winery near Torquay on Victoria’s Surfcoast and Great Ocean Road. Minya in Aboriginal means the place of many birds, and they have documented around 150 species there. I am privileged to be allowed to go onto the property at anytime of the day to photograph wherever I like.

I had photographed that dead tree at that location on a number of previous occasions, usually at dawn, with the sun rising from that direction in relation to the tree & creek. It is just at that time of the year around the Equinox, that the sun rises in pretty much the right spot over the creek waters, to be able to position myself to have it located through the branch. Also a fog had settled over the creek waters, which will happen in that Connewarre area with the right weather conditions. The other Blessing & bonus was that the creek, Thompsons Creek, that runs through the winery property was in flood, after quite some years of drought conditions, so thus I was able to get the tree reflecting in the relatively still waters in the foreground.

As I was shooting directly into the sun and to make sure of smoothness in the water, I did use CPL, plus an ND8 filter, along with the GND filter, that I use 99% of the time with my landscape images. I was shooting with my 55-300mm lens, as initially I thought being positioned where I was to get the tree reflection I may have had to zoom in a bit. I did end up with wet feet as I had to walk through some shallow water & reeds to shoot at that spot. I also, to some degree, was trapped as I was up against a barbed wire fence, when shooting the horizontal format, after the verticals and it was thus difficult and resulted in shooting at the 55mm end of the lens. I was rather fortunate too that the three birds decided to roost in the tree for those few moments whilst I was shooting.

Post processing was done with ACDSee Pro4. I have been using ACDSee Pro products since I switched from film to digital in 2007.

With this image and the software tools that were available in the program at that time, I adjusted the exposure, as I had possibly underexposed the shot, so as to not blowout/overexpose the sun, then increased the contrast only very marginally, subdued the highlights a little and increased the vibrance by a small to moderate amount (my usual settings). The white balance was as I shot it, which was at basically the colour temperature in those conditions. In the Light Equaliser channel, I evened the overall exposure by darkening the highlights moderately, and increasing the shadows marginally. With the Colour Equaliser, I darkened the red and the yellow channels; then set the Details tool, which includes sharpening & noise control, to the 100 ISO preset that I have made in the program. 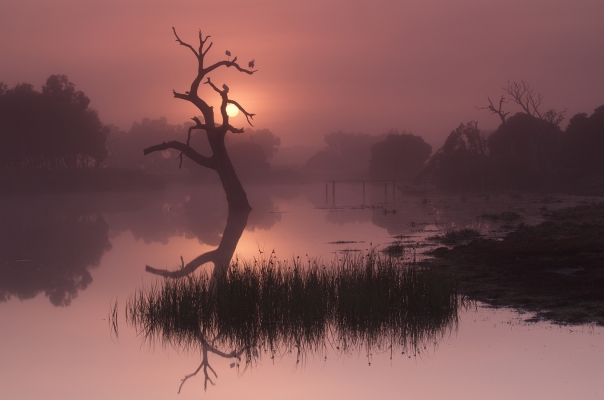 I have been photographing on and off for about 45 years, coming up through the film days, including transparencies, colour neg both 35mm & 645 and B&W, and as I said earlier switched to digital around 2007.

I just love being able to be out amid Creation capturing what I see and am presented with, particularly at sunrises & sunsets and during some very interesting weather situations like storms, rainstorms, rainbows and the like. I have been Blessed to capture some very precious moments including this one, and where I live in Australia, some fantastic locations, including many "on my doorstep".

Once again, many thanks to all who nominated and voted for my image on this wonderful forum.