The Making of "Mystic Lake"

My friend and I decided to drive to the mountains, in San Bernardino, here in Switzerland to shoot the night sky. It was the first cold night of the ending summer but with my Pontiac Trans Am and some great ‘80s music the night was on fire.

After about 45 minutes of driving we were there, in the front of the small lake and the Milky Way, everything was perfect for a great shoot session, like the warm lake that created a constant moving fog, the short woody dock and the swamp (my poor shoes after discovering that it wasn’t only grass). Between every snaps the moment was perfect to tell horror stories, maybe the best one for the location was “The Creature from the Black Lagoon” and the like. 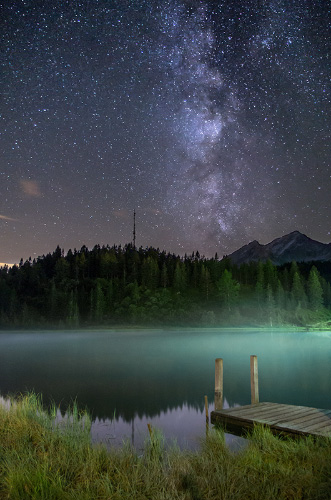 After an hour of shooting and wet foot we decided to drive back home, but the show wasn’t over: in the middle of the trip something very bright cracked the sky, it took me few seconds to realize that it was a shooting star. What to say…amazing night!

The final picture is made from two photographs, one to capture the Milky Way done with a “short” exposure (20 s)  and another one with a long exposure (195 s) to reveal the foreground. The lens that I used to shoot was the kit lens used at f3.5 and quite high ISOs. The post processing took me a little bit of time to blend both pictures together and to reveal the Milky Way.