How the winning photo of the "Dramatic Sky" contest was made 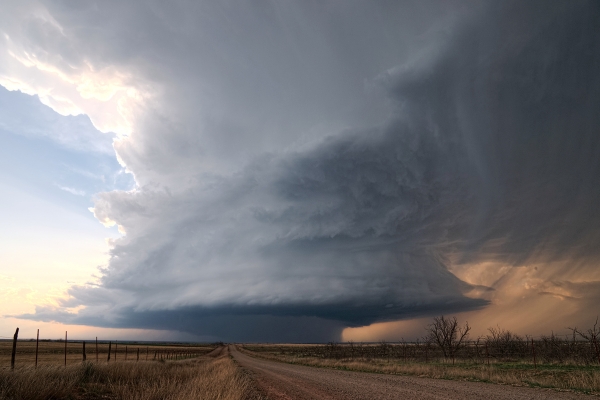 First off, thank you to everyone who voted for my image among this great group of entries. As a meteorologist who lives in the stormy plains of the central United States, this theme was near and dear to my heart.

I've been a 'storm chaser' for over 25 years now, both in my personal and work life (I work for the U.S. National Severe Storms Laboratory). Over that time I've attempted to capture the drama that often unfolds in the springtime skies in this part of the world, first with Pentax film cameras in the late 1990s, to a K200D, a K-5, and currently a K-70. I've captured many of these images while on duty and I've always adhered to our rule that these are forbidden for commercialization and personal copyright. This image was an exception, produced after work and without any field work obligations. Making this one special is that my 80-year-old Dad came with me (willingly). He got the storm chasing experience as you'll see below.

Forecasting when and where these types of storms (supercells) will be, and safely getting to the right place at the right time to photograph them, can be frustratingly difficult. But this early April day in 2019 was different; the uncertainty in the forecasts was unusually low and pointed to an isolated supercell forming a few hours before sunset a few hours drive from home. Furthermore, this one was expected to move quite slowly, a situation that greatly helps to photograph them on your terms, so I couldn't resist the opportunity.

About 5 pm that evening a storm indeed developed and matured in about the place and time it was predicted, and it behaved as predicted. This doesn't happen very often! We decided to set up directly ahead of the storm along an unpaved road that was packed with gravel, as you don't want to get stuck in the mud around these storms. I had my Pentax K-5 with DA* 16-50 with me along with my Fujifilm X-E3/Samyang 12mm f/2 for stills. This image is actually one of thousands taken for a time lapse of the storm as it approached. Here's a shot I took with my X-E3 showing the set up, and my Dad as a willing foreground element :) : 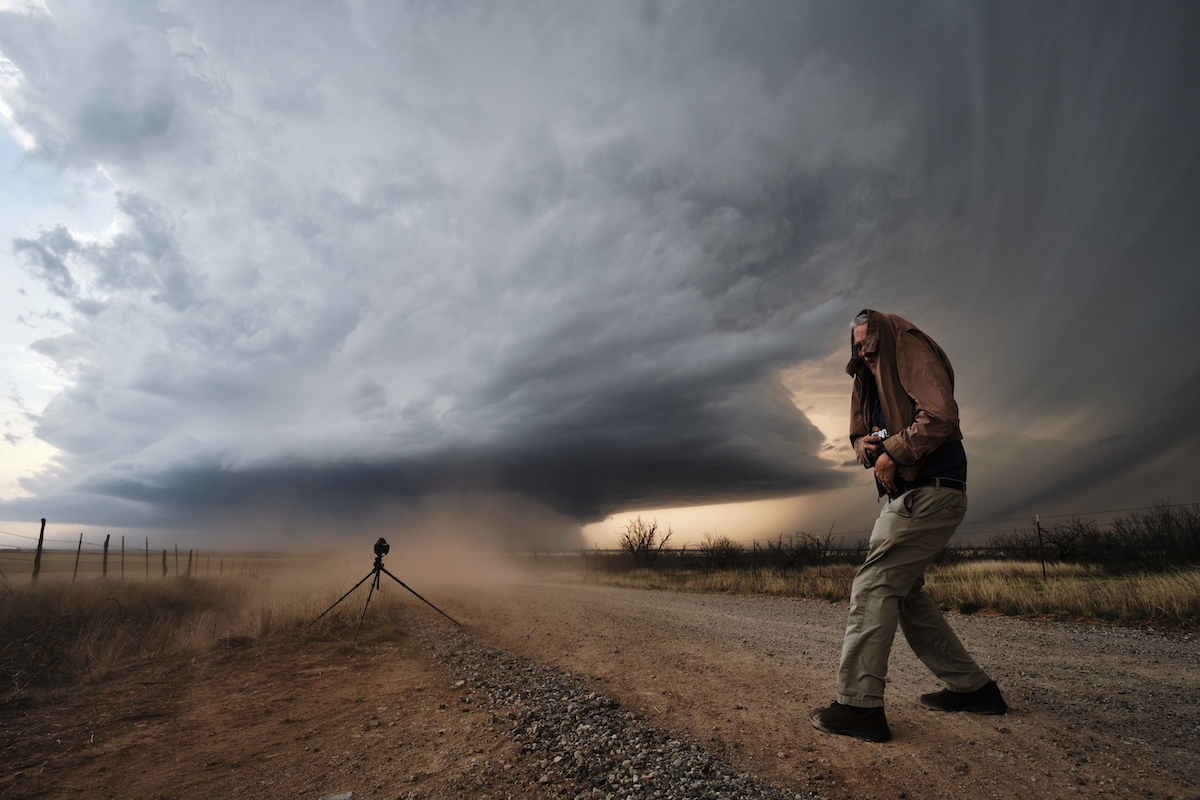 That's my K-5 on my tripod, mounted low because the winds blowing into the storm were fierce. In fact, a tumbleweed rudely ended my time lapse when it smashed into my tripod on its way into the storm: 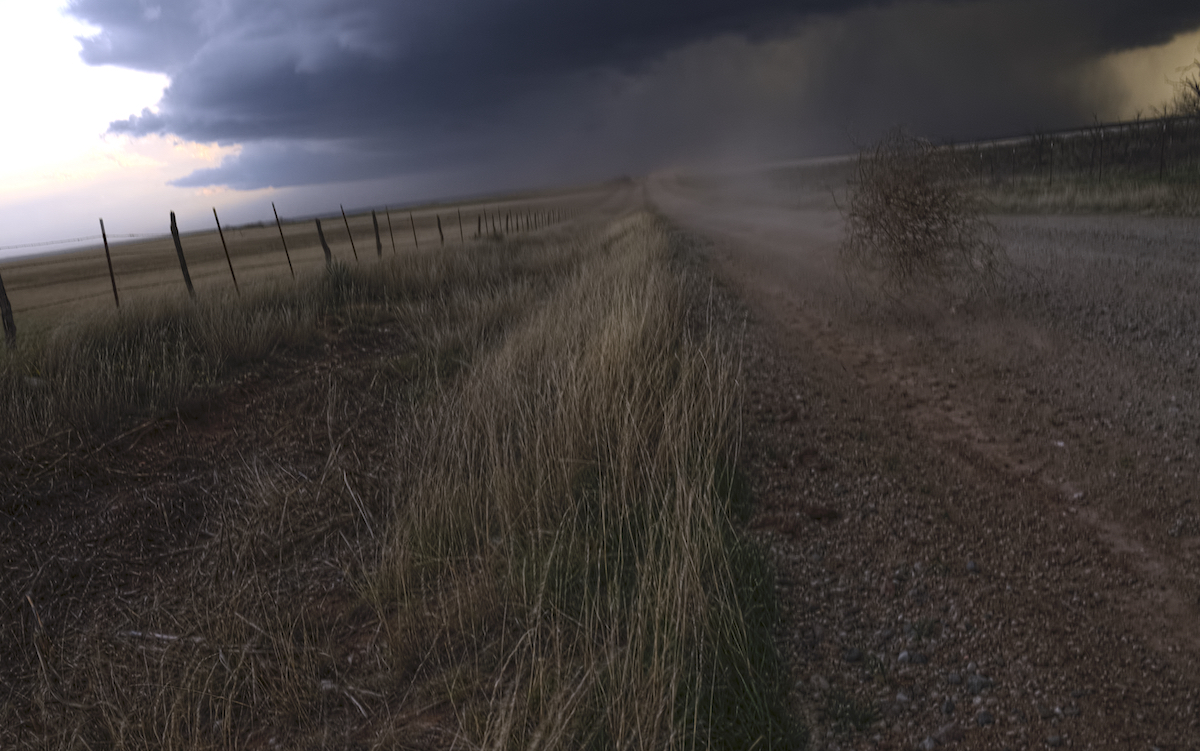 Being the tanks that they are, both the K-5 and the 16-50 survived just fine, but I'm glad I had the hood on as it took the brunt of the impact (it didn't survive).

Photographically, it can be a challenge to compose everything well in these situations. The storms are dynamic, with the details of the cloud shapes, precipitation curtains, and lighting often changing quickly. Time is usually short and you have to choose your spot along roads or turnoffs carefully and safely (always have an escape route!). So storm photographers are usually forced to work with what you have at these spots. I usually try to include some foreground element (a barn, windmill, etc.), but nothing like that was available here. Framing the road and wire fencing as leading lines directly into the storm from a low (and wide) perspective is a go-to technique in these situations, and I think it worked fairly well here, although I wish something interesting had been in the foreground in the right.

The exposure can be tricky in these situations, with light extinguished a lot under the towering mass of clouds and precipitation, but often shining brightly on the bottom edges of the upper cloud shields around the storms. The upper cloud shields often have interesting detail like they showed here, so I try not to blow these areas out, which usually results in an underexposure under the storm. But the exceptionally low shadow noise of the K-5 helps greatly with boosting the shadows in these situations.

One element that I was lucky to work with here was the yellow-orange backlighting from the setting sun behind the curtains of precipitation curling down into the bottom of the storm. It's often too grey and murky in that area from this perspective to bring out the structure of these storms.

Speaking of storm structure, storm chasers often crave the sculpted and detailed look to the rising cloud shield on the front edge of the storm, and that presented itself beautifully on this one. Here's the RAW image processed with default settings in PhotoNinja: 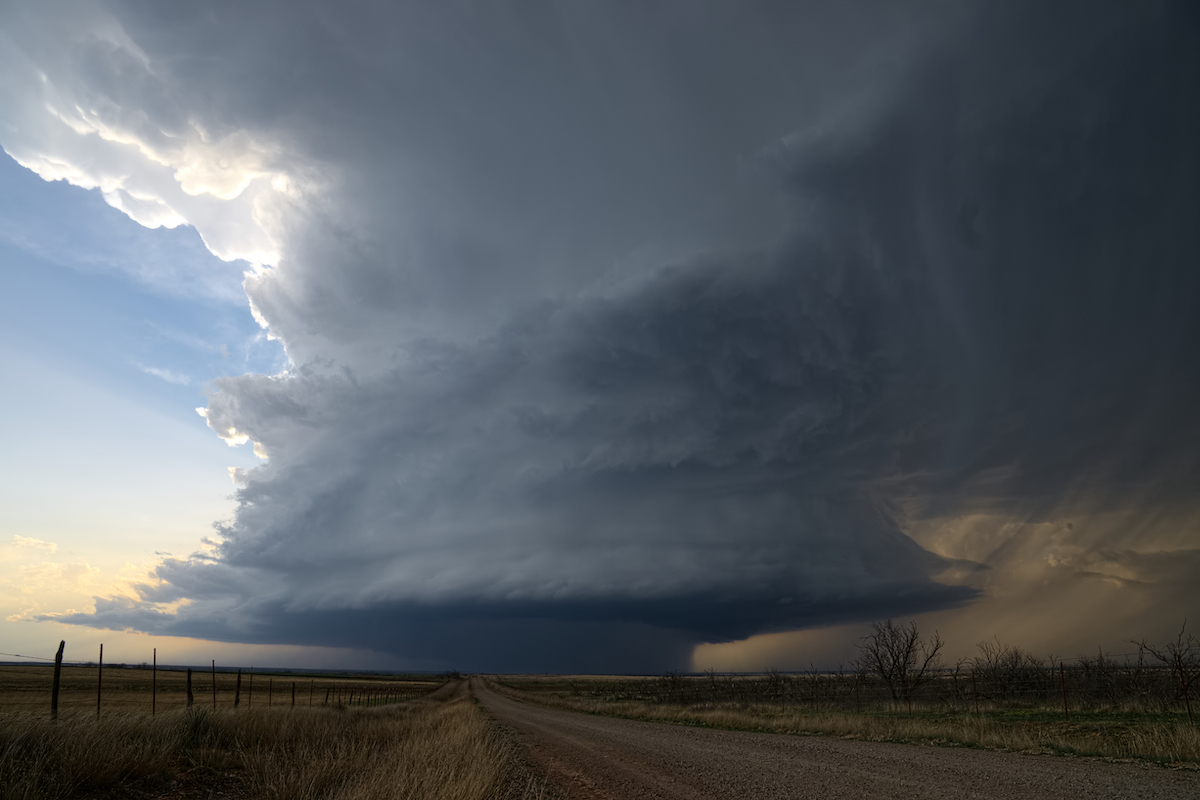 I probably over-protected the highlights and could have opened up the aperture more while still retaining the desired deep focus, but again, the cleanness of the K-5 shadows helped here.

I prefer a more natural look to storm/sky images, so I didn't do a lot of post-processing other than cleaning dust spots, brightening the shadows while keeping the highlight detail, and cooling the white balance. I find it's okay to boost saturation, clarity, and contrast a little as it can sometimes help the viewer get a better feel for what it was like to be there. I did a little of that here to bring the detail in the front cloud edges out a bit, but it can easily become something unrepresentative if it's pushed too far. I think I restrained myself enough here.

Shortly after these images were taken we had to bail south away from the heavy rain and hail lurking underneath. I was in my personal car and didn't have the luxury of the hail guards I get when I take work vehicles out in this! But I was happy with what I was able to capture in the ~30 minutes we had in that spot, and more importantly, I was happy I was able to experience this with my Dad.

Thanks again everyone for voting for me. Pentax cameras and lenses are great tools for these environments. I hope I can get my hands on the new 16-50 or 11-18 and maybe even the K-3 III one day for my storm work. Thanks to PF voters and admins for helping me get $50 closer!