The Making of "Orange!" 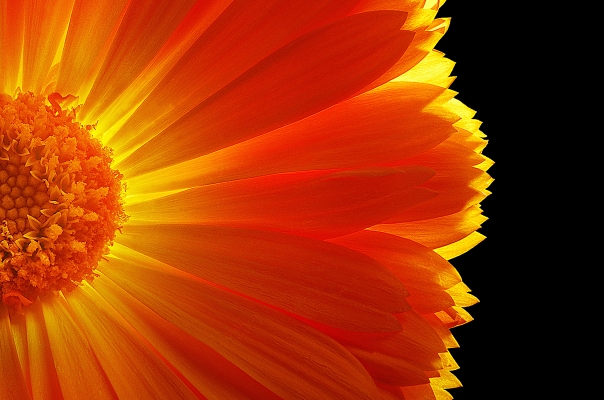 Thank you to everyone who nominated and voted for my photo. I am humbled, thrilled and stunned to be the winner, especially since there were so many amazing photographs in the June 2019 photo contest. I am truly honored to have been chosen from the excellent pool of submissions.

I have always had a love and fascination with macro and close-up photography, and I’m a big fan of contrast, color, dynamic lighting. One of the things I love about macro work is that most of the time, it’s not weather or time of day dependent. I took this photo on a gray rainy afternoon in February 2012. There was a vase of flowers on the dining table that I decided to pilfer for potential subject matter. This particular bright orange flower seemed to satisfy my need for color, so now I was left with contrast and dynamic lighting. To satisfy that itch, I used an LED flashlight to illuminate the flower from many different angles. I found that I really liked the effect of back lighting, as it caused the orange in the flower petals to glow and gave me reverse contrast. Whereas with front lighting, the recesses between the petals would be dark and the petal surfaces would be light, here I got bright recesses and darker petals. After many more shots than I needed, it was time to pick an image and process.

I used a Pentax K-5 with a Pentax-FA 100mm F2.8 Macro, mounted on a Manfrotto 055XPROB tripod with an Acratech Ultimate Ball Head. Side note: my wife bought the lens back in the early 1990’s for use on her PZ-1. I used it on my ME Super (yeah, I know… ME Super?) and absolutely fell in love with it. When it came time to purchase my first DSLR, the ability to continue to use the Pentax-FA 100mm F2.8 Macro (along with a lot of other Pentax glass we already owned) was the number one reason I chose the Pentax brand.

I use Photoshop as my primary post processing tool. At the time I took this photo, I was using Photoshop CS5. Second side note: It’s very odd to go back and look at the post process steps of a photo from many years ago. The first thought that comes to mind is “What the heck was I thinking, doing it that way?” Needless to say, we all move on from our beginnings. 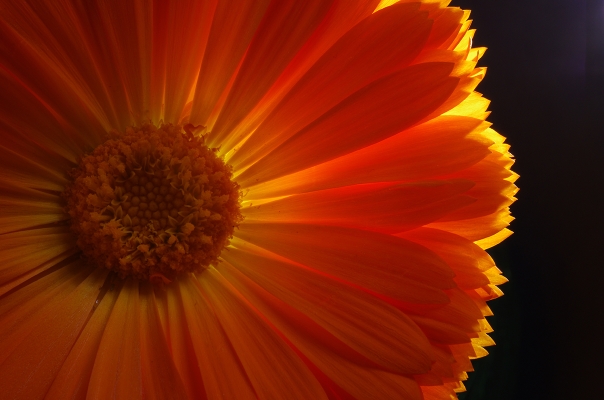 After opening the photo in Photoshop:

First, I made a duplicate layer and then used Spot Healing Brush tool and Clone Stamp tool to clean up all the miscellaneous pollen and dirt from the photo. This took the most time of all the adjustments I made to the photo.

Next, I added a Curves adjustment layer to darken the overall photo and to enhance the three-dimensional feel and glow of the backlit petals.

Then I added a second Brightness/Contrast adjustment layer, with a Black Layer Mask. I used a white brush to selectively brighten the center of the flower and other specific areas.

Lastly, I added a small amount of Unsharpen Mask.

I cropped the image after the fact, keeping the original 3:2 aspect ratio, to something I found more interesting and dynamic than my original framing.

I want to thank all the participants in this contest for sharing their amazing pictures. I was very inspired by all the photos. I especially want to thank the staff and moderators of Pentax Forums for creating and maintaining such an excellent resource for the rest of us. Pentax Forums is more than just a website, it is a true worldwide community of photographers and artists of all levels, and a constant source of inspiration to me.