The Making of "Pentax Table"

Winner of our February, 2016 "Tables and Chairs" photo contest

By Tapio Kekkonen in Photo Contests on Apr 8, 2016 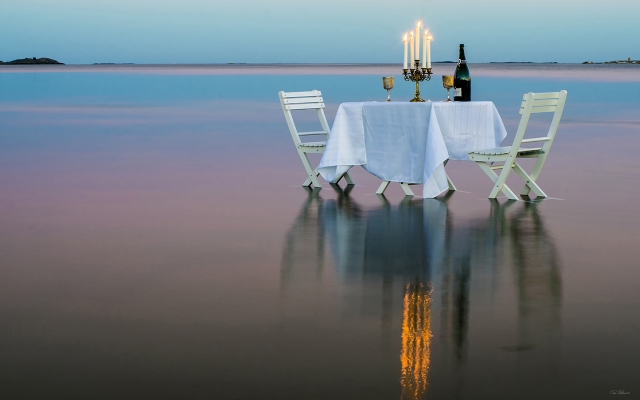 First of all, I'd like to thank all of you who voted in the PentaxForum's ”Table and Chairs” competition and special thanks to those voting me into the finals. There were so many great photo entries so it was an honour to get through to the final and this even with my first photo entry ever in any competition!

I've been taking photos almost all my life and it has been my main hobby since the 70s when I got my first Canon F1. There was a period of lazyness as I got tired of playing with the chemicals and developing, but a new interest emerged along with the digital cameras and Pentax. Now I'm eagerly waiting for my new K-1!

My photo was taken in Hanko, my home town in Southern Finland. The Hanko Peninsula, on which the city is located, is the southernmost tip of continental Finland. Hanko has a coastline of approx. 130 km of which 30 km are sandy beaches. This makes the light very special in Hanko!

I had been thinking of taking this kind of photo for many years and was waiting for the perfect conditions and that day came: the sea level was low, the weather was still warm late at night and the light was perfect. My choice of equipment was the Pentax K-3, Cullman 532 C tripod, Hänel remote trigger, but the question was: what lens? My choice was a Pentax-FA 50 mm F1.4 because I could use a circular polarized filter with it and I wanted to play with the reflecting light and I also wanted to be able to see through the water surface. I used a 3 second exposure time and manual settings so as to get smooth water and sky.

Post processing was done with LR 5 and Photoshop CS6. No special tricks was needed; only levels, white point, saturation, cropping, removing a dust spot. Here is the unprocessed RAW image for comparison (click to enlarge and browse): 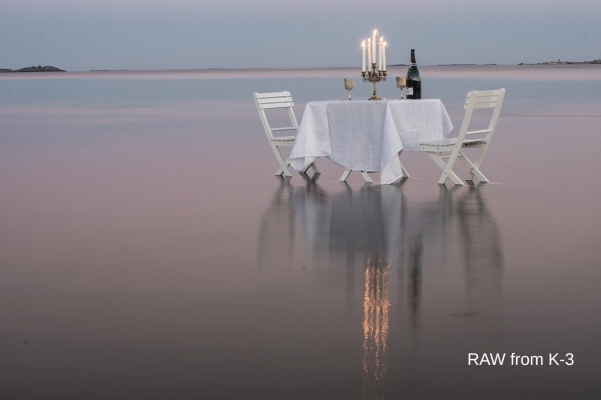 During the photo session I was standing in 20 cm deep seawater and to drop something into the water would have been a catastrophe. To be able to catch a fish swimming around the table would have been perfect! Just joking! I decided not to have any people in the photo thus making the viewer decide what has happened or what will happen at the setting.

While I was out there I played some with the polarizing filter. Here are a couple of the effects I achieved (click an image to enlarge and browse):

Thanks again for voting for my image,