The Making of "Pioneer Cabin"

Winner of our May, 2016 "Still Life" photo contest 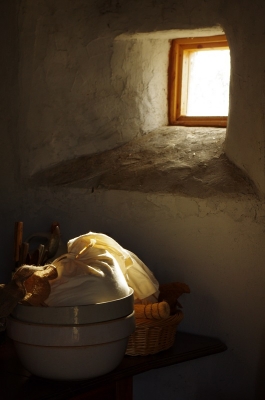 First of all, I want to thank everyone who nominated my photo and a special thanks to those who voted for it in the final round. Also, congratulations to the other winners of this contest - great photos!

"Pioneer Cabin" was taken at a weekend event in Nebraska. This 12' x 16' reproduction sod house was typical of a home a settler in Nebraska in the 1800's would have built to live in. This was a "living exhibit" and the home was furnished with a log framed bed, dresser, chairs, table, and other things that these early settlers would have used - candles, water pitcher, bowls, quilt, trunk, etc. There was even a small garden, laundry hanging on a rope clothes line, chopped firewood, and an outdoor fire for cooking. A young couple dressed in period clothing was on hand to make history come alive and to answer questions.

I had gone out to the event the previous afternoon but came back early the following morning because I wanted take pictures while the sun was shining through the only window in the cabin.

On the table were crock bowls filled with onions and potatoes, homemade bread, plates, eating and cooking utensils. The two stacked crock bowls in the picture contained a couple of fabric sacks which I assumed held flour and some other type of food. With permission, I rearranged the crock bowls so they would sit in direct sunlight, adjusted my camera settings, composed using the Rule Of Thirds and took my shot.

The camera and lens was a Pentax K-r and DA L 18 - 55 mm that I had bought from a Forum member only four months earlier so I was still learning to use it since it was my first dSLR. Settings were Aperture Priority, F/8.0, 400 ISO. Handheld. Straight from the camera, no post processing.

Thanks again for voting for my image.