The Making of "Rundle"

The winning image in our "Best of 2013" photo contest 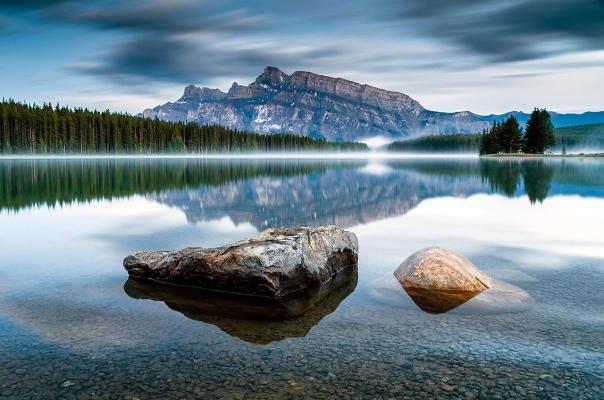 I'd been living in Banff for over one year, but very seldom had the chance to get out and about beyond easy biking range as I had no car. Every now and then we'd rent a car to go to Calgary or do a trip somewhere in the Rockies. One particular time we had picked up the car the night before and I had a chance to shoot out to Two Jack Lake.

This image was taken just after the sun had set behind me and the fog was quickly beginning to cover the lake further down the valley. I'd been here before, but this was the first time I'd spotted these rocks. Normally I wouldn't centre foreground objects like this, but they kind of resembled Mt Rundle's shape in the distance. The exposure time was just over 2 minutes, nicely bluring the clouds.

The RAW image was quite under exposed: 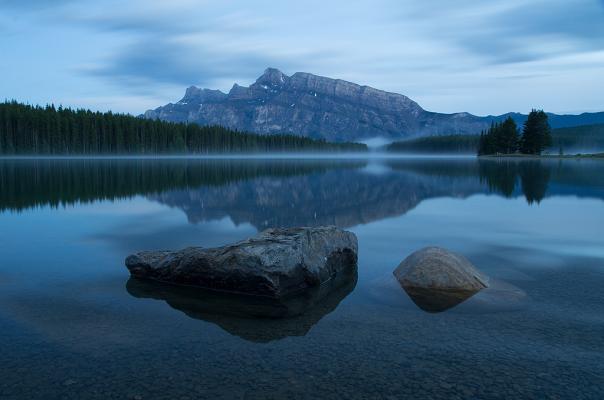 I raised the exposure and applied a graduated filter to the sky so it wasn't so washed out. Being a RAW image I needed to bump the saturation and vibrancy a little in Lightroom as well.

Although I have never tried focus stacking, I think this image would have benefited from it greatly, as the rocks are so close in the foreground. Next time attempting such a shot I will try this.