The Making of "Smokey Coat"

How the winning photo of the "Boats" contest was made 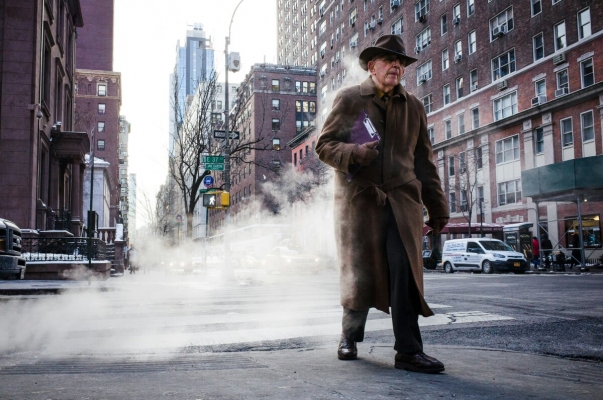 I am honored and thankful to see Smokey Coat Man on the Pentaxforums Homepage! Congratulations to the other finalists and thanks to everyone who participated and voted in the "People, Candid or Street" Contest 2018!

Candid Street Photography is not new to me. After moving from Germany to New York City (NYC) in summer 2015 I began photographing in public almost exclusively. I trained in various ICP photo workshops and got involved with the local street photo community NYC-SPC. During the years I made a couple of pleasing photos in the capital of Street Photography. One of them is Smokey Coat.

Here follows how the image was made:

My initial point of interest was the hot steam rising from a gully next to the crossing between East 37th Street and Madison Ave.

Working the scene:
I start shooting from a standing point of view. Photographing pedestrians walking into and out the steam. I glimpse at my shots to check if there is anything interesting. The steam output is not steady. Cars pass by and the steam moves with their driving directions. I stick around and wait for times without cars passing by. In the distance, I notice a uniformed looking, hat-wearing character walking towards the crossing. Distinctive hat-wearers get my street photo attention almost always. As he gets closer I get a better sense of his classy 50's outfit. He appears to be from another time.

I pre-visualize the scene and plan to shoot a frame right after he walks through the steam. I want to scale up the steam in comparison to the guy. To achieve this I need to crouch down and tilt my GR up a bit. In this position, the camera display becomes less visible

I half-press the shutter and prefocus on the curb. The man starts walking over E37th and I start photographing single frames. The first ones have the subject centered. As he moves I realize that the scene needs a stronger vanishing point and spin the camera slightly to the left.

The photo:
He passes through the steam and I capture him in mid-step. His head positioned in the upper right, following the classic rule of thirds framing. The steam is sticking to his neck and coat. It connects him with the rest of the cloud down below. The steam's triangle shape repeats in the building lines on the right. This makes the frame stick together more strongly.

Post Processing:
I am currently traveling and do not have access to the original image file. However, I tried to undo-edit the final photo to show how I remember the original to be: 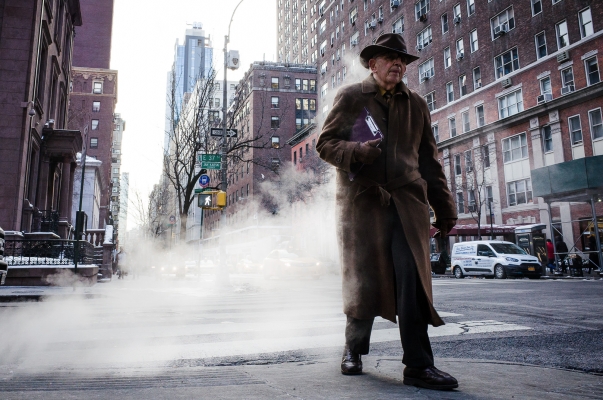 I recall the original file format to be RAW .DNG. The photo lacked saturation, contrast definition and the character appeared much less bright. Especially his face was darker because of the hat. Also, the vertical tilt of the building lines was more pronounced.

I did the post processing in Adobe Light Room.

Once again thanks for the nomination and prize!
Best,

PS: If anyone is interested I started a small Project with Street Photography Tips on Instagram, it is called @streetphototip. Feel free to visit and learn from inspirational quotes and tips about photography in public.