The Making of "Snowy Dunes and the Henry Mountains"

How the winning photo of the "Contrasting Colors" contest was made 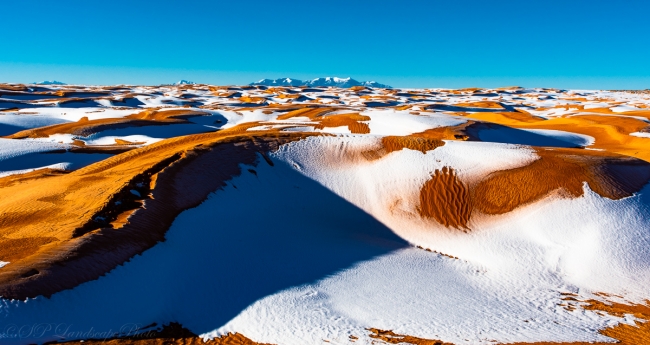 "Snowy Dunes and the Henry Mountains" - click image to enlarge

Many thanks to the Pentax Forums admins, and to all who voted for my image in the Contrasting Colors contest. I’m flattered to be chosen as the winner from so many excellent entries.

As far as the making of this image: this definitely qualifies as a case of right place, right time. But I’m mainly a landscape photographer, and maybe that statement holds true for quite a lot of landscape photography. One has to do a fair amount of planning to get the light right for the terrain. But there are definitely cases where it works out unexpectedly well, and this was one such.

This photo came near the end of what has become a regular trip to Moab in December. If you’re not thrilled with sharing your picture-taking or hiking experience with hundreds of others, December or January in the Moab area can be excellent. Several times I was the only one at popular spots for long periods of time, a situation that never occurs during spring, summer or fall. But it’s a little cold, so be prepared on that front.

The plan for the last day of my trip was to get up early in Moab, make the 2.5 hour drive to Horseshoe Canyon in Canyonlands National Park, hike to the Grand Gallery and back, then head home to Salt Lake. For those of you less familiar with this part of the world, Horseshoe Canyon is home to some of the best pictographs in all of the southwest US. But it’s not near anything. 30 miles down a dirt road off a highway that itself is pretty remote. This is some of the most remote country in the US outside of Alaska.

We got off to the planned early start, and 2 hours later, not too long after sunrise, we were rumbling along the dirt road towards Horseshoe Canyon. I had been there once before, several years ago, and vaguely remembered driving through this field of orange sand dunes mostly to the south of the road. What I wasn’t expecting was the effect that a snowfall several days earlier was going to have. When we came over the rise and saw this view, the effect was jaw dropping. It was still early enough in the morning that the light was warm and glowing, the sky was crystal clear and blue, and the dunes were an almost 50-50 mix of orange and white. I immediately pulled over, strongly feeling that this would be a good photo.

On to the technical stuff…I have both a Pentax K-1 and a KP. As we were going on a fairly long hike, I had the KP ready to go, and the K-1 was buried in the gear in the back. In hindsight, this was such a nice landscape, maybe it would have been worth digging the K-1 and the HD Pentax-D FA 15-30 out, but I was in a hurry to get as much of the warm light as I could, and the result I think is testimony to the image quality available with the KP and the HD Pentax-DA 16-85.

There was plenty of light, so settings were pretty easy. I shoot full Manual most of the time, so I set ISO 100 for maximum quality, F11 for good depth of field and then just adjusted shutter speed to get to the exposure I wanted, which for this shot was 1/200th second. One piece of advice I’ve frequently heard in landscape photography is ETTR (Expose to the Right), or in other words, purposely slightly overexpose. My actual process with the new Pentax cameras is the opposite of that. The dynamic range is so good, and in my experience it’s far easier in post to pull details up out of shadows than to recover blown highlights. So I almost always slightly underexpose, and that was also the case here.

After that, it was pretty much just a case of moving around to get an angle on the dunes that I was happy with, while still trying to capture some of the snow covered Henry Mountains in the far distance(by way of remoteness, the Henry’s were the last mountain range in the lower 48 to be mapped). I took 5-6 shots of the empty dunes, a few with my girlfriend on top of the nearest large one, then had her take a couple of me. In both cases we walked from outside of the frame around the back of the dune so that our footprints wouldn’t be visible. I also took a couple from the far side of the road with my 4Runner in the foreground. I had visions of sending them to Toyota marketing, as it seemed to me something they would like, but I haven’t followed up on that.

As far as post-processing goes, it was all done in Lightroom. I’m far from an expert on that front, being mostly self-taught. And I generally have tried to keep to a philosophy of relatively less PP. That was the case here; I really just tried to get the photo to what I remembered it looking like in person. Glowing warm orange sand, bright white snow, and an azure blue sky. Applied the built in lens profile, cropped a little to get rid of some extra sky and emphasize the dunes. I boosted Clarity, Dehaze, Vibrance and Saturation a little, but not too much. Exposure up a little and Contrast up a little. Moved the Shadow slider to 44 to get some detail in the shadows, and dropped Blue Luminance down to -51 to get back to what I remember being a bright deep blue sky. 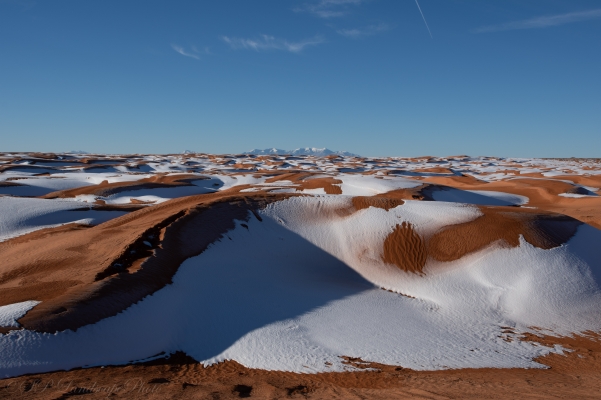 That’s basically about it. Again, I’m very grateful to all of you for thinking so positively of the results. And for reading to the end of this “Making of” story, which hopefully gave you not only some insight into the photo itself, but also this part of Utah, which is a little different than the usual popular spots. If you’ve got the time during a vacation to make the long drive/hike out to Horseshoe Canyon and the Grand Gallery, that also is well worth it.