The Making of "Station"

How the winning photo of the "Lights" contest was made

First of all I congratulate all December photo competition contestants. Job well done! 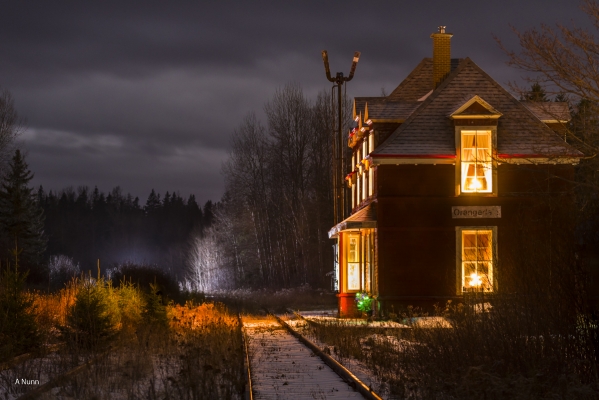 Thank you to all who have chosen this Photo, nominations and votes along with the many kind comments. The members of this forum are fantastic. I have learned many things since joining PentaxForums in 2016 and I am still learning.

My Introduction to Photography

I received my first introduction into photography while attending a 3 year Audio Visual program while attending High School. We where taught not just still photography but video and audio production as well,  this was back when super 8 film was over taken by Beta Max, not long after VHS. It took two students to carry that dam video equipment around.

I did, however, get to learn still photography with 35mm film and didn't have to pay for the film or development at the time. I must admit  I was more into the video production, though. I never owned a 35mm camera after high school,  other then borrowing equipment from family members.

How I Got into Digital

Years later when digital hit the market I purchased my very first 4MP Fuji Camera with a 10x zoom. I didn't have that camera for very long, since I left it on my tail gate one day and ended up backing over it!. A year later I purchased the same camera for half the price as the first time around.

My second digital camera was a Sony A300 DSLR with a few low end lenses which I played with for a few years. I enjoyed that camera; it was a big purchase for me at the time where camera equipment wasn't at the top of the priority list. I always had a passion for photography, but just couldn't afford the equipment. Especially out of high school I couldn't even afford the film let alone a camera and lenses, collage being priority. While out whale watching one day and snapping photos I somehow managed to get salt water inside the camera body.  After having it cleaned it was never the same, so this unit now kind of sat on the shelf for a few years.  Most of the digital era has been self taught and trust me I'm still learning , I do believe having an eye for photography as they say, can not be taught , you ether have it on you don't ,

My first Pentax Camera was a K-50. I went into my local camera shop to buy a Nikon after doing some research, but the salesmen sold me one the weather sealing of Pentax. I jumped on the idea after having ruined my Sony with water, so here  I am, now shooting with the K-3 II and K-1. I've since sold the K-50, but was a great little camera.

How the Image of the Station Was Created

The night I shot this photo there was no wind and a 3/4 moon which provided a nice back light for the clouds.  I had watched the forecast in advance; it promised snow, but that didn't happen until I returned home later that evening.

I used three speed lights, Pentax AF540, Metz 44 AF, and Yongnuo 660. If you want a bright flash at a cheap price I would recommend the Yongnuo. I find myself using this $100 flash more than the Pentax which I purchased solely for its HSS which doesn't empress me at all. I used the Aputure remote triggers which I really like since they work over a long distance. I had two of the flashes set up in tandem down around the bend of the tracks. This was preplanned, but there was suppose to be snow coming down to help deflect the light around for me to give the effect of an on-coming train (no train has crossed these tracks for about 6 years now). I set up a third flash directly across from the station to also help with the on-coming train effect, simulating the headlight of the train shinning  on the building as the train goes through the curve.

I photographed this building back in the Fall,  after having been contacted by the museum; that photo was shared on their Facebook page. I was happy to have made the contact with the museum in the Fall because already back then I decided that I wanted to return when the snow fell in order to shoot a Christmas theme. After exchanging several messages I convinced my contact to allow me access to the building. I was told that for many years the station had been decorated for the holidays, but that interest was lost over the past few years due to lack of funding and volunteers. So off my wife and I went with our own xmas lighting in a large tote from our own home.

History of the Orangedale Station

This station house is located in the small county community of Orangedale, Cape Breton, Nova Scotia, Canada. The Intercolonial Railway System (became CN Canadian National in 1922) was constructed in the 1880's and early 1890's. The Orangedale Station was built in 1886. 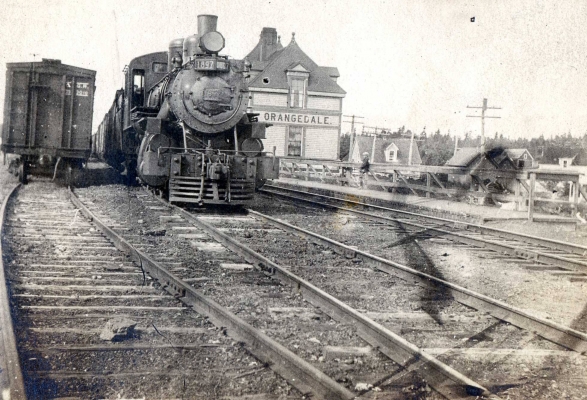 This station is now a museum and the last of its kind in fact, as the others on the line have been torn down. The Orangedale station was purchased by the local community and thus saved.

In its day this location served as the hub of Cape Breton Island. Many men and women passed through here on there way to Halifax to sail overseas in the two World Wars. Sadly, many didn't get to return. The station was in operation until January 1990. 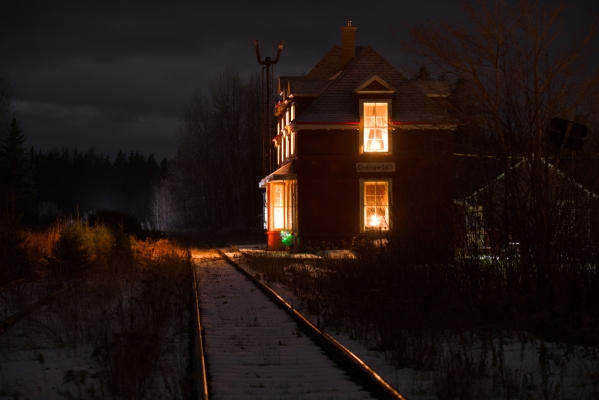 I use Lightroom 6cc, self taught. I chose Lightroom because it has many more online tutorials than other software on how to use this program, and, yes, its still work in progress, but I feel at this point that I'm getting a feel for it and have a system of sliders I work with and a set I don't use.

I always shoot in Raw and always underexpose my shots. I ether shoot in manual or, when shooting with my long lens, TAv, in which case I just set my exposure compensation to underexpose.

I've read a lot of blogs on the forum about using postprocessing,  many don't seem to like it. All I can say is that it is just another tool like a digital camera. Once you turn that digital camera on you are using software to enhance a photo! As I see it my using Lightroom is no different then using a digital camera, and you can't compare the process of shooting with 35mm to digital. I only wish digital had come out when I was in High School back in the 80's!

One last thing to share with you: I had this fantastic teacher at the time (he has since passed). I remember him telling the class that one day you will be able to see the person you are talking to on your phone and we all thought he was crazy. My point is that technology has changed a lot in my life time and I can hardly imagine what the future holds.