The Making of "Straight to the Point"

How the winning image in our August 2013 photo contest 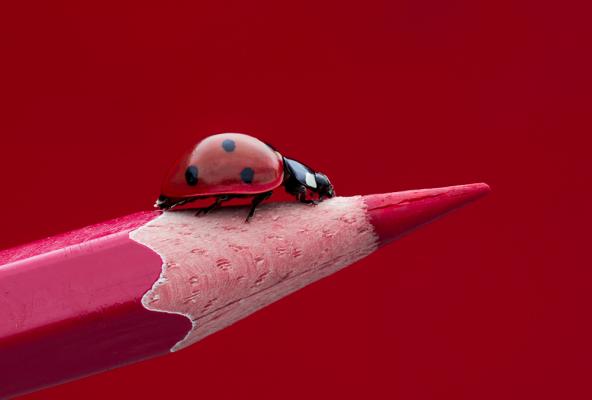 This picture started with the regular check of our kitchen windowsill, which is the insect equivalent of an elephant's graveyard, a veritable treasure trove of suicidal arthropods.  A  ladybird which was still alive, but upside down and moving its legs very slowly was too good an opportunity to pass up.

I went to fetch a sheet of paper to transfer the ladybird onto, and amongst the other scatterings on the table from the kids’ homework there just happened to be a red pencil next to the large, red English French dictionary.  So the photo idea really just presented itself to me.

I am a natural light photographer (which is a euphemism for a studio lighting numpty) and luckily the day was very gloomy,  so the conditions were ideal to cope with the tricky reflective surface of a beetle carapace.    I set up the pencil in the vice of a small woodworking table , propped the dictionary behind and set the ladybird in position - the tip end of the pencil was logical as the  rough surface gave some purchase.

The final image is a stack of two frames at F8 taken with different focal points and with a shutter speed of 1/50th and ISO 200.   Post processing was mainly a little cloning to remove the small specks of dust on the subject and to enrich the colours a bit.

The ladybird was then transferred to the flower bed and wished well.

These are the two original images (click to enlarge):

The Making of "European Bee-eaters"