How the winning photo of the "Portrait" contest was made 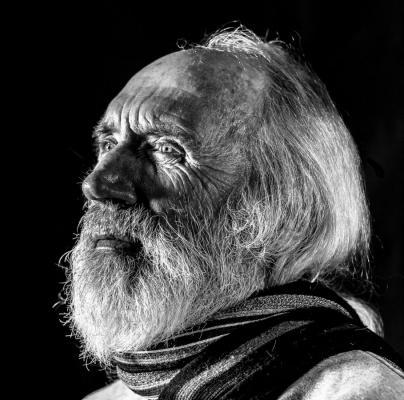 Many thanks to all the folks who voted for my photo “The Gaze” in the March 2021 “Portrait” Photo Contest – I saw that it was attracting interest during the shortlisting process and was thrilled to get into the last 15 but never thought that it would eventually win the competition.

As stated in the comments for “The Gaze” it was taken during one of Selsey Camera Club’s final few live club meetings in February 2020 before the pandemic forced us to close shop. Selsey Camera Club is a small but enthusiastic camera club based in a small town at the bottom end of a peninsula on the south coast of England near Chichester, the county town of West Sussex.

We hold a regular portraiture workshop every year – an event, organised by club member Bob Hoare who always finds an interesting but contrasting pair of models including attractive young ladies, a rugby football player (in playing kit), a fireman (also in kit – with accessories) and my personal favourite - older gentlemen (preferably with a full beard).

For this workshop Bob had persuaded one of his bowling club mates (he’s over 80) to come along as a model but I’m not sure he knew what he was expected to do and was rather embarrassed at first. After a while he relaxed and gave club member some memorable poses including the rather wistful expression captured in “The Gaze”.

Our portraiture workshop set up comprises two shooting areas each with a cloth backdrop (one black and one white) with a variety of floodlights, umbrella shades etc. – not a very sophisticated arrangement but sufficient for our needs.

My chosen kit for the evening was my Pentax K-3 and 2 prime lenses – smc PENTAX-F 50mm F1.7 and Cosina AF 100mm F3.5 Macro – both purchased used and cheaply but giving pretty good results. The 50mm was used to capture full body photos and the 100mm for head shots. Both lenses can produce very sharp images with good contrast and both gave me the portraits I was seeking especially with my preferred black backdrop.

On reviewing the shots from the workshop, I much preferred those taken of the bearded gentleman rather than the pretty blond model so set about to find the best ones to work on. In most cases the decision to convert to monochrome was easy to make since in Lightroom 6.14 (the last non-subscription version) I could increase contrast, clarity and sharpness and adjust the colour sliders in the black and white mix to get the skin tones and beard shading I was seeking. On “The Gaze” I also used the graduated filter to introduce more light to the gentleman’s hair and face, cloned-out some of the more unruly hairs from his beard and totally blacked out the background. A crop to give an approximate square format was the final adjustment. 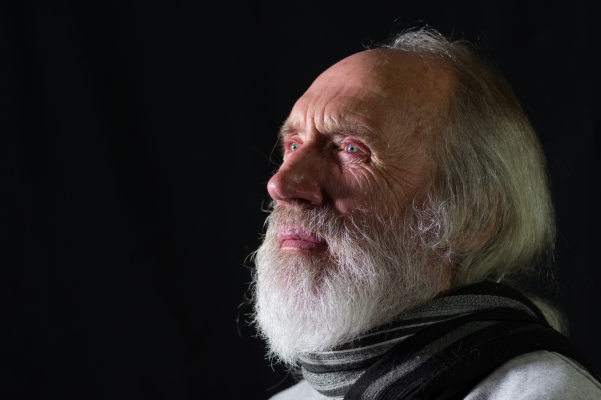 Thank you again for your votes – I am sure this will encourage me to be more active with the monthly competitions – I have already sent in an entry for the “Panorama” photo contest.