The Making of "Timeless"

How the winning photo of the "Night Sky" contest was made 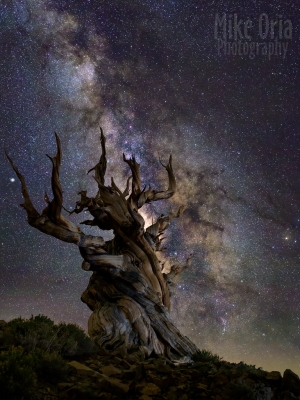 Thanks so much for your nominations and votes for my image, “Timeless”.

I made the 7-hour drive from the San Francisco bay area over the eastern Sierras and south to the legendary White Mountains, above Big Pine, CA. Meeting my good friend Miguel at Schulman Grove (we drove separately due to the pandemic), we quickly hiked up into the Ancient Bristlecone Pine Forest after dark. Selecting one of the more popular trees on the trail, I brought out my Pentax 645Z and DFA 35mm F3.5 and framed up a suitable composition on the hillside. I prefer this slightly longer focal length for wide field astro shots, because it brings the starfield closer and really helps fill the frame with a foreground subject. There is also less wide-angle distortion to mitigate when stacking multiple successive exposures.

It was an exceptionally clear night and the milky way was rising rapidly in the southeast. There was enough time for me to grab a series of long exposures, light painting the tree from the side, using my small LED panel attached to a monopod. In the absence of any ambient light whatsoever, this was a simple matter of using BULB mode and opening the shutter, creeping carefully in the dark beside the tree, then firing a brief beam of light, then walking back to close the shutter. Exposure time was not important. Knowing I would blend in some combination of light painting exposures in the end, I randomly shot several frames to sort out later (click image to enlarge). 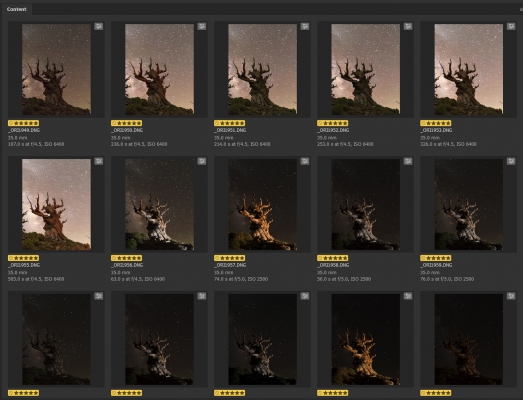 When the milky way was in position, I switched to ISO 8000 and shot a series of 10 sec exposures, leaving the LED panel on and very dim to help later with the masking of the tree. 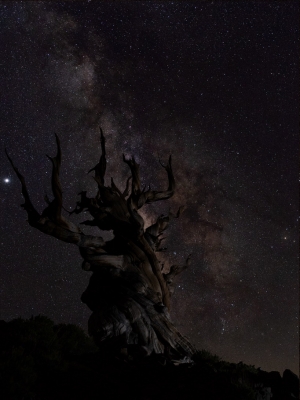 If you are familiar with stacking techniques, the idea is to combine several high ISO exposures using software to “average out” the noise, hot pixels, air traffic, etc. Presently, I much prefer Sequator, a free software tool that is easy to use, and will automatically align the star frames while keeping stationary objects fixed in the frame. This screen shot shows how I painted the sky green to denote the sky. The unpainted area will remain unshifted by the software. 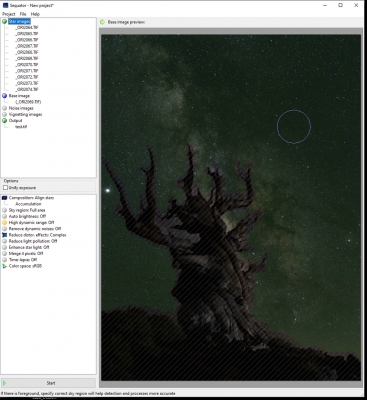 Finally, the stacked image was imported to Photoshop where I increased the brightness using Levels, and imported 3 of the light-painted frames, carefully blending them using the “lighten” blend mode. This allows only the lighter pixels to show in the layer stack. 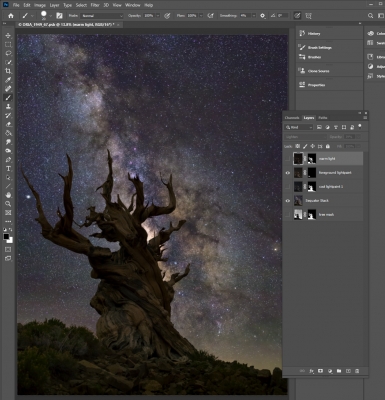 Lastly, a few general adjustments such as sharpening and contrast, and the image was ready to share.