The Making of "Torre del Mangia"

How the winning photo of the "Architecture" contest was made 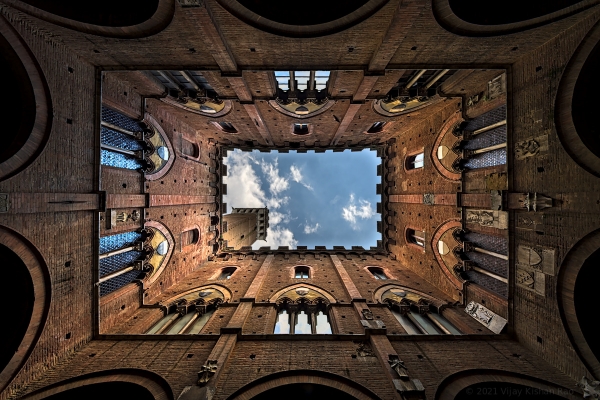 Pigeons! One of the frequent loathed and loved birds around. Some are celebrated as a symbol of love, freedom and free spirit others chased around by giggling toddlers, considered pests and a nuisance. Come to think of it, they are much like photographers, no, I’m not referring to the duck billed platypus pouting in front of all the iconic places aiming for hearts and thumbs, I’m pointing at the old fobs (like yours truly) who refuse the leave their tripod and carry the “equipment” much to the chagrin of their travelling companions. One of these feral flying rats (yours truly again) happened to land in Sienna - Italy many a moons ago expecting new experiences, good food and of course good stuff to photograph.

After many years of negotiation, my partner and I have come to an agreement, I don’t disturb her R&R and she doesn’t mind me sneaking out early in the morning provided I execute it in absolute silence. Long story short, on this particular day she accompanied me to the magnificent ancient town centre of Sienna in the late morning, as I was too bummed to wake up early; I’m usually an early bird, but today, I did not catch the proverbial worm. As we ambled through the ancient town to reach the piazza our eyes were greeted by old architecture piled on each other over centuries. 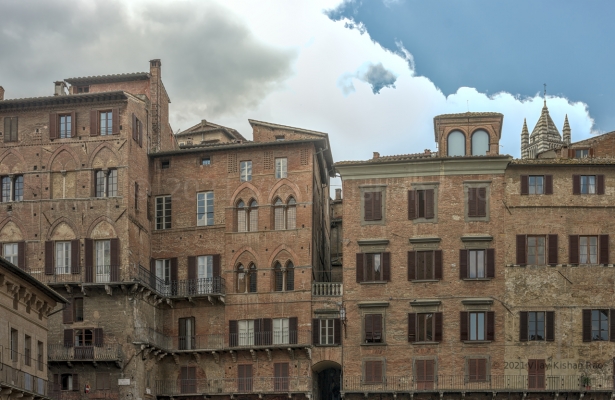 My jaw hit the ancient tiled floor as we entered the piazza del campo; it went out for a short walk on its own. As I gawked at the magnificent tower almost numb in awe,  time slowed down, pupils opened as wide as the FA limited lens and I felt a nudge on the back of my head. My companion helpfully had ferreted out the rampaging appendage and fixed it back. Additionally, she kindly reminded me that, not only is it rude to walk with my mouth agape, I might unwittingly ingest some insects depriving the local fauna of their ration. 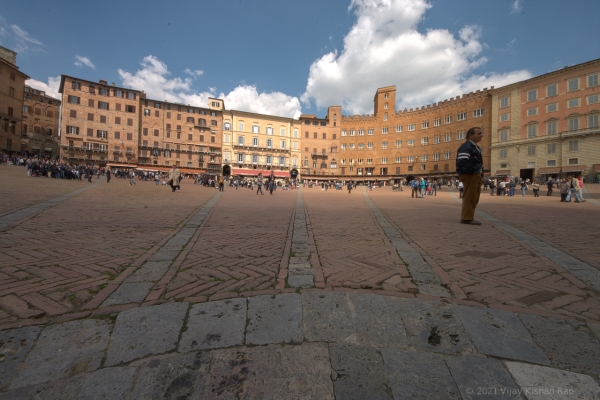 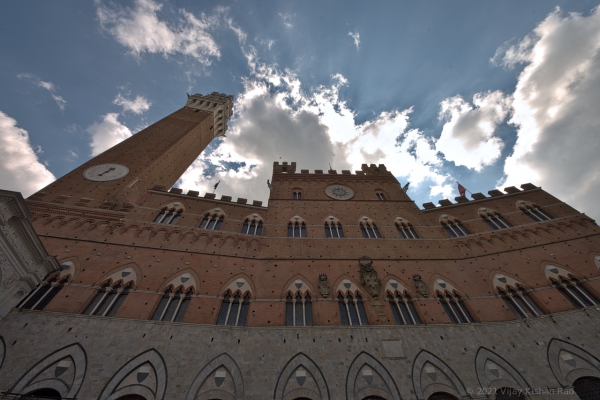 Del Campo from the outside

Here I was, in the middle of the Palazzo Pubblico and did my usual pigeon manoeuvre (nodding side-to-side while wearing polarised sunglasses to check how the scene/subject when subject to different degrees of polarisation). No amount of bobbing my head yielded results, just curious looks from the now growing number of tourists. That is when I put the Sigma 8-16mm ultra-wide on the Pentax K20D, and voilà, I found something.

The viewfinder showed me what seemed to have been buzzing in my head; the question however was, how do I accomplish it? I tried lying flat with my back to the ground and wriggled myself into the centre of the palazzo. I was eminently aware that a man in my age and my skin tone (70% dark chocolate) wriggling on the ground trying to emulate an elite break-dancer doing a “worm”, would elicit shock at best and at worst, trigger alarm bells in the cockles of the onlookers, usually culminating in the anti-terrorist squad rounding me up; I did it nonetheless! My thought at that time was, it would be worth the inconvenience and possible interrogation (how naïve! nothing is worth a free but involuntarily colonoscopy, IMHO of course). Anyhow, that exercise in inching on the ground was not as productive as I thought it would be, as the wide angle was not wide enough by a wee bit. The only alternative was to lay the camera directly on the ground with the lens facing up at its widest angle (8mm on a crop sensor) and aligning the camera body to parallel to the side of the Palazzo. Now the second problem found its way out of the woodworks – The blazing Sun. By the time my break-dance routine was over the sun had pleasantly sailed from the horizon to somewhere where it bothered me most (photographically), as it was casting an ungainly light/shadow that ruined the image I had in mind. 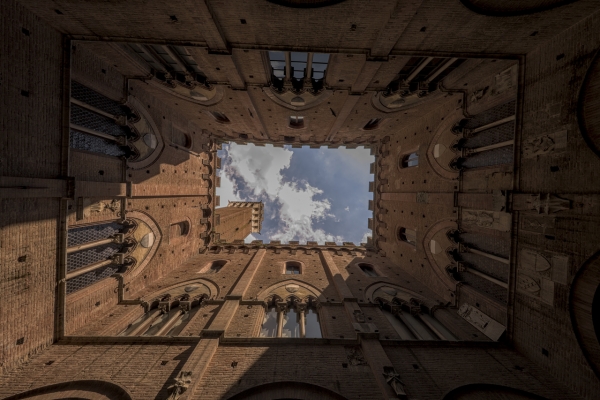 I needed some clouds to create a bit of soft lighting, as the pictures that I clicked in direct sunlight turned out to be something that would take a celebrity’s photoshop-team a month to correct. The third challenge ambled in from the doorway – tourists! Gah! Imagine the look on their sun-burnt faces when they saw a bulbous looking equipment on the ground and a weird looking old hog activating the trigger and scuttling away to the corner – precious. Thankfully no alarm bells went off.

The universe seemed to bestow its grace on me for just a few seconds when a confluence of events collided in my favour. The tourists seemed to dissipate; the clouds seemed to coagulate and suddenly the light was perfect. Realising that this could be my only chance, I pressed the remote trigger. I heard my dear K20D fire off 5 shots in 2Ev spaces and come to rest. With hopeful thoughts in my mind, I went and picked up the camera and ever so gingerly pressed the preview button. Pigeons! The frame was mighty misaligned; ultra-wides are finicky as we know, so this was the other challenge that I had known, but did not realize until the moment. A re-do of the shot was in order! Back to middle square. This time I lay on the floor with my back on the ground, aligned the camera and executed a near perfect worm from under it while craning the camera with the left hand. I imagined that If I place it as-is on the floor, I might get a slightly better alignment. It did! Not perfect, but waiting endlessly for another go, did not bring the rare confluence back, despite tempting the gods with an offering of a rouge feral pigeon. I consoled myself that at least I had something to work with, as my consort dragged me by the collar, back to the rented apartment for the day.

Back home in Germany, my other favourite bird powered machine was waiting in the wing. A Linux OS running on a CPU who’s name could easily be one of world wresting team’s moniker - THREADRIPPER. Darktable was/is my weapon of choice. Here are images that I started with: 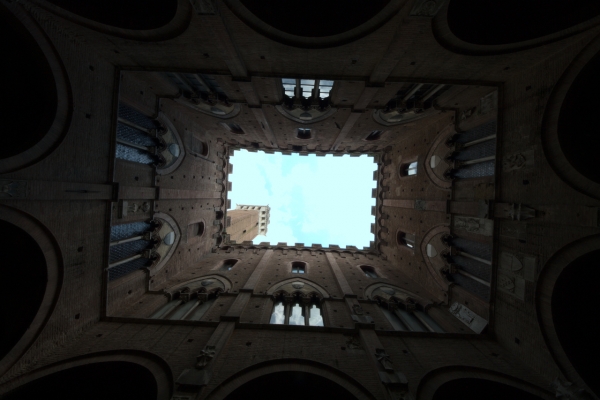 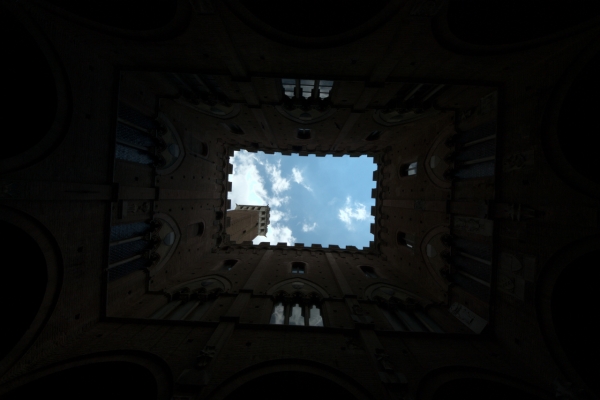 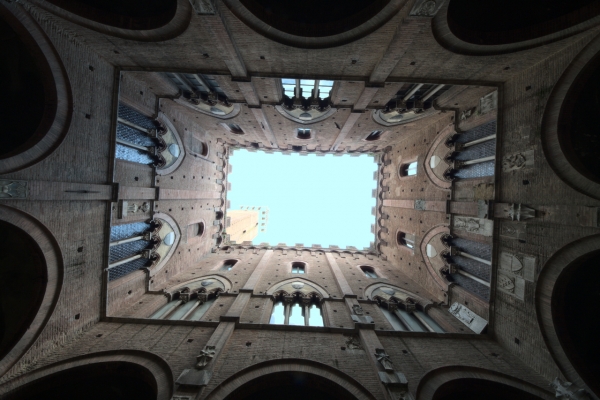 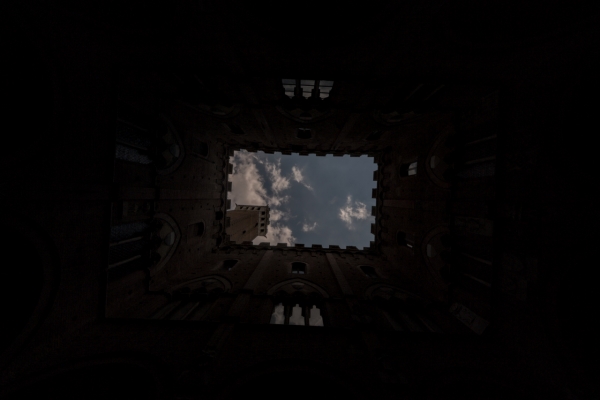 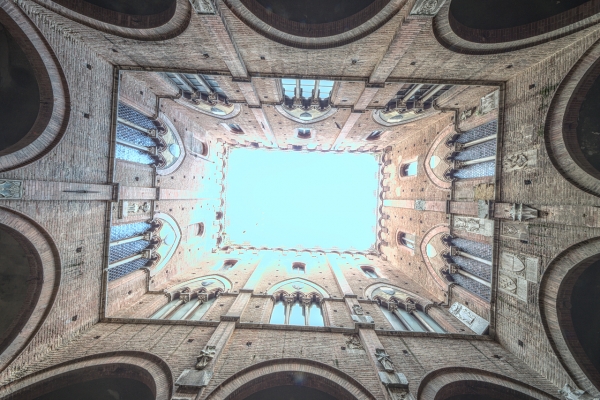 The post processing was rather straightforward:
-        exposure merge which created a HDR dng
-        automatic lens correction
-        de-noise, de-fringe, remove chromatic aberration
-        tone mapping (to ensure that it looked the way I saw) 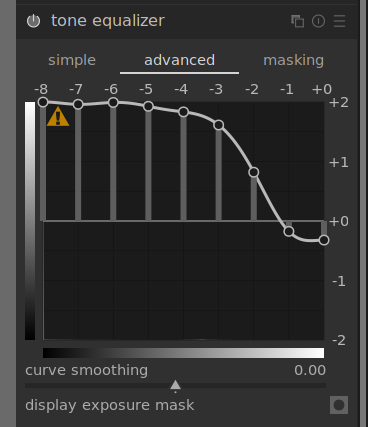 I thank this community for giving me an opportunity to learn and contribute. I do hope to continue to do so going forward – thank you. No penguins nor pigeons were harmed during this endeavour and apologies to the ardent ornithologists among us for opening this can of worms.