The Making of "Watching the Sunset"

By miguelfenoglio in Photo Contests on Mar 20, 2016

As most of my pictures are film it is hard for me to participate in PentaxForums contests. Film requires me to think, shoot and develop, which I can’t do in a single month (mainly as I don’t shoot enough to develop every month). When I saw the theme was composite and that it could be about anything I thought that was my chance, as I could use images I already had. I had never done composites and I had never participated in a PentaxForums contest before, so I thought it would be a good start. I never thought I would win, or even be one of the top choices. I mainly entered to see if anyone would like my picture. 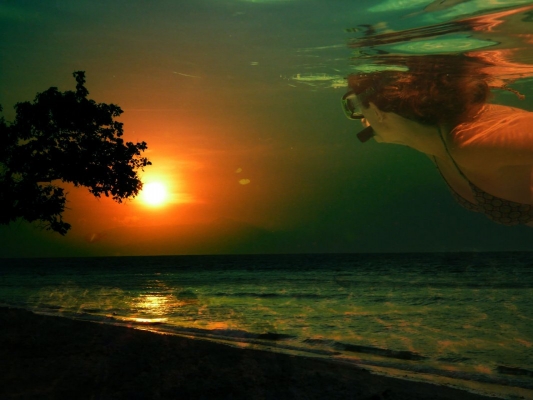 The composite uses 2 pictures. Both were taken in Gili Trawangan island, Indonesia. I wasn't initially thrilled about having nothing else to do than go to the beach, but I was dead wrong. Snorkling was great and the underwater camera we borrowed from a friend was a lot of fun. And I got a chance to take some interesting pictures and now it has even earned me the honor of winning this contest, so it was great!

The “main” picture is the sunset. Although both images are used in full, the sunset is stronger and it sets the background. Then, there is the underwater image, which has my wife as the subject.

A bit of detail regarding each image:

The sunset was taken using a Pentax K1000 with a Pentax-M SMC 28mm F2.8 prime lens. I like Pentax mechanical cameras and own a few now, but the K1000 was the first (as it was what my mother used to have and I could never forget that light meter) and it is the one that sees more action. At the time the picture was taken it was the only film Pentax I had and I took it on all my trips (leaving the DSLR at home, believe it or not).

The island is very small and you can walk all the way around it in a couple of hours. The sun set on the opposite side from where we were staying and you could see one of Bali's volcanoes from that point. The colors came out stronger than they really were and the image is a bit underexposed, but from my view that added a bit more atmosphere to the picture.

That’s the thing about film, you can control to a certain extent, but you cannot correct on the go as with digital and there is no Auto WB. For me that is one of the things I like the most about film as it requires you to think more, shoot less and nearly avoid post-processing. It forces you to stop struggling to get the perfect shot and enjoy getting good more natural shots instead. While I have lost a lot of good shots (couldn’t get the metering on time, manual focus took too long, wrong film in the camera, problems while developing the film…) there are a few that come out great, even better than you could have thought possible and much more natural than with a DSLR, where you usually repeat the shot until it is technically perfect, but perhaps lacks spontaneity.

The composition was really dominated by the 3 elements that I wanted: the sun (of course), the tree (I like and tend to include backlit silhouettes in my landscapes) and the volcano (which is not too noticeable at first glance). Once I found the spot I liked I took 2 shots (again, the pros and cons of film, you can’t take 30 pictures until you get the perfect one but the bright side is that you only need to choose between 2 or 3 when you develop). For sunsets I meter the frame right over the sun and that gives me nice results. In this case, since I wanted the tree as a silhouette I went down 2 steps just in case for the second shot. This is the one I used for the composite: ISO 100 film, F5.6, 1/500s. 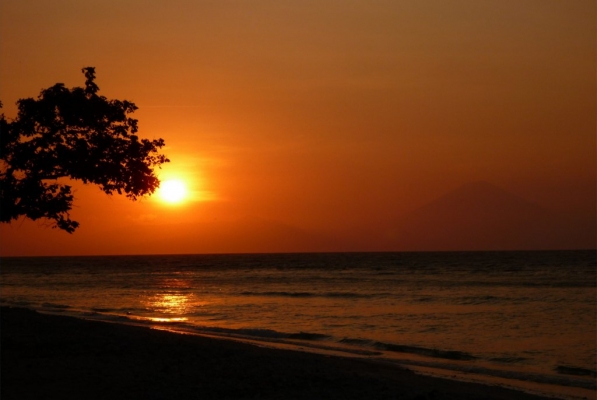 The underwater images were a lot of fun. To be honest this was really more of a point and shoot approach as I mainly took them for the fun of it and wasn’t trying to get any great underwater shots with a regular underwater compact consumer camera (which if I recall correctly was the W60). That said, some of them really do look great and are very nice to look at.

The picture I used in the composite was not the one I was actually looking for initially. But this one worked much better than my original idea and the end result had that surreal touch which from my view is the strongest thing about my submission. Also, while the incidence angle of the light is incorrect as it falls on the subjects back when it should be on the face, the lighting worked quite well in my opinion.

The most important thing though: the subject is looking at the sun which is a great, but completely coincidental. Both images just fitted together like that. If you look closely at the resulting composite you will notice that this image covers the entire background (you can see some small fish and the light waves from the bottom of the sea overlaying the sunset image in the composite). 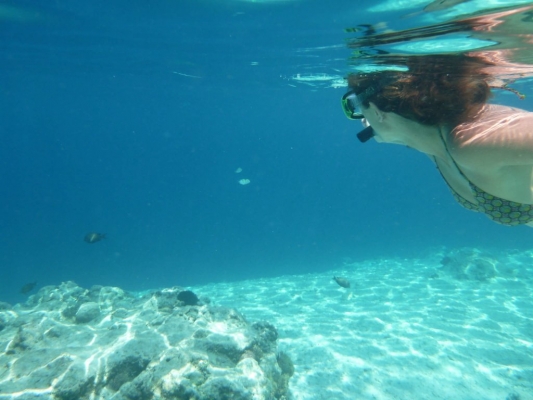 As I said, this was my first composite. I actually had to raise a question in the contest’s thread to make sure I understood the difference between a composite and a collage. I have to admit I’m still a bit confused, but I decided my composite would be as close a possible to a multiple exposure shot. That’s what I aimed for so I had to find two images that worked well together without much post-production. For that I used GIMP. I’m not too familiar with GIMP (I come from a long background of PS but decided to go open source) so it took me a while but there is really very little that I did to the images. Again, I was lucky. All I did was: 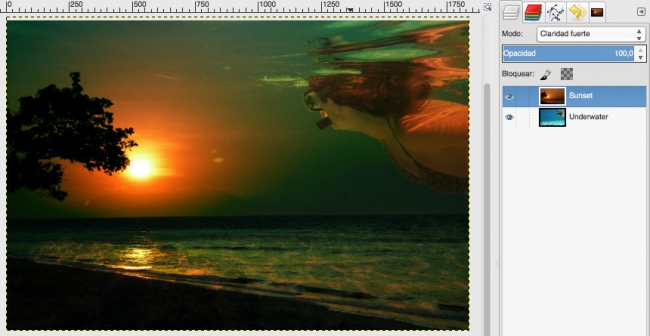 So, a bit of confidence that the film shot would turn out well, a bit of fun from the underwater shots and a bit of luck, this all gave me the first place on this contest. It’s a great honor and I’m very happy to see that forum members liked my submission. Thank you to all of you that gave me your vote. The prize, a K-50, will be donated to a local photography club I’m a member of (http://www.golferichs.org/catala-roca/), so they can use it in the workshops they offer.

Again, thank you PentaxForums, Ole, Adam and everyone who voted. I hope you enjoyed this post.