The Making of "Where Do We Go?"

How the winning photo of the "People" contest was made 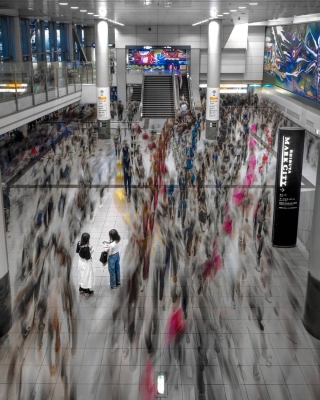 I was initially trying to do a time-lapse which turned out to be a bad idea for this location. It has too few people walking in the area. But the two ladies stopped at this one spot and had a chat for a while, so I thought it might be better to do a composite photo of people movement around them. The image is my first successful manually created long exposure composite photo. It took a lot of trial and error in both shooting and post processing. Below I will show the successful part of the work and some tips for anyone interested in trying something similar.

I used ISO100, F16 and continuous shooting of 1.3” for each image. Interval shooting won’t work here because the gap between each frame will be too wide. Therefore I let the camera shoot one image after another until it died.

The image was composed based on the rule of thirds. The two ladies were just a strike of luck. They stopped at almost the perfect place on the lower part of the floor. I cropped the lower part out to fit the 4:5 ratio for my Instagram post.

I selected 18 frames and used the frame with least movement of the 2 ladies as the main image. 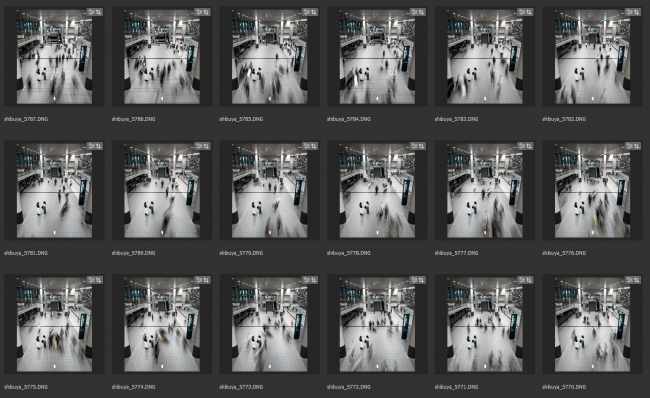 Step 1. I began with post processing the selected main image in CameraRaw. I just did the overall lens, color and light correction here. I have learned not to do the digital dodge and burn right now because it won’t always come up right when I load the setting to the rest of the images in then next step.

Step 2. Next I applied the same settings to the remaining 17 images. I opened them all in CameraRaw. Once they were opened in CameraRaw I made sure that all 17 thumbnails were selected and hit "Load setting", then selected and loaded the file saved from step 1 above.

Step 3. Next, I opened all 18 images into Photoshop’s layers. I kept the main image from step 1 at the base layer (first layer from bottom). I placed  the other 17 layers in a folder and applied a mask to the folder so that I could mask out the area with the 2 ladies so there will be minimum blue on that area. 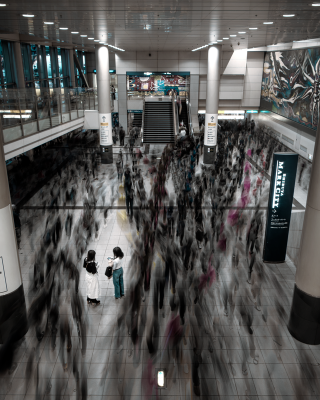 Step 4. I converted all 18 layers to a single "Smart Object". Then applied "CameraRaw Filter" to the newly create Smart Object so that I could apply a variety of dodge and burn here. In the CameraRaw window I used the brush tool to paint the trails of people parts and then bring the "Shadow" up to +55. The colors in the area of movements will show up at this point. Next I adjusted lighting and color here and there and re-cropped a bit to get the final image. 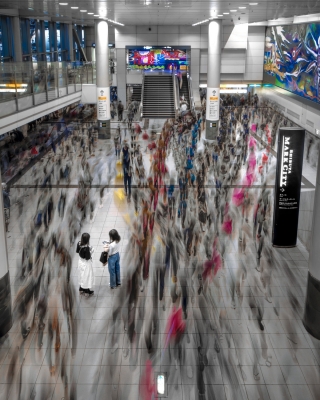 It seems simple when I look back now, but I tried and failed many times in finding the best shutter speed and make the color and details in the movement show up. At first I thought it would be as simple as doing light trails from street cars but I was wrong. Maybe the best and simplest way to do a trail of people movement is to not do it in a very large area. It is easier to zoom in closer to a crowded area with a lot of people movement, and just do a single long exposure shot. Or let the camera do the in-camera composite photo. But if you want the maximum control (and headache) to show not only the movement but the large scale of the place you are in, taking a lot of photos and doing it manually is a fun way to go. I still try to find a better and faster way to manually achieve this kind of photo. For now, this is the best I can come up with and I hope you find it helpful