The Making of "Work, work, work" 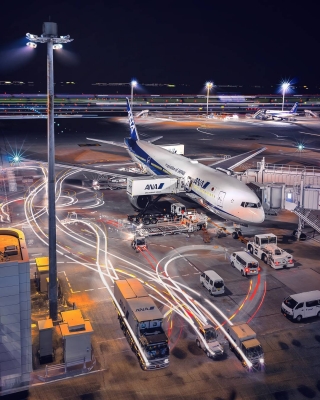 Thank you for voting for my photo in the "Movement at Night" photo contest! Here is how the photo was made:

Background Story:
I got the idea from a time-lapse video I did at the same airport. It was interesting to watch the trailer operators drive their machines around in the time-lapse video. You can check it out here. That video is composed of about 1,000 shots. And I wanted to do something like this for my airport light trail photo too (visible cars and their light trials in the same image). To do that, I had to look for locations in front of me where the cars would have to come to a stop. During the capture of the time-lapse I noticed that cars and trailers will have to make a stop at the bottom part of the scene before they exit the area again. As seen from the earlier link, that is just perfect for my light-trails shooting style. 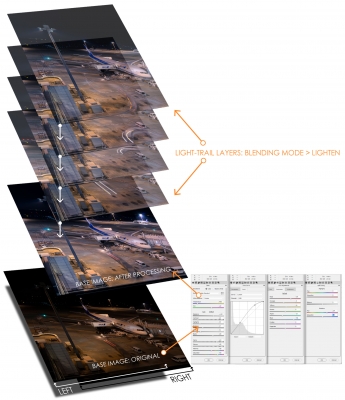 What to improve:
I like the action but I don't like the color. It is too much yellow and I try my best to fix it in the CameraRaw setting. But I still don't like it. If I did it again, I would start shooting from blue hour. And maybe use an ND filter to reduce incoming light so that I can have a longer shutter speed = less work in Photoshop. Any suggestion for color in post process will be very welcome.

Other note:
If you are at Haneda Airport and want to try this: Before you check in, go to the left side of the domestic terminal's top floor. It seems to be the best location to shoot with a tripod and wide-angle lens. They have a free shuttle bus running between the two buildings. I prefer the sunset hour at the international terminal, though.

Thanks so much for voting for my image!