The results are in!

Between February 26th and March 10th, we conducted a detailed survey via e-mail to gauge the current and future interests of Pentax K-mount DSLR users.  Given the broad scope of the survey, we never would have expected to receive over 1,600 responses!

Thanks to you, we are now ready to share the results of the survey, which was intended for people who user Pentax as their primary camera brand.

What are your main photographic genres? 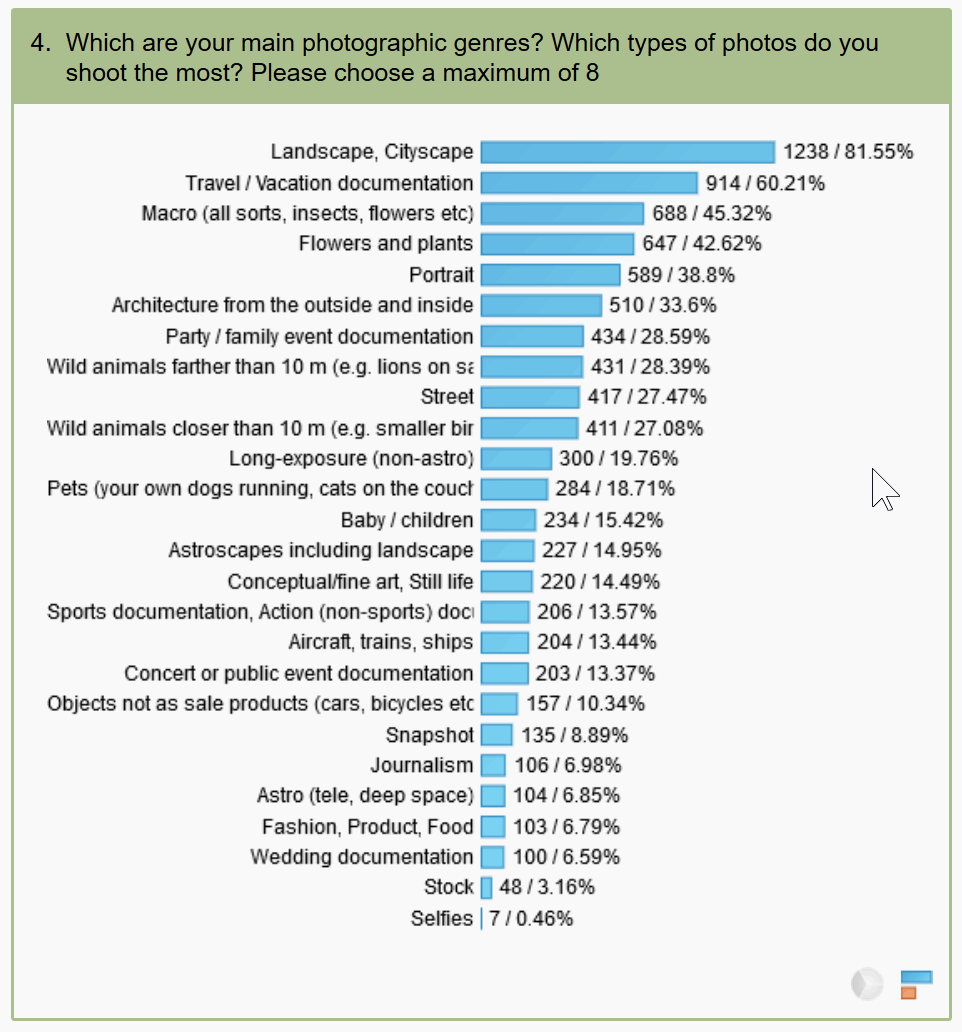 What we can see here is that most Pentaxians love both landscape and travel shooting. A little surprise here is the macro part which gains third place.

Do you shoot photos for money? 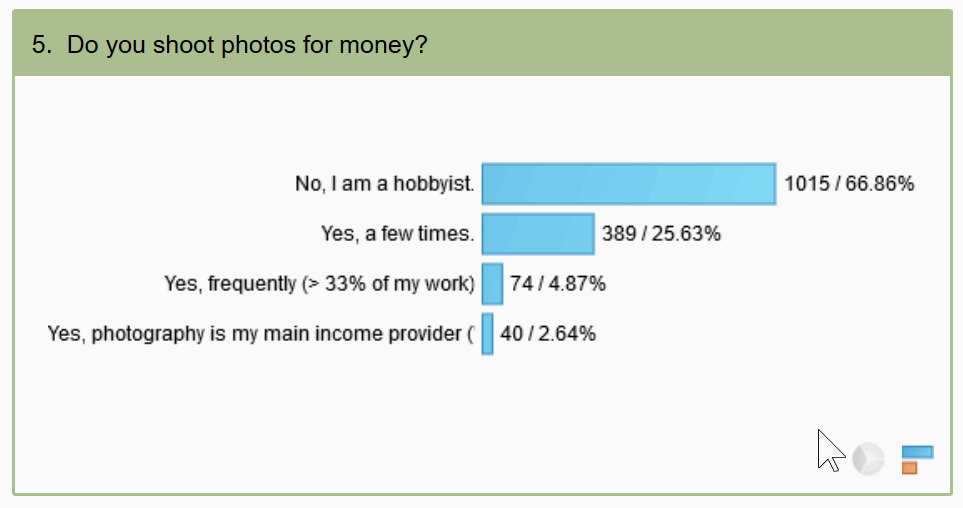 Not many suprises here. It is mainly a hobbyist activity with very little pros (<3%) included. Between those two groups there are quite some who every now and then sell a photo. 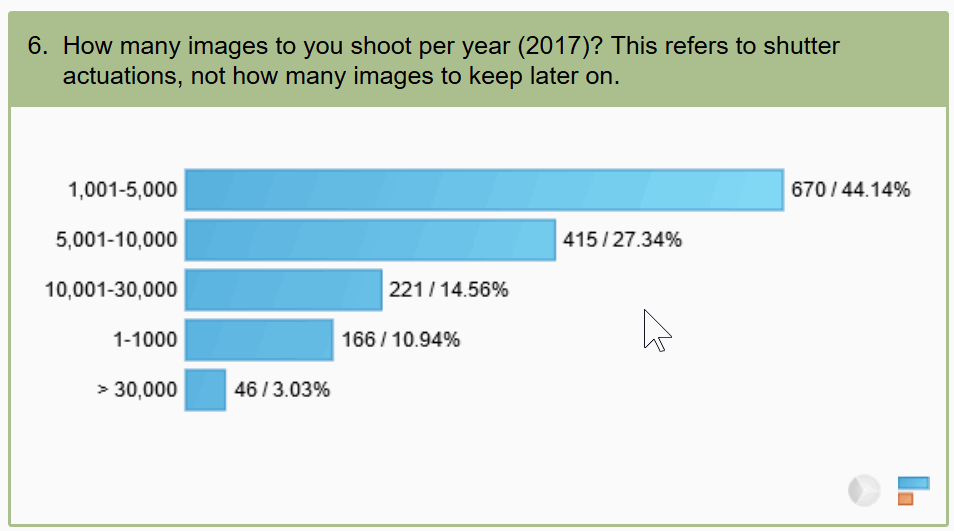 So we learn most users are not that much into spray and pray. With the relatively low <5,000 shots per year number it also means that the typical user is in no danger of ever seeing the en dof life of his shutter. If the shutter can cope with 100,000 actuations the typical user can use his Pentax DSLR for 20 years. 40 years if you have a K-1. It also seems that the focus on shutter actuations on the used market is a little overdone for most people.

Which camera tier you are most interested in as your next purchase? 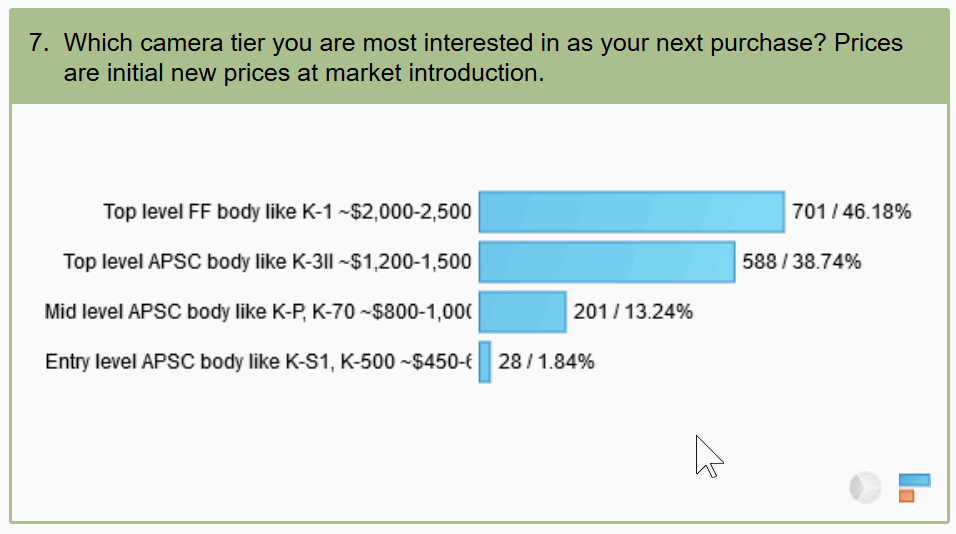 PF members seem to focus on the high end of models clearly. Not really the type of people who buy cameras in cheap stores. 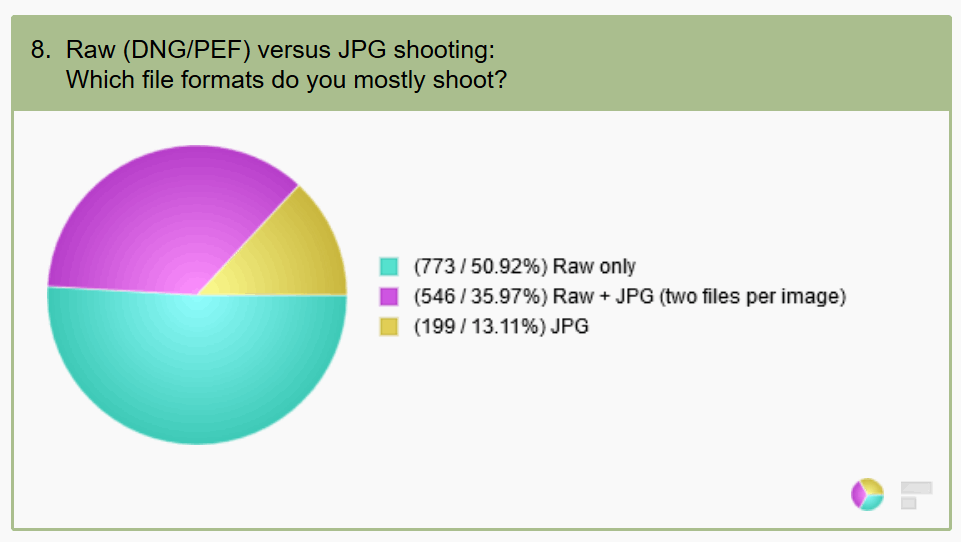 This here is somewhat against prejudices. Often forums discussions are very negative against people who dare to shoot JPG "with a semi pro DSLR". Still about half of everyone likes JPGs out of camera, at least as a backup options.

A good reason for Pentax to offer their great customizability of in-cam JPG development.

Which type of Pentax DSLR do you want to buy a lens for? 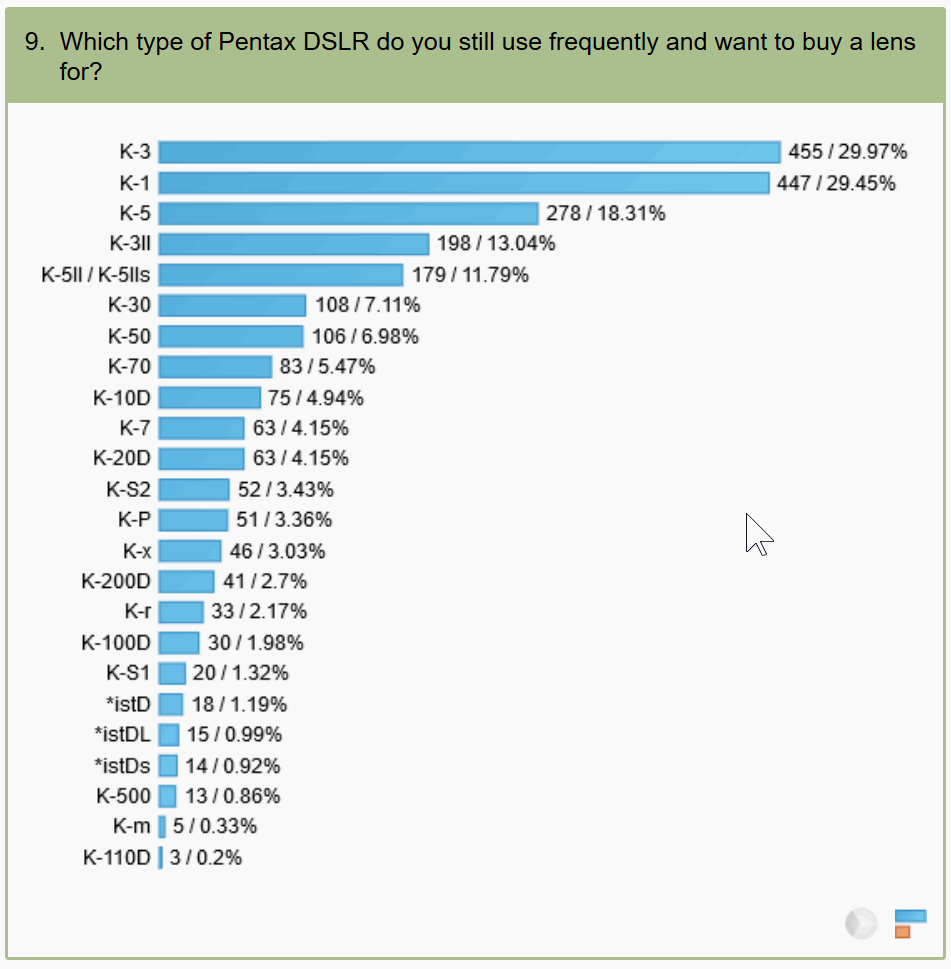 These responses fit to the previous ones: higher end and more recent models.

Have you bought a brand new original Pentax lens at an authorized dealer within the last 3 years? 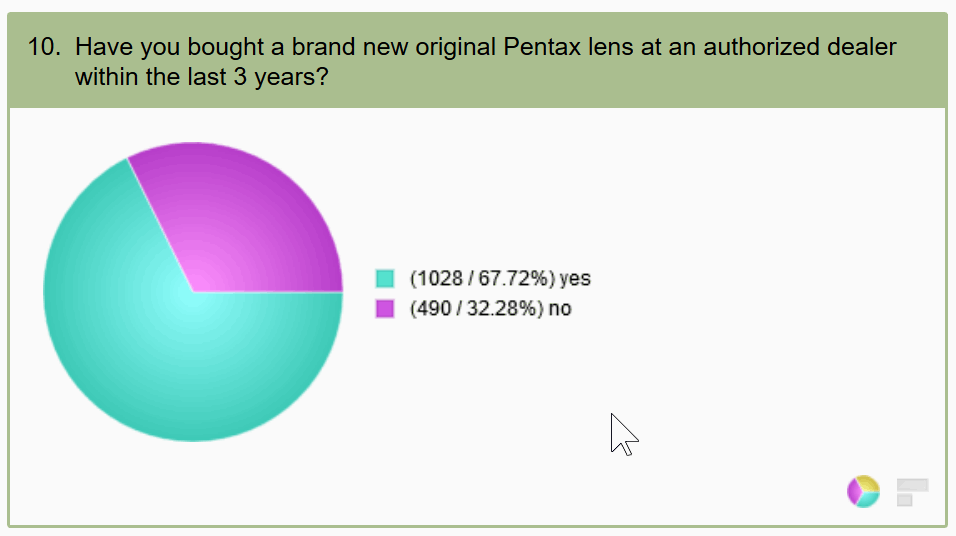 Seems the potential to sell new lenses to the users is still there.

What would be your budget for your next lens purchase? 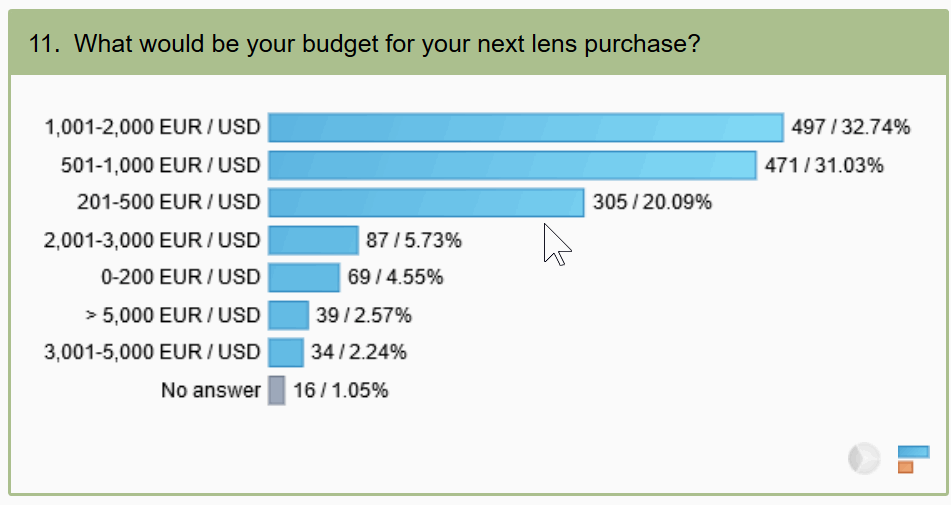 The budgets seem to be surprisingly high. So Pentaxians are not all the cheapskates.

Your top 3 most wanted (hypothetical) lenses: 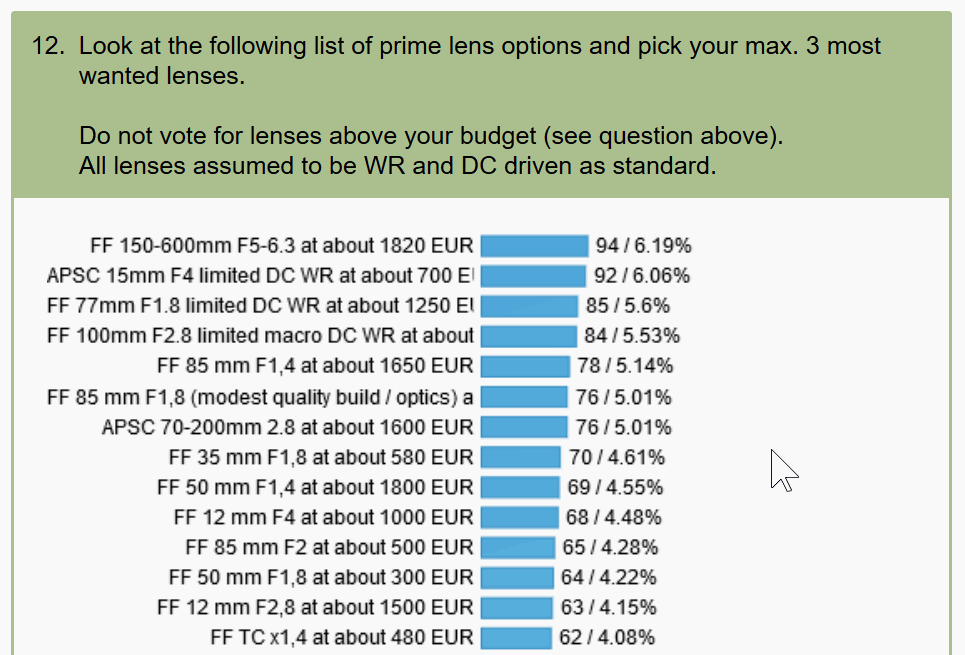 The first thing which comes to attention is the fact that no single lens is able to capture even 7 or 8% of interest, despite the option to choose up to 3. It shows that personal lens interests are very much varied.

Also the APS-C 15mm Limited really stands out from the rest. Often controversially discussed, but a little gem which could benefit from updates in motor drive and WR. It looks like the small size and its great star shaped highlights are really attractive together with its legendary flare resistance.

Normal wide angles like 20mm or 24mm do not receive top attention and also long tele primes are low on the list.

Which five of the following lens attributes do you like the most? 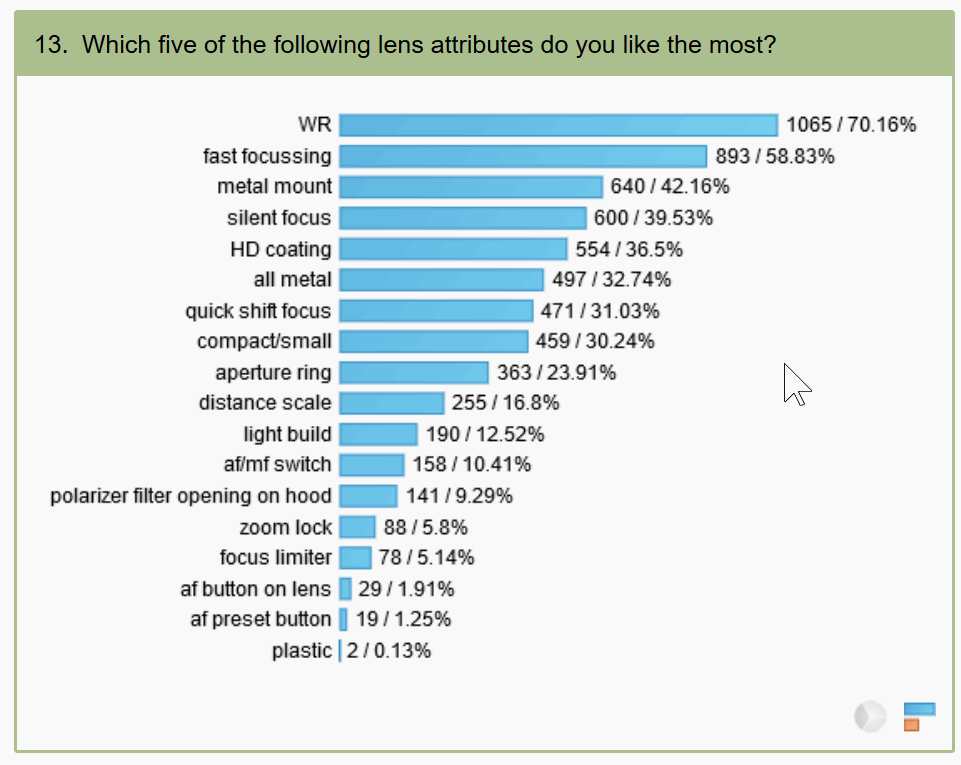 Pentaxians love WR. So this is anything but a gimmick to the vast majority.

Ratio (roughly) between primes and zooms? 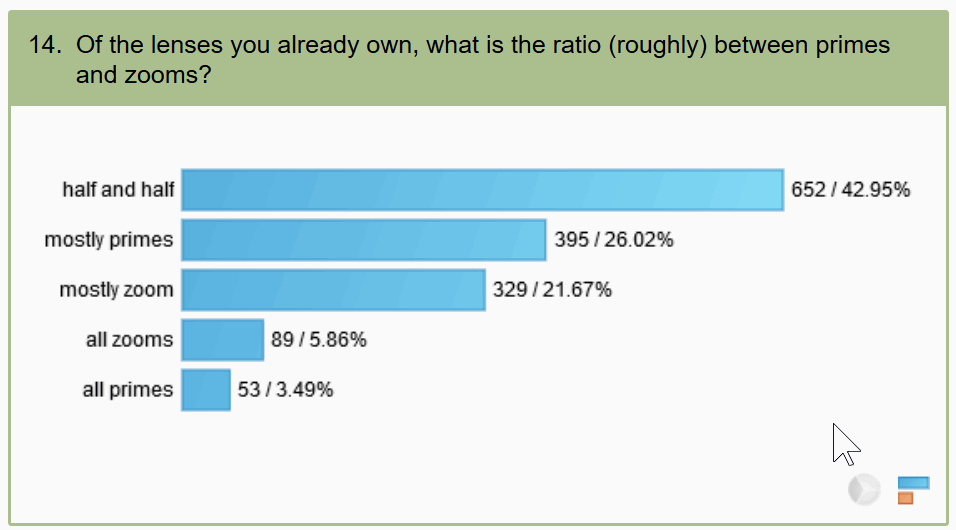 Seems like a good mixture is what poeple want.

Your most commonly used lens is a ... 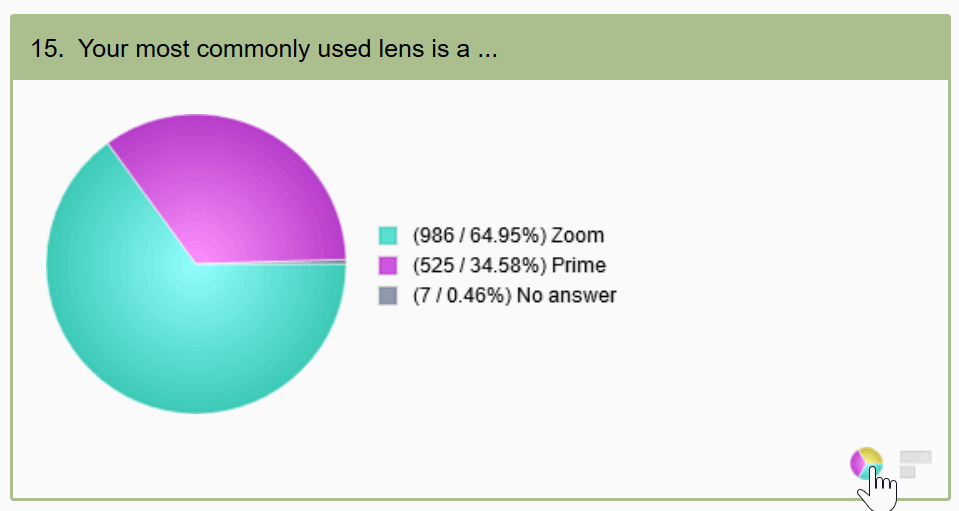 But as for usage: Zooms rule by a large margin.

Do you buy your lenses new or used? 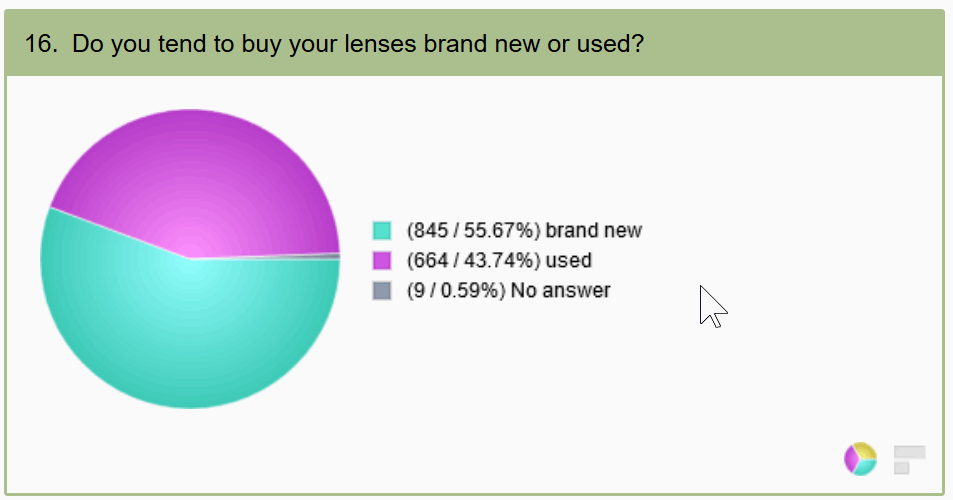 For lenses the used market seems to be very strong. And this makes a lot of sense economically.

What is your favorite focal length? 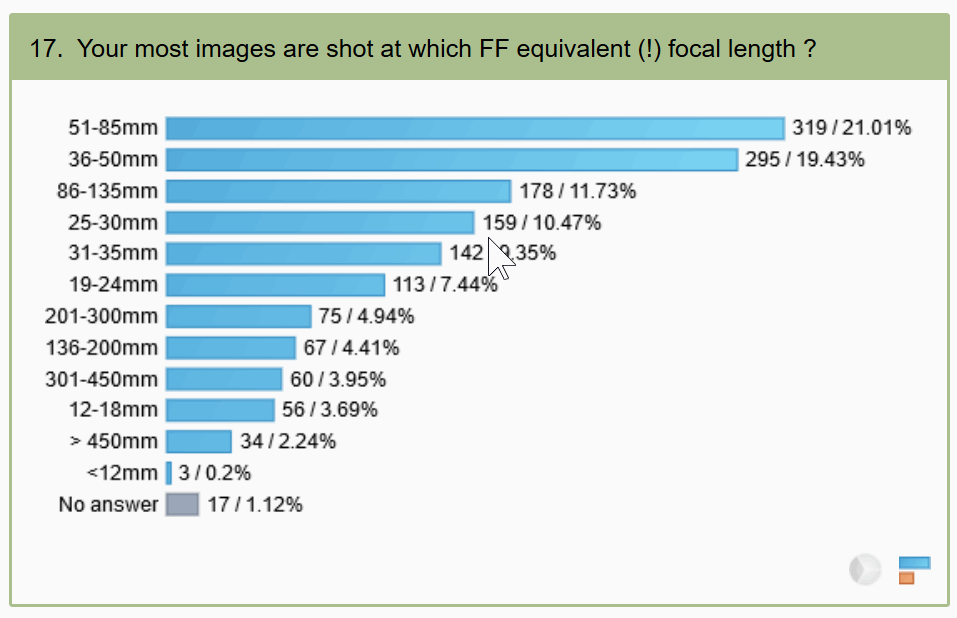 Again the standard to short tele range from 36 to 85mm is the key range for the majority. Beyond 300mm is a tiny niche.

Do you buy your cameras brand new or used? 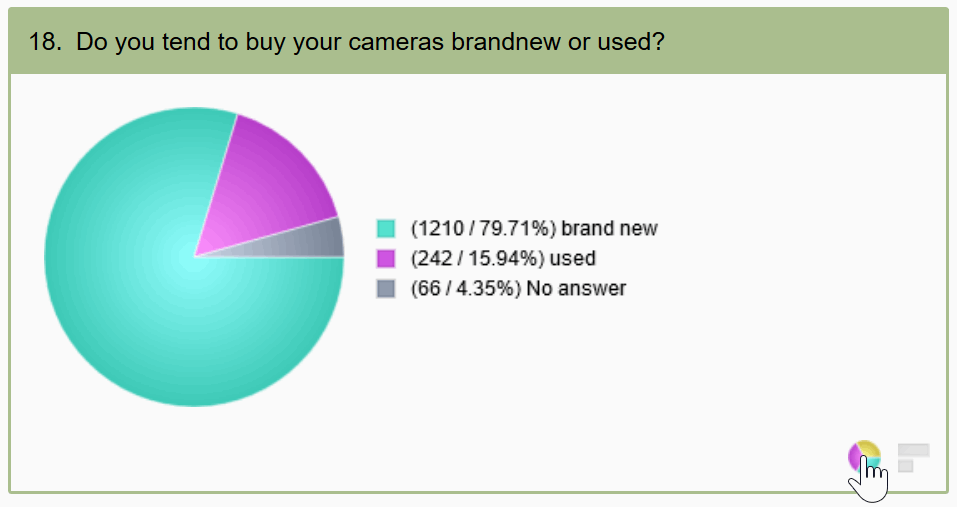 Even though buying cameras used can save the most money (their prices drop quicker than lenses'), it seems people do want to buy new cameras first. Maybe the is a little nerdy technology love involved.

What should be the focus of future camera development? 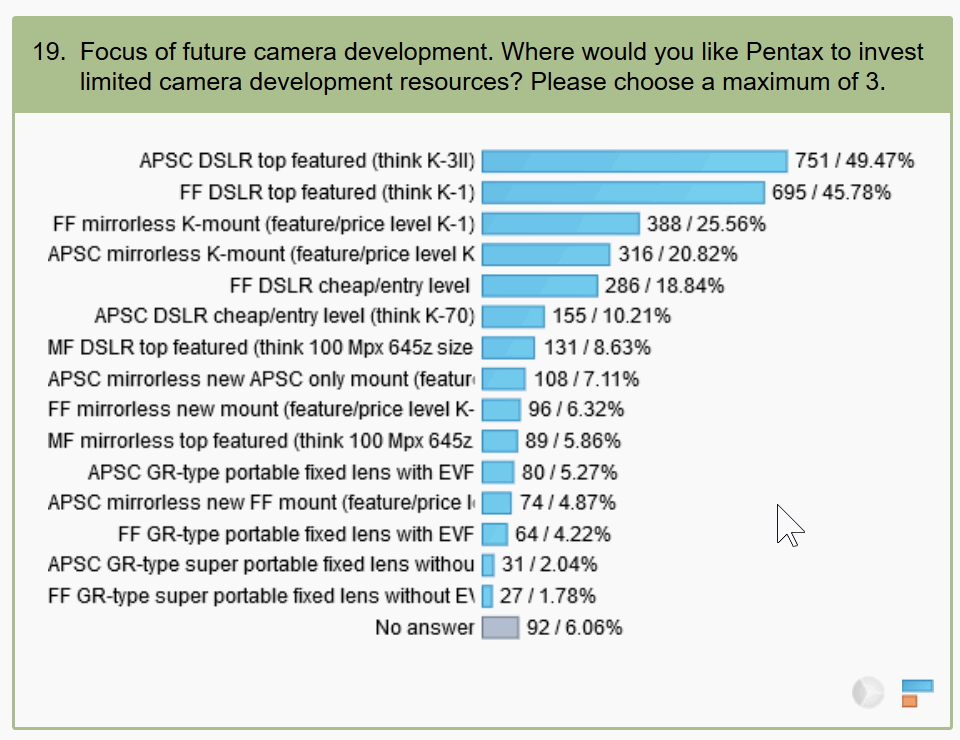 Which camera feature enhancements would you want? 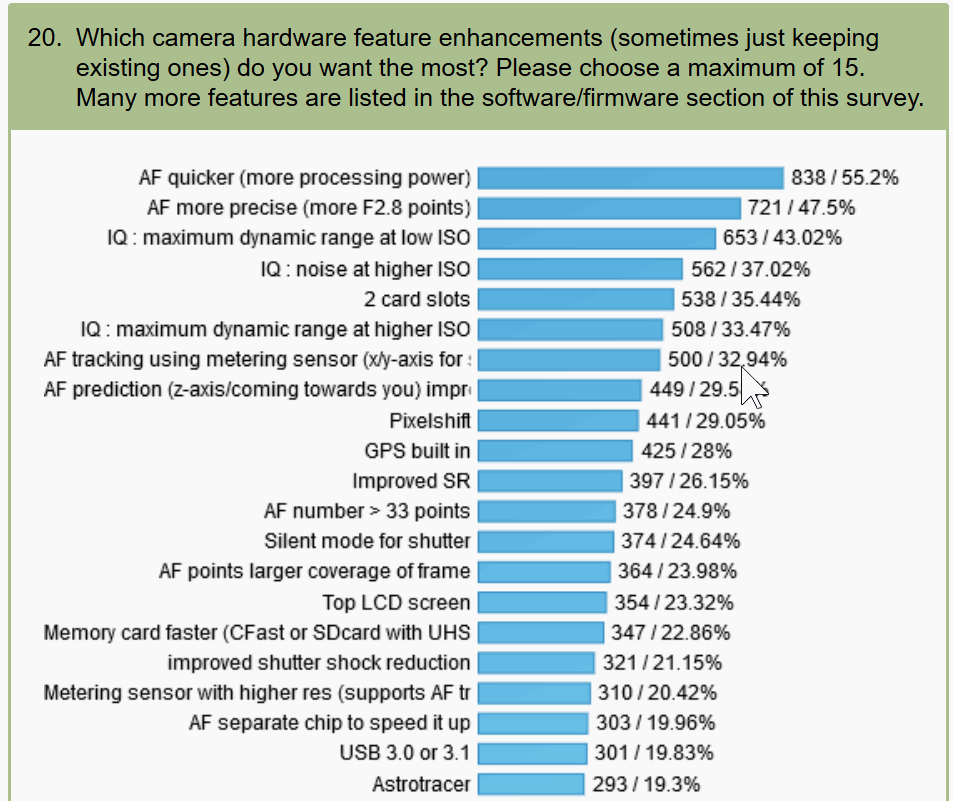 Also quite expected answers here: faster AF, higher max dynamic range and lower noise at high ISO. Pixel shift gets a lot of attention with 29%, so again this is not a gimmick to many.

Do you use tripods a lot? 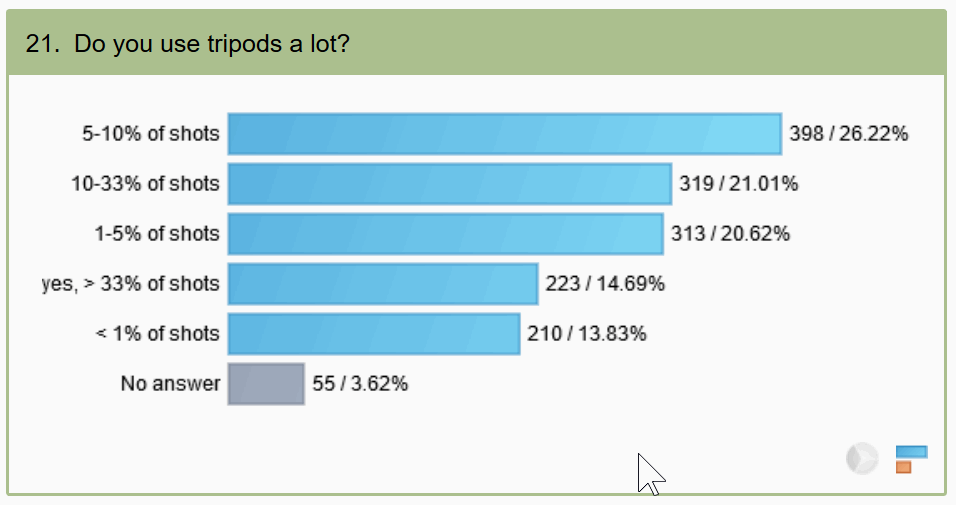 So many people seem to be using tripods at least every now and then. Not suprising given the high demand for landscape shooting.

Do you use flashes a lot? 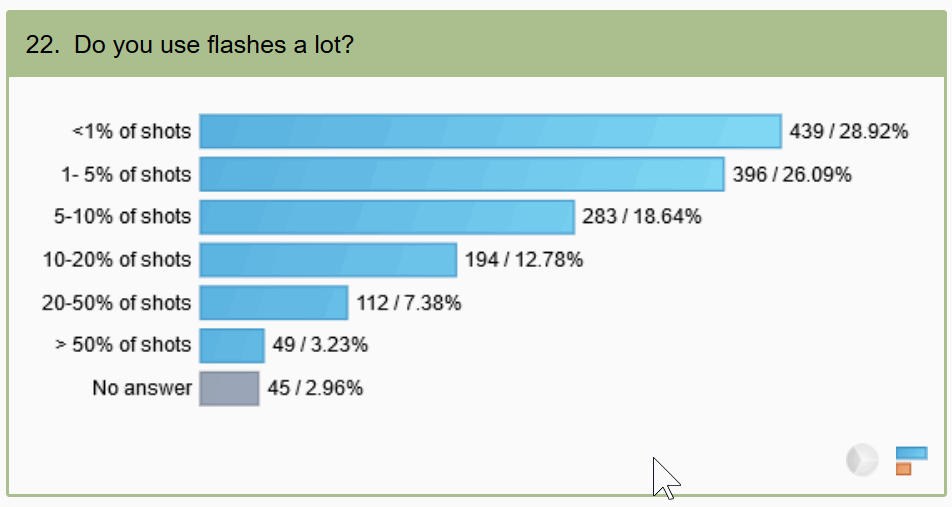 Flashes on the other side seem a clear minority concern with more than half of respondents not even using flash more than 5% of the time.

If you use flashes, how many? 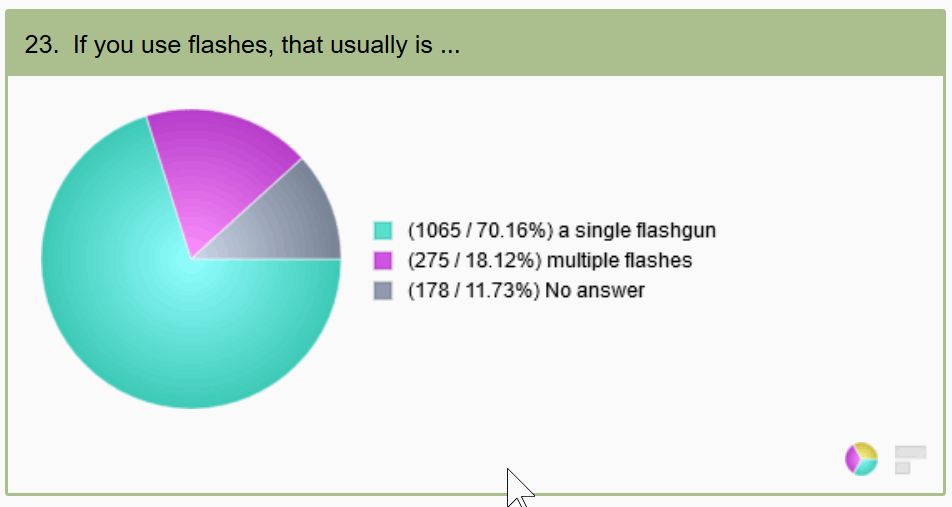 With the flash topic overall being unimportant it also follows that people at most have a single flashgun. More complicated multi flash setups are more niche territory. No wonder Pentax has not put much effort in this.

Pentaxians do NOT care about: 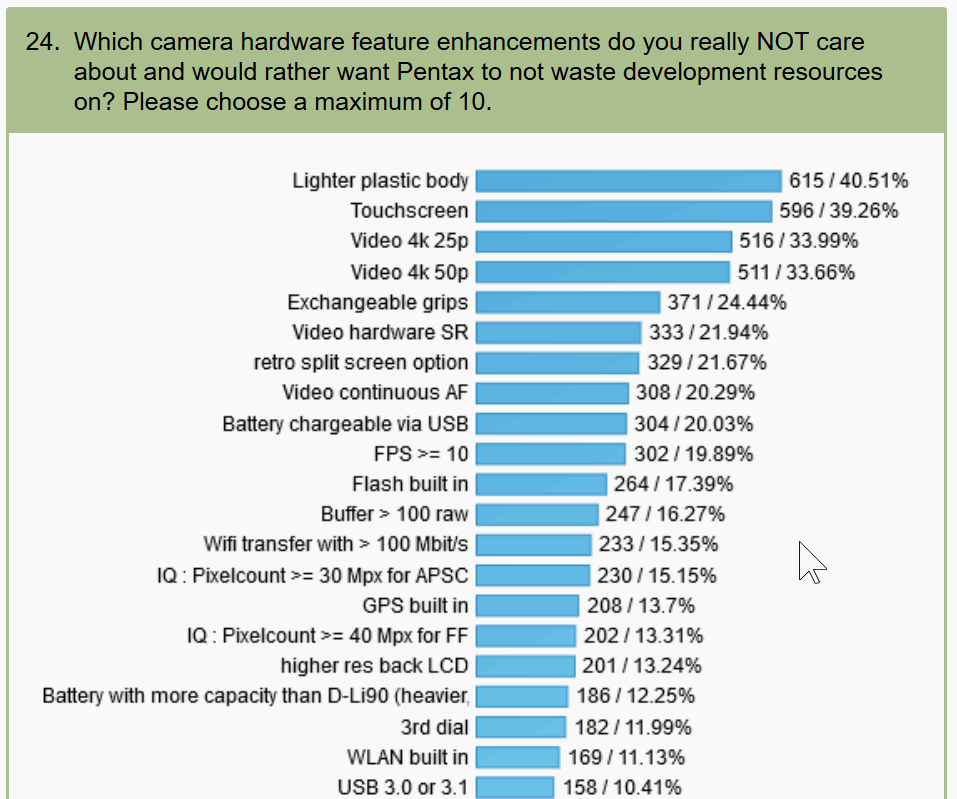 Contrary to what one might believe, 4K video seems like an unwanted feature to the majority, as are touchscreens. 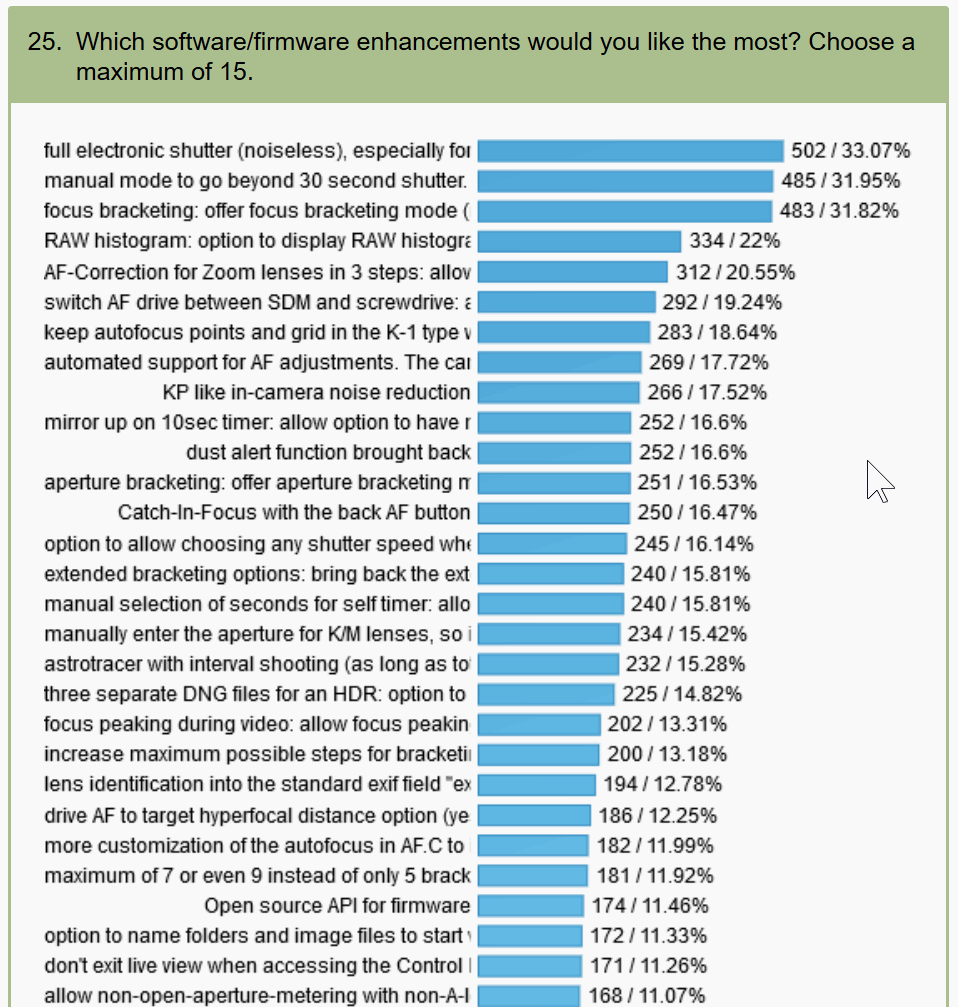 Here only noiseless shutter, longer than 30 sec exposures (editorial note: this feature is available in the K-70 and newer, up to 20 minutes) and focus bracketing stand out.

Overall there has been very nice input from the community. This helps to better understand what is forum "noise" from only a few people and what most people actually want.  It also shows that the interests of many of our users are closely aligned, and in line with the current vision of Pentax as a whole.

Dispelling a rumor: on Ricoh's use of the Pentax name