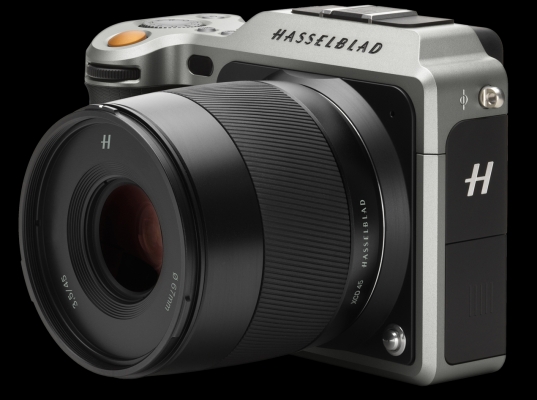 Prior to the announcement of the Pentax 645Z, many of our forum members speculated if Pentax were to go down the medium format mirrorless route.  Instead, Pentax broke ground by offering a drastically improved, video-enabled medium format model at a lower price than its predecessor.  The 645Z has since gained a tremendous following among professional photographers for its performance, versatility, and value.

Today Hasselblad departs tradition and leads innovation through a quite compact medium format mirrorless model.  The new X1D camera weighs in at just 725g and is thus lighter than many crop DSLRs (such as the Pentax K-3) despite packing a sensor that has nearly four times the area!  At $8995/€7900/£5990 it is also Hasselblad's most affordable model, though it still trails behind the 645Z, now priced at $6995 in the US.

The X1D features a 50-megapixel CMOS sensor, dual SD card slots, contrast detection autofocus, and can shoot stills up to 2.3 FPS as well as full HD video at 25 FPS.  Photos can be captured between ISO 100 and 25,600 and Hasselblad promises up to 14 stops of dynamic range.  In addition to a rear LCD with a modern touchscreen interface, the camera offers a 2.4-megapixel electronic viewfinder and fast connectivity through USB3 (C) and Wi-Fi.  Finally, it has built-in GPS, an HDMI port, and headphone/mic ports.  Like the 645Z, the X1D is weather-sealed and cold-proof.

The camera will use a new lineup of XCD lenses with built-in leaf shutters (the lineup currently consists of a 45mm F3.5 and 90mm F3.2, priced at $2295 and $2695, respectively) and will also accept existing Hasselblad lenses via an adapter.  More XCD lenses, including a 30mm, are expected this fall.

Hasselblad's new system is expected to start shipping at the end of July.

Hasselblad is based in Sweden and has been producing professional cameras for over 75 years.

While this certainly is an interesting industry development, cameras from other brands are not the focus of our homepage coverage; please proceed to the Hasselblad web site for the full product overview, press release, and specifications.

You may also discuss the X1D in this forum thread.  Do you think it sets the stage for a medium format mirrorless model from Pentax?