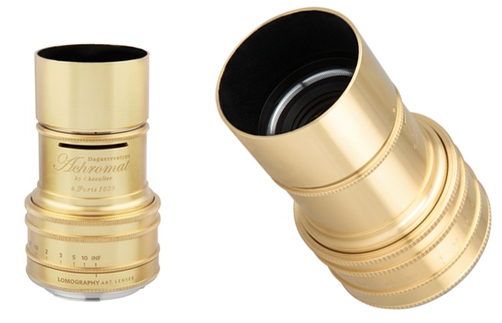 A rare opportunity has presented itself for Pentaxians: Lomography is accepting pledges via Kickstarter for a modern K-mount edition of (literally) the world's first photographic lens, the Daguerreotype Achromat 2.9/64mm Art Lens.  This lens was originally invented by Charles Chevalier nearly two centuries ago. Mounted on Louis-Jacques-Mandé Daguerre's camera in Paris, it helped capture the first ever photo of a human being in 1839.  When combined with a Waterhouse Aperture system, it can be the perfect tool for capturing beautiful photos with a unique style.

Lomography will only proceed with production of the K-mount version of this lens if it is backed by at least 50 people by May 10th.  As of the writing of this post, 10 out of 50 people have backed the project, so 40 more spots must be filled.

Update: as of May 6th, the brass lens has received enough pledges to enter production in the K mount.  Way to go, Pentaxians!

To back the project, you must pledge $400 (or more, should you be willing) via the Kickstarter page.  This will entitle you to a single copy of the lens shipped to your door, in addition to a handful of extras.  Should this lens enter production, the brass version will retail for $499 while the black version (if available) will retail for $599.  Thus, all backers get a hefty discount!

Look for "PENTAX K MOUNT BRASS LENS SPECIAL" in the sidebar of the page below.  Otherwise you might end up receiving a Canon or Nikon lens instead!

Back the Lomography 64mm F2.9 for Pentax on Kickstarter

Note that if fewer than 50 people back the K-mount project by the deadline, contributions will be refunded, or you will be entitled to an alternate mount (Canon EF or Nikon F).  Overall, more than 1700 people have already contributed to the project, thus raising a sum of nearly $800,000.

Some 3000 copies of the lens are expected by the end of the year, with the Pentax version shipping by December.

Disclosure: we are not affiliated with Lomography nor does Pentax Forums benefit from this project in any way.

If you haven't heard of Lomography, it's an organization that seeks to promote experimental and creative photography.  "Lomographers" are bold photographers who don't shy away from unusual or old-fashioned equipment and techniques.  The organization itself has run a number of successful crowdfunding campaigns in the past for other legacy lens designs; the resulting products are now available through the Lomography web store.

Lomography's Daguerreotype Achromat 64mm will be handcrafted with care from premium materials.  If you visit the Kickstarter page, you'll notice that the new lens looks just a little bit better, too! Read on to learn more about the lens and its history.

Lens Overview (from the Kickstarter page)

The Daguerreotype Achromat Art Lens is a revival of a lost aesthetic that disappeared from photography some 175 years ago.  This aesthetic was courtesy of the world's first ever photographic optic lens, invented in 1835. This historic model was built on a unique achromat design which bathed the world's earliest photographs in a powerful, alluring veil of light.

The Daguerreotype Achromat Art Lens has a focal length of 64 mm, apertures ranging from f/2.9 to f/16, and a Waterhouse Aperture plate system to produce deep, textured backgrounds rarely achieved in photography.

Today, more photographs are taken every two minutes than humanity took in the entire 19th century. In this pixelated era, Lomography believes in keeping the magic in photography alive.

It's taken years at the drawing board. Our technicians have reworked a 19th century optic design and adapted it into a bold brass lens compatible with a wide spectrum of modern day digital and analogue cameras – using both Canon EF or Nikon F SLR mounts.

The lens's optical construction has been redesigned to allow both ethereal soft focus from apertures below f/4, or razor-sharp results with deep contrasts from f/5.6 onwards.

The Daguerreotype Achromat Art Lens works with a Waterhouse Aperture Plate system, which allows full creativity with depth of field, and loads of variation in bokeh effects.