Mirror, Mirror: The 645 Digital System at a Crossroads

By deadwolfbones in Photo Industry News on Jan 20, 2017 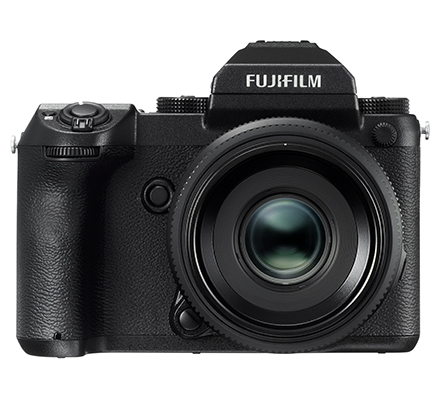 In many ways, 2016 was a landmark year for Pentax and Ricoh. The company released its first full-frame digital SLR, a fantastic mid-range APS-C body, and a worthy addition to its increasingly popular Theta 360-degree camera lineup.

The first two achievements in particular helped bring Pentax up to par with its competition. The lack of a full-frame DSLR had for years been seen as a sign of Pentax's un-serious attitude to growing market share and attracting professional users, so releasing the formidable K-1 was a huge step forward. And the K-70, while still underwhelming in some ways, introduced a number of new, long-awaited technologies to the Pentax faithful: most notably, on-sensor PDAF for continuous video autofocus.

But as heartening as these developments may be, they still only bring Pentax closer to being feature-competitive with the likes of Canon, Nikon, and others. They don't push it ahead of those rivals, and indeed in some ways (video, most prominently) Pentax cameras continue to lag behind.

For years Pentax has had a trump card to silence critics who would question its commitment to pros and hardcore enthusiasts: the 645 digital series. Since the introduction of the 645D in 2010, Pentax has been the only brand offering a complete medium format digital solution under the $10,000 price point. That's a big deal.

Or, rather, it was. While the 645Z improved on the template, other brands have been looking further ahead, and with the recent announcement of the Hasselblad X1D and especially the Fujifilm GFX 50S, Pentax can no longer claim exclusive domain over this increasingly attractive category. In fact, considering everything that the GFX 50S offers at its market leading $6,500 price point, you could argue that Pentax is once again trailing the field in every category.

The age of mirrorless MF is upon us

If you haven't already pored over the GFX 50S's spec sheet, here's the deal. At its core, it's a mirrorless version of the 645Z, with the same size and resolution CMOS sensor. There are a few differences here and there, like the 645Z's wider ISO range (up to ISO 204,800, compared to the Fuji's ISO 102,400), but all told the two cameras are built around very similar imaging chains.

The biggest differences are undoubtedly in size, weight, and—potentially—usability. Thanks to its mirrorless design, the GFX 50S weighs only a little more than half as much as the 645Z: 29.1oz to 54.9oz. It's also far less bulky, shaving about an inch in both height and depth. Those are savings that will make a real difference for working professional photographers (or their assistants) who have to carry their gear all day, every day.

(For its part, the more expensive, equally mirrorless Hasselblad X1D-50c is even smaller. Its screen doesn't tilt out and most controls are relegated to a touchscreen interface, but at a mere 2.8 inches thick, it's breathtakingly, almost ludicrously svelte. Check out the comparisons later in the review.) 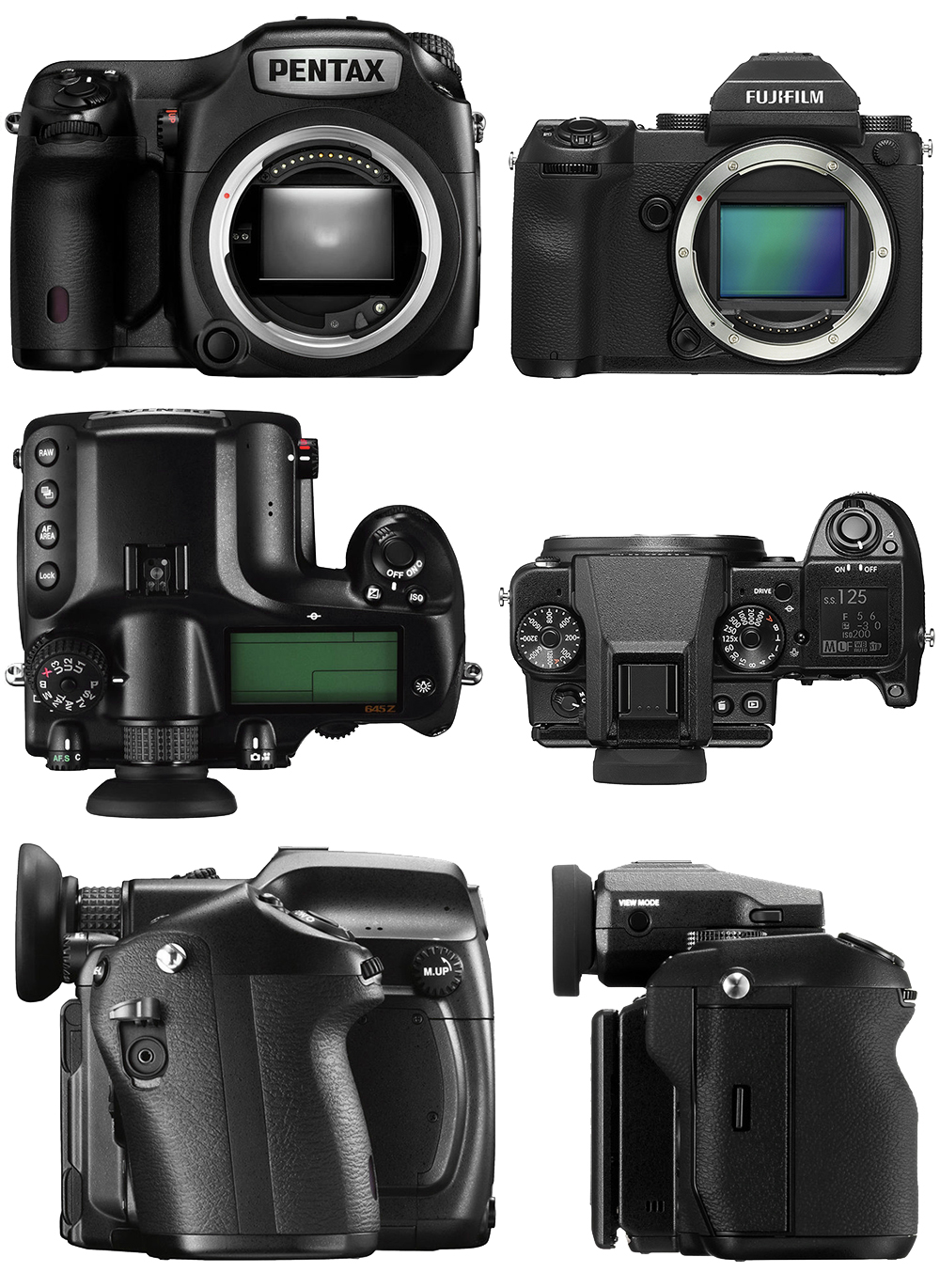 Those same pros—some of them, anyway—will appreciate Fujifilm's trademark control scheme, which has translated largely unmolested from the X100 series, to the XT series, and now up to the GFX 50S. If you've been paying attention over the past half decade, you know the drill: lots of manual controls, with dedicated dials for ISO and shutter speed that appeal to old-school shooters and new-school purists alike. For its part, shooting with the 645Z similarly feels much like shooting with a K-3 or K-1, but Pentax's admirably functional control scheme has never aroused photographers' passions like Fuji's has managed to.

And if the GFX 50S's autofocus system is anything like the systems in the X-series cameras, it will be faster and more flexible than the aging SAFOX array in the 645Z. Compared to Pentax's 27 AF points, the GFX 50S offers 117 points. Sure, they're contrast-based, but for the kind of shooting you're likely to do with a camera like this, they'll more than get the job done.

In spite of this impressive debut, Fujifilm certainly has a hill to climb. Its lineup of three lenses is paltry next to Pentax's 18 autofocus designs and many more film-era manual focus models. However, Fujifilm has a strong track record when it comes to lens design, and it would be foolish to doubt the company's dedication to building the system. Three more lenses are already on the roadmap for later this year, and we've seen how quickly the company has built out its X-series ecosystem. 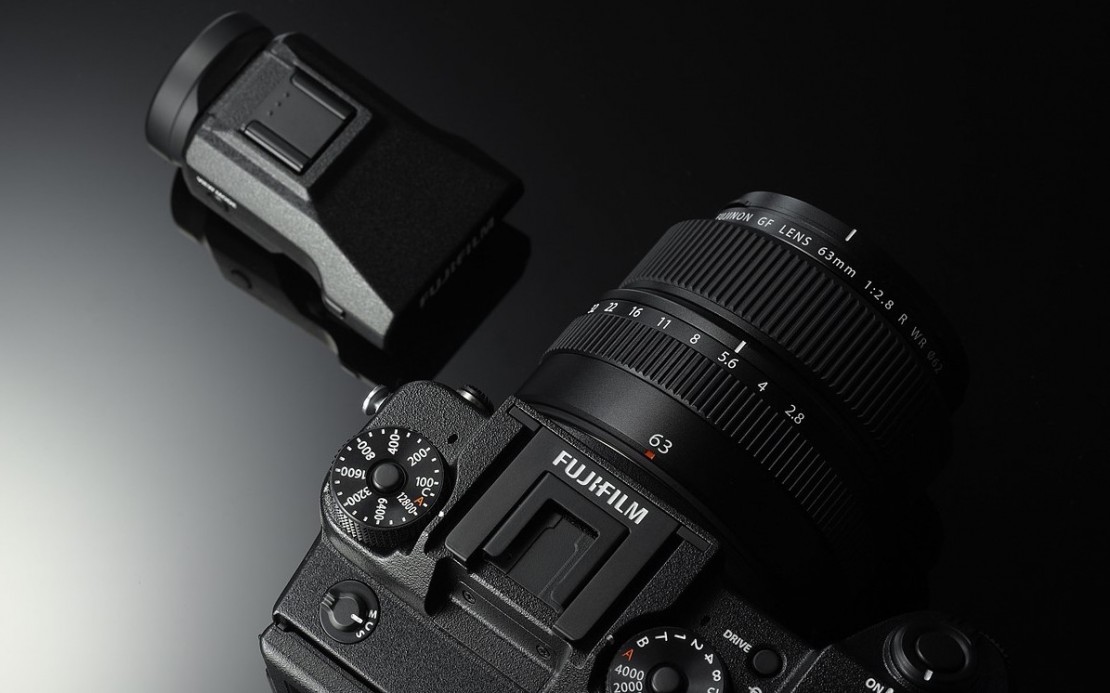 Another consideration is the GFX 50S's electronic viewfinder. It's big and beautiful and can be tilted up or down, or removed entirely. Those who have already embraced (or at least resigned themselves to) EVFs will relish the half-inch, 3.69m-dot OLED display, but there are undoubtedly those who would trade it for the natural clarity of the 645Z's pentaprism OVF in a heartbeat.

What it all means for Pentax

Fujifilm's GFX 50S is debuting at $500 less than the Pentax 645Z's current street price, and $2,000 less than its original MSRP. With any luck, that $6,499 asking price will serve as a wakeup call for the designers and execs at Ricoh.

Even in the company of this surprisingly affordable newcomer, the 645Z isn't expensive for a medium format digital camera. At its current $6,999 price it's far cheaper than the upcoming Hasselblad X1D ($8,895) and every other serious medium format digital body aside from the new Fuji. But being the second-best value isn't good enough for Pentax. With so little market share, it needs a truly standout product to attract new users and grow.

Of course, the 645Z is now nearly three years old, so it's not entirely surprising that it has been overtaken by an upstart rival. It would be a shock, in fact, if Ricoh isn't already putting the finishing touches on a 645Z II. Still, it will take more than a slightly revamped body with a higher-res sensor to take the fight back to Fujifilm and the other mirrorless medium format bodies that will inevitably follow the GFX 50S and Hasselblad X1D. Mirrorless technology isn't going anywhere; in fact, mirrorless camera shipments are growing or at least staying flat, while traditional DSLR shipments are slowing.

Is it too late for the Pentax 645 Digital system to move to mirrorless? In a very real sense, the brand is stuck between a rock and a hard place.

So much of the Pentax mythos is built upon backward compatibility, and there's no easy way to change mounts while still bringing legacy lenses along for the ride. The only feasible path is to pull a Canon and kiss the old mount goodbye, alienating many fans in the process. Still, if there's any place it would make sense to experiment with such a strategy, it's the small (but increasingly vital and relevant) medium format market.

The Pentax 645Z, Fujifilm GFX 50S, and Hasselblad X1D-50c handily demonstrate the effects of getting rid of the reflex mirror (relative sizes are approximated).

Pentax users have never been shy about asking for new features and products, and while it may sometimes feel like those requests fall on deaf ears, recent releases like the K-1 show someone at Ricoh is paying attention.

With this in mind, what do you see as the future of the 645 Digital system, and of medium format digital as a whole? Does Pentax need to make a bold move to stay ahead of the curve, or should it stick with what has worked? Let us know what you think in the comments.