according to a recent J.D. Power and Associates Survey 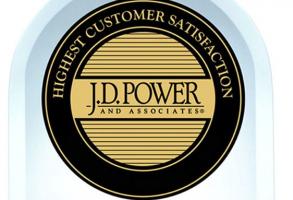 In a DSLR user survey published by J.D. Power & Associates last week, Pentax ranked the highest in terms of customer satisfaction for online DSLR buyers among all the evaluated brands, which included the "big two".  Pentax scored 899 points on a 1000-point scale, and were closely followed by Nikon and Canon, who scored 891 points and 888 points, respectively.  For consumers, Pentax and Nikon were subjectively rated as being "among the  best".  Their high ranking is a very good sign for Pentax, considering that the majority of their US-based sales take place online and so customer satisfaction in this area is particularly important for them.

The criteria evaluated to arrive at these scores were as follows (in order from most heavily weighted to the least): image quality, durability and reality, feature variety, ease of operation, and shutter lag/response time.  These seem to be realistic factors which we also consider whenever we review a new camera body.

Sara Wong Hilton, the director at J.D. Power, noted that Pentax's customer base has shifted to include more semiprofessionals and professionals, rather than just casual photographers, compared to last year.  In addition, she states that across the industry, there are more "self-identified semiprofessionals," which will lead to the purchase of more high-end camera systems than last year.  If this prediction is true, then from a marketing standpoint, the coming months would be an excellent time for Pentax Ricoh to release a new high-end APS-C camera body, or even a full-frame DSLR.

The J.D. Power report also found that in 2012, photographers spent an average of about $350 more on their cameras than in 2011; the average price when from $939 to $1291. Despite their bigger spending, the overall customer satisfaction with DSLRs remained stable. Does this mean that prospective customers are prioritizing the performance of the cameras they consider, rather than looking for low prices?

J.D. Power & Associates is a US-based marketing information company that provides customer satisfaction rankings, performance insights, and reviews of a very broad range of companies and services.  Their full reports are available at JDPower.com.  Click here to discuss this story on our Pentax forum.