Reflecting on the Pentax K-S1 Launch

A fresh take or a misguided concept?

Pentax/Ricoh's recent announcement of the Pentax K-S1 DSLR leaves us with plenty to talk about, and in this article, we will be talking a closer look at what's new and how we think it will fare.  Let's start with a disclaimer: if you are reading this, you are most likely a Pentax enthusiast, so this camera is not designed with your needs in mind.  But we can still discuss the idea behind it and draw our own conclusions, of course!

The launch of the K-S1 is a bold attempt to regain customers.  In its press release, Ricoh Imaging Americas acknowledges that this camera targets "next generation Pentax owners" accustomed to "mobile interfaces".  The company hopes to accomplish this through a redesigned user interface that has done away with the traditional mode dial.  The camera itself also looks different than your old-fashioned DSLR: its grip, which reminds us of a compact mirrorless camera, has been lined with attention-grabbing LED lights and multicolored accents.  Some of the available color schemes look rather stylish and modern, such as the metallic blue and the white/grey (let's just look the other way with the Midnight Black and Sunset Orange). Thus, at first sight, the K-S1 seems like a well thought-out way to attract photographers who may have ditched their DSLRs years ago, and especially those who are looking for something a bit more next-gen.

This apparent departure from the norm has had a negligible effect on the camera's internal hardware, however.  Under the hood, the K-S1 is essentially an upgraded (and thus more expensive) Pentax K-50.  It makes few compromises in terms of features, and it even has the larger optical viewfinder (with 3% more magnification than the K-50/K-500) and AA filter simulator from the Pentax K-3— refinements that novices would probably never notice, let alone appreciate.  From a still photographer's standpoint, this camera is actually quite advanced, even among competing brands.  Experienced DSLR users will feel at home with the K-S1, but they aren't exactly the target audience. 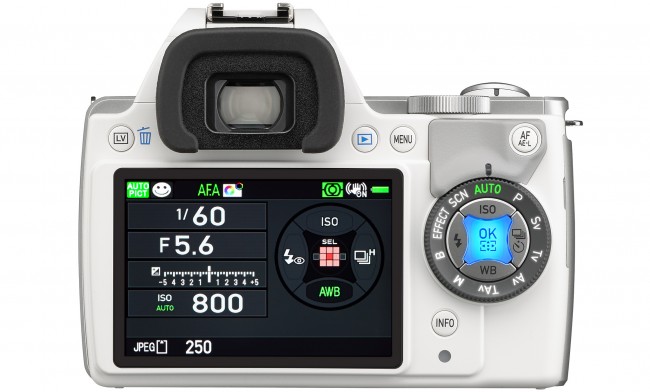 Interestingly, apart from a handful of repositioned buttons and a modern facade, the K-S1's user interface has seen no fundamental changes compared to the already-simple UI of Pentax's consumer DSLRs.  Evidenced by DPReview's hands-on impressions of the K-S1, its menu system is essentially the same as what's on current Pentax bodies with the exception of the fonts.  The new interface doesn't seem to make the camera easier to use with a single hand, either, and the slender grip seems to be a step back ergonomically.  Lastly, for a camera that's designed for a tech-savvy crowd, why does the Live View button continue to be isolated (unlike on the K-3 and K-5) and out of reach of the right hand?

"Next generation" photographers— i.e. smartphone or gadget users— expect to see technological gimmicks that enhance workflow and usability.  Thus, we would expect the K-S1 to incorporate at least a small amount of new technology.  Sadly, it turns out that there is nothing of the sort: no Wi-Fi, no touchscreen, no social connectivity, and no tilting screen.  The K-S1 still only has the basic video features provided by the K-50, and its autofocus and metering systems date back several generations.  In fact, apart from the PRIME M II processor and the 20.2 megapixel sensor, it seems that there's nothing fresh in this camera at all.  Let's not forget that the K-S1 has shed the K-50's weather sealing, and that the kit lens is noisy while focusing (the silent-focusing 18-135mm is only available separately).  All these things combined may prove to be a big turn-off for consumers who are expecting a "wow" factor up-front.  The $799 price tag makes the K-S1 the second most-expensive Pentax model currently available (after the K-3), and also $200-400 more than entry-level offerings, including Pentax's own K-500.  Will consumers be willing to fork over the extra cash for the K-S1's classic DSLR refinements while overlooking the lack of modern tech?  Will the K-S1's unique appearance and interface be convincing enough and attract enough attention and generate sales?

For the sake of helping our beloved brand's employees improve future products, here is a list of things that we think could easily be improved in future generations of this type of camera:

Only time will tell whether or not the K-S1 will sell well, or if it'll instead follow in the footsteps of the lovable yet poorly-executed K-01.  What we can say right now is that thanks to the K-S1, the current Pentax DSLR lineup consists of five distinct bodies.  This is a new high, and we hope that the trend continues and keeps Pentax on the road to success.

Despite what we might think at the moment, maybe (just maybe) the K-S1 and its new PRIME M II processor will end up surprising us all when we go to review it in the fall.  Perhaps it will also see a consumer-friendly Black Friday discount.  Until then, tell us what you think of the Pentax K-S1: have your say in the comments section below, or post on the forum.