This has just changed with Ricoh's announcement that Youtube now supports 360-degree videos captured by the Theta m15. This is welcome news and we hope that it will not only make spherical videos more appealing to consumers, but also the Theta camera itself.

The fascinating aspect of the Theta's video files is that they allow you to relive experiences like never before, since spherical video files allow you to "look" all around the camera by panning and zooming. There is no better way to demonstrate this than to show a video of a Theta video file being played back in the desktop app:

Since the Ricoh press release (quoted below) is rather thin in terms of information on the new Youtube feature, we did some research on our own and found out that this same panning and zooming is now also possible on Youtube!  Youtube rolled out 360-degree video support back in January, coinciding with the 2015 Consumer Electronics Show.  The Giroptics 360cam was the first camera to support Youtube's 360-degree format.  Recently, that support has been extended to the Ricoh Theta's files thanks to an update to the Ricoh Theta desktop app.  Videos from the Theta must first be converted into .MP4 files via the Theta app, and then 360-degree metadata needs to be added via a special Youtube app/script. Once that's done, you can upload the resulting 360-degree video file straight to Youtube and it will be recognized as such.

Youtube's spherical video support is currently limited to the Google Chrome (desktop) web browser and the Youtube Android app.  If you get a chance to try out the Android app, you'll discover that tilting your phone actually pans the 360-degree video accordingly— an impressive feature.  If you're currently on either of those platforms, click here for a sample 360-degree Theta Video.

Given the two-step process for creating Youtube-compatible spherical videos, it's evident that this feature is still in its infancy.  We think that it's only a matter of time before the Theta will be able to upload its videos straight to Youtube, though! 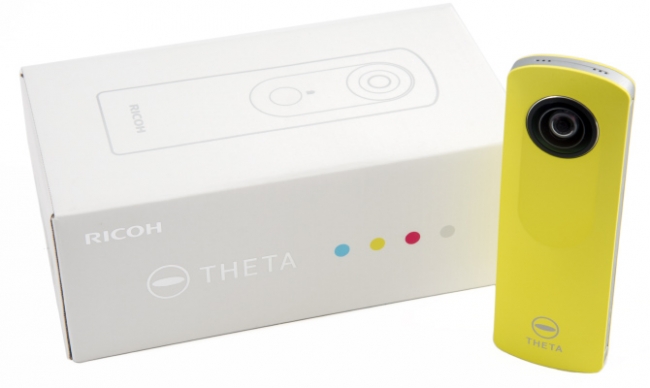 We recently reviewed the new Theta, and found it to change the way users approach photography and in a very innovative way.  The camera is fun to use and at just $296, we don't hesitate to call it a good value.  If you have yet to try the Theta or overlooked it in the past, we encourage you to take it for a spin!  It also makes for a great gift idea.

Denver, Colorado March 16, 2015 - The World of 360 degree spherical video is now widely accessible with the help of YouTube and the RICOH THETA™ spherical camera is at the forefront of this trend.  YouTube has recommended the RICOH THETA™ as a key device in creating innovative content for their new video platform.

The RICOH THETA™ m15 pioneered ground-breaking video capture with its ability to record HD spherical video, at 15 frames per second, with clips up to three minutes in length.  No longer is there a need for multiple cameras to create video that can be panned and tilted during playback. One simple click captures stunning 360 degree spherical video to view on your personal devices or upload to YouTube’s new service.

With the announcement of YouTube’s 360 degree spherical video support, the world of content sharing is much more accessible worldwide. THETA™ spherical camera users simply create their 360 videos, upload MP4 video files generated with Windows and Mac software (Version 1.10.0 or later) to YouTube and share with family and friends; taking advantage of the easy sharing and commenting pioneered by YouTube.

Click here to order your Theta m15 at B&H Photo

Good News for Film Users from Kodak and Ilford