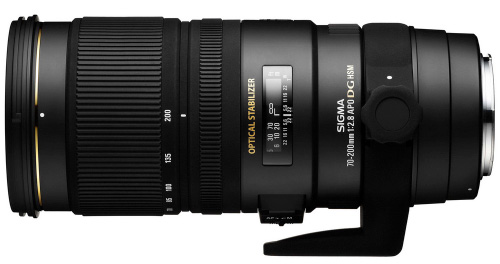 Since the debut of its reinvented Global Vision lens lineup, Sigma has been offering most of its new lenses in the Pentax mount.  The company's more recent designs such as the 35mm F1.4 "Art", 18-35mm F1.8 "Art", and 17-70mm F2.8-4 "Contemporary" have received praise by our users and in our in-depth reviews, and many other Sigma lenses have filled gaps in the high-end Pentax lens lineup or provided more affordable alternatives.

We've recently learned about the discontinuation of a popular lens from Sigma: the 70-200mm F2.8 OS HSM telephoto zoom.  According to a customer service e-mail, the low sales volume of the Pentax version of this lens no longer justified its production.  It will continue being available for Canon and Nikon, though we speculate that it may soon see a successor as part of Sigma's "Sports" lens category.

The Sigma 70-200mm F2.8 OS HSM has been pulled from the websites of US retailers such as B&H Photo, Adorama, and Amazon.  If you've been considering this lens, now may be the time to scout other sites or local stores for a copy before it's gone for good!

Tamron's older 70-200mm F2.8 Di LD Macro is now the only 70-200mm F2.8 K-mount lens currently in production.  Interestingly, though, a similar zoom lens appread on the genuine Pentax lens roadmap in February. Could Pentax be collaborating with Tamron to release the newer stabilized version of their 70-200mm in the K-mount?

Reflecting on the Pentax K-S1 Launch