Sony recently announced the successful development of a digital imaging sensor that records all pixels simultaneously, a function known as a "global shutter." While this technological advance is still in its early stages, it might foreshadow advances found in future Pentax cameras

The advantages of a global shutter come from recording across the full sensor for the entire duration of the exposure. This contrasts with existing shutters, which expose different parts of the sensor at different times, presenting challenges when shooting with a flash or when the subject is lit by flickering lights (including LEDs and fluorescent tubes). Current electronic shutters, while offering the advantages of being silent and avoiding shutter shock, are much slower and more challenging to use than traditional mechanical shutters. A camera with a global shutter would offer the best combination of today's electronic and mechanical shutters.

Sony's demonstration unit is able to record at a maximum frame rate of 660 frames per second with a resolution that would scale to 8.1 megapixels in an APS-C camera or 18.1 megapixels in a full frame camera. This is, however, only a technology demonstration: availability was not announced for sensor components, much less cameras that use them.

Unfortunately, it usually takes several years for announcements like this to mature into commercial products. We hope that Sony will commercialize this new sensor technology quickly, however, perhaps in time for the following generation of Pentax DSLRs.

A Quick History of Imaging Sensors for Digital Photography

Early commercial imaging sensors were based on charged-couple device (CCD) technology. CCDs use a lot of energy along a lengthy pathway from photon capture to digital conversion, making them difficult to optimize for battery-powered devices, especially when implementing features that operate continuously such as video and live view. CCDs were used in Pentax DSLRs up through the K100D Super released in 2007 and the 645D released in 2010.

Since then, most digital imaging sensors have been based on complementary metal-oxide-semiconductor (CMOS) technology. The challenge inherent in CMOS senor designs is that they require circuitry to be placed in or immediately adjacent to each sensor element. The first CMOS devices in the 1970s were impractical because the circuitry itself was so large that it cast a shadow over much of the sensor. However, as semiconductor fabrication has improved, the wiring and circuits have become small enough to give CMOS compelling advantages.

Sony's Exmor brand has represented the most visible advances in CMOS technology over the past decade. Exmor sensors use on-chip analog-to-digital converters (ADC) with a two-step noise reduction path for each column of pixels on the sensor. This technology may be found in Pentax cameras from the K-5 (2010) to the KP (2017). 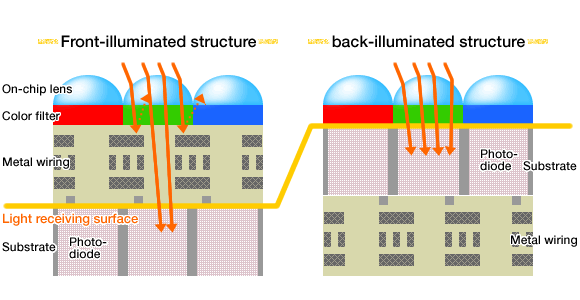 Sony's next major advance has been promoted under the Exmor R brand. These sensors use a modified fabrication technique to allow light to enter from the bottom of the chip, meaning that the in-chip circuitry blocks very little if any light from entering the sensor. This technology is primarily found in smartphone cameras.

Sony then split the sensor into two layers, one dedicated to capturing light and one dedicated to the wiring and circuitry necessary to digitize the image. This technology has been branded as Exmor RS and, to the best of our knowledge, has only been used in small sensors such as in smartphone cameras.

The current announcement describes a two-layer Exmor RS sensor that adds a dedicated analog-to-digital converter (ADC) for every pixel to the wiring and circuitry layer, or "logic substrate." This allows each pixel to be digitized simultaneously, providing the global shutter function.

Tokyo, Japan -- Sony Corporation today announced that it has developed a 1.46 effective megapixel back-illuminated CMOS image sensor equipped with a Global Shutter function*1. The newly developed pixel-parallel analog-to-digital converters provide the function to instantly convert the analog signal from all pixels, simultaneously exposed, to a digital signal in parallel. This new technology was announced at the International Solid-State Circuits Conference (ISSCC) on February 11, 2018 in San Francisco in the United States.

CMOS image sensors using the conventional column A/D conversion method*2 read out the photoelectrically converted analog signals from pixels row by row, which results in image distortion (focal plane distortion) caused by the time shift due to the row-by-row readout.

The new Sony sensor comes with newly developed low-current, compact A/D converters positioned beneath each pixel. These A/D converters instantly convert the analog signal from all the simultaneously exposed pixels in parallel to a digital signal to temporarily store it in digital memory. This architecture eliminates focal plane distortion due to readout time shift, making it possible to provide a Global Shutter function*1, an industry-first for a high-sensitivity back-illuminated CMOS sensor with pixel-parallel A/D Converter with more than one megapixel*3.

The inclusion of nearly 1,000 times as many A/D converters compared to the traditional column A/D conversion method*2 means an increased demand for current. Sony addressed this issue by developing a compact 14-bit A/D converter which boasts the industry's best performance*4 in low-current operation.

Both the A/D converter and digital memory spaces are secured in a stacked configuration with these elements integrated into the bottom chip. The connection between each pixel on the top chip uses Cu-Cu (copper-copper) connection*5, a technology that Sony put into mass production as a world-first in January 2016.

In addition, a newly developed data transfer mechanism is implemented into the sensor to enable the high-speed massively parallel readout data required for the A/D conversion process.

*2: Method where the A/D converter is provided for each vertical row of pixels in a parallel configuration.

*5: Technology that provides electrical continuity via connected Cu (copper) pads when stacking the back-illuminated CMOS image sensor section (top chip) and logic circuits (bottom chip). Compared with through-silicon via (TSV) wiring, where the connection is achieved by penetrating electrodes around the circumference of the pixel area, this method gives more freedom in design, improves productivity, allows for a more compact size, and increases performance. Sony announced this technology in December 2016 at the International Electron Devices Meeting (IEDM) in San Francisco.