Topaz Labs has just announced Topaz DeNoise 6, a powerful noise-reduction program that we feel is a must-have alongside a main photo editing application such as Photoshop or Lightroom.  DeNoise can help eliminate noise when it's just too stubborn to be easily removed by built-in tools in the aforementioned programs.  Proprietary algorithms allow DeNoise to reduce noise while leaving most file details intact.

For existing owners, DeNoise 6 is a free upgrade.  New users can download a free trial or take $30 off the regular price of $79.99 by applying the coupon code NOISEFREE at checkout.  This promotion runs from now through the end of February, 2016.

Download Topaz DeNoise 6 (free trial or $30 off this week)

The key new feature in DeNoise 6 is the ability to run the program as a standalone application, rather than as a plug-in for Photoshop, etc.  This enables batch image processing. New camera-specific noise reduction presets have also been added, though we aren't sure if the initial production release contains any Pentax profiles.  Finally, version 6 adds support for 4K monitors and allows working with larger file sizes. 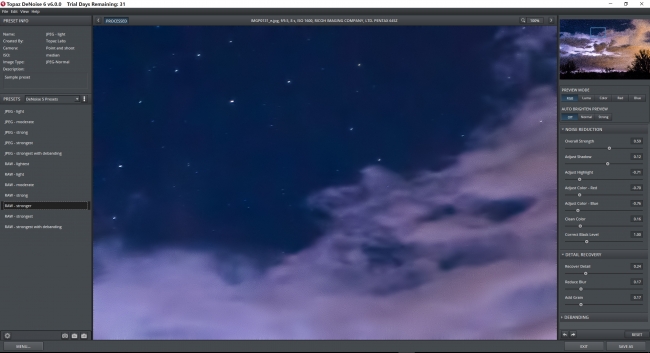 Topaz DeNoise 6 running on a 4K display on Windows 10

Here's an example of Topaz at close to its strongest noise reduction settings.  Notice how the bright stars aren't washed away, yet noise is virtually non-existent.  Below is a 100% crop of this photo from the 645Z (unprocessed version): 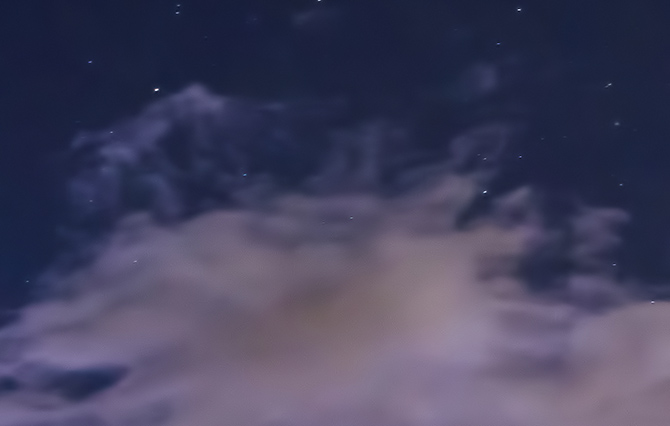 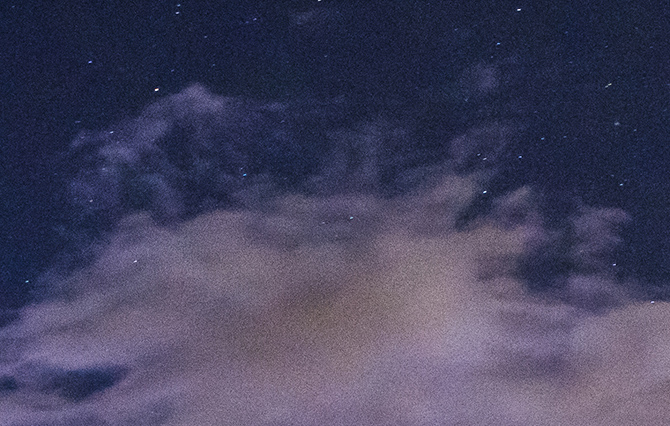 Looking at the full-size file gives us insight into how the software works.  While the strong noise reduction algorithm does break down in certain areas near the trees, it does a surprisingly good job of identifying and preserving parts of the image with fine details.  Tweaking the settings further would allow us to strike a perfect balance of noise reduction and detail preservation.  For very stubborn images, another possibility would be to layer multiple processed versions of the same file and selectively use different layers for different areas of the image.

• Standalone Application - DeNoise 6 now works as a standalone product and doesn't require a host editor to work. Although it can still be used as a plugin through Photoshop, Lightroom, and other supported host programs.
• Camera Specific Presets - DeNoise 6 introduces dozens of presets based on various camera profiles, with multiple ISO presets for each camera.
• Batch Processing (in standalone mode only) - DeNoise 6 introduces batch processing, allowing you to process a whole folder of images at once. That means no more need for Photoshop actions! Note that batch processing is only available in the standalone version, not the plugin version.
• Support for High DPI (4k) monitors in Windows 7/8/10

Learn more about DeNoise in our in-depth review of DeNoise 5.