9/19 Interview about the recent announcements, a full-frame, and more! 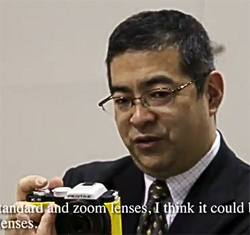 Now that Photokina has officially started, things at the event have changed quite a bit!  Today near the Pentax booth, we saw dozens of Pentax executives representing nearly all of the company's global divisions.  Among the people who we met was Mr. Jim Malcolm, the new Executive Vice President of Pentax in the US.  He seemed to be a very pleasant individual who was truly enthusiastic about the future of Pentax Ricoh, and we are therefore looking forward to seeing him in action and working with Pentax under his leadership!  After having talked to him, we now believe more than ever that Ricoh will get Pentax to make a very strong comeback in the photo industry, delivering exciting products to enthusiasts and newcomers alike.  Malcolm assured us that Ricoh would continue actively developing products for all three Pentax camera systems (the K, 645, and Q mounts) in the future, just as we had been told in the past.

We also had a chance to talk to Mr. Hiraku Kawauchi of Pentax in Japan, whom we interviewed at CP+ earlier this year. He will be joined by Mr. Andre Dierickx as well as other Pentax representatives in an exclusive PentaxForums.com interview to be conducted at Photokina tomorrow!  We will be asking the interview questions together with Mika Cruz, owner of the Spanish Pentax store "Pentaxeros," and co-author of the official letter to Pentax about making a full-frame camera.

The interview will consist of a total of twenty questions, some of which are very technical in nature, while others relate to more general concepts.  We will be posting the full interview transcript and video as soon as possible- likely tomorrow in the afternoon (US time).

When we interviewed Mr. Kawauchi earlier this year, we learned the following:

At the time of the interview, Pentax had not announced any new DSLRs for almost a year and a half, which was getting a lot of Pentaxians worried.  However, just a few months later, what our interviewee told us turned out to be true.  Kawauchi also told us that the prospect of a Pentax full-frame camera was not a mere myth, and we are sure that this will also prove to be true at some point in the very near future.  We'll be sure to ask for updates on the topic tomorrow!

Almost one whole year has passed since Ricoh formally acquired the Pentax imaging division from Hoya.  While it's obvious that even despite Ricoh's good intentions, it is impossible to develop a new camera from scratch, let alone a whole lens lineup, in this short amount of time, the merger with Ricoh has already stared showing some very positive signs.  The great Pentax brand visibility here in Cologne and the appeal of the Pentax booth at Photokina are but two of them!

If you have anything you would like us to convey to Pentax during the interview, please meet us at the Pentax booth at noon tomorrow.  We will do our best to speak to Pentax on your behalf!

Pentax Marketing Is On the Move