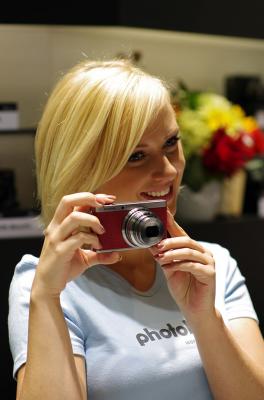 Photokina, the world's largest photo industry trade show, kicks off tomorrow!  Today we had a chance to preview the event by going on a press tour, during which we visited a variety of exhibitions and stands, including of course the Pentax booth.

Let's start with some pictures from the outside. As always, click on any photo to enlarge, and use your arrow keys to cycle back and forth:

Photokina has four entrances, with one located at each of the cardinal directions.  The facility itself is huge, with 11 large exhibition halls, 7 of which are in use for Photokina.  The press center is located near the north entrance, so that's where we started.  Upon entering the press center, we were pleasantly surprised that Pentax made their press kits readily available early on, while most other big companies did not, and simply left a note instructing those interested to head over to their stand. 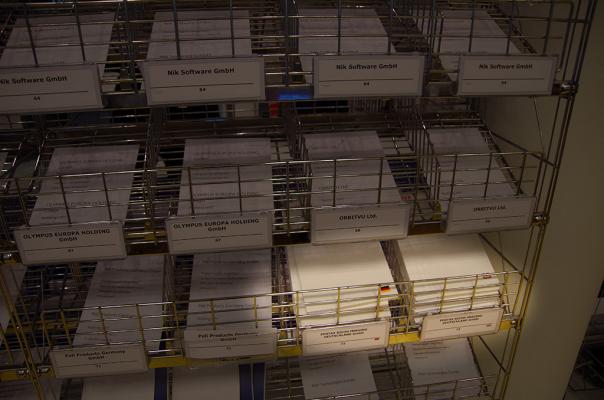 Within the press kit we found hardcopies of all of Pentax's recent press releases, updated roadmaps, and a CD with official images and specification sheets.  These materials contained nothing which we hadn't already seen, which means that no new product announcements will be made by Pentax at Photokina.  That's not to say that the event won't be worth our while, however, as there is still much to learn about these new products, and plenty of interview questions that to date gone unanswered.

At 10am, the press tour officially started, and we proceeded over to the main event space.  The first stop was Sony's "Jungle" booth, which included a large hands-on area with all current Alpha and NEX models, a stage, and plenty of palm trees!  A single RX-1 (full-frame point-and-shoot) was showcased near the entrance, and remained the center of attention for at least 10 minutes while photojournalists crowded around it to get a good view.

We had the opportunity to toy around with the a99 and NEX-6, and after doing so it was time to proceed to the Fuji exhibit, where a handful of models joined us to show off their cameras.

The Fuji cameras ended up being a real hit...

Next up was the Olympus booth followed by the Nikon booth, which we didn't spend too much time in, knowing the proximity of the Pentax stand.  That's where we headed next, together with a handful of other journalists, but unfortunately the models stayed behind with the main tour (which only officially covered a select few stands, not including that of Pentax, or Canon for that matter).

It is worth noting that the Nikon stand had all of the goods- including several D600's to test out, as well as dozens of other DSLRs from intro-level all the way up to the D4.  Anyway, let's move on to what really matters!  Here are some photos of the elegant Pentax stand:

As we mentioned earlier, the exhibition was mostly completed, though according to the event map, Pentax had reserved an additional space on the other side of this one.  Shortly after with first arrived, Wolfgang Baus gave an overview (in German) of what was new.  Unfortunately, the microphone he was talking into was not connected to an amplifier, but rather individual headsets which could not be plugged in to our K-30 (so next time we'll be filming with a Canon, sorry Pentax).

On a side note, the representatives at the Pentax stand seemed much more cheerful and enthusiastic than those at the other exhibitions that we had visited thus far.  They also knew what they were talking about, admitting to us that the mention of H.264 recording in the K-5 II's specsheet was a typo.

All of Pentax's new products, with the exception of the 560mm, which was only demonstrated upon request, were readily available for us to test and photograph.

Of particular interest to us, of course, was the K-5 II, which we will be blogging about separately.  Even more interesting, though (and perhaps surprisingly), was the Ricoh GXR, which we found to dominate the Pentax K-01 (and especially the new X-5) in terms of responsiveness and overall speed.  More on this later as well!

One thing we noticed about the K-5 II was that its LCD screen doesn't cause any reflections when photographed, which means that the new design will probably make it easier to see outdoors and in bright sunlight.  Considering that this is the second of the two improvements made to the camera, we weren't impressed overall, however.

Prior to leaving, this exhibit showing off Pentax's new HD coating caught our attention: 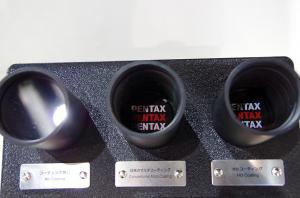 As can be seen in the photo above and the video below, the new HD coating further reduces flare and improves light transmission compared to the multi-coating.  We believe that type of coating is something that other companies (i.e. Nikon) have been using for a while.

On our way out, we took a snap of what the Pentax booth looks like from the main hall- it's just barely visible! 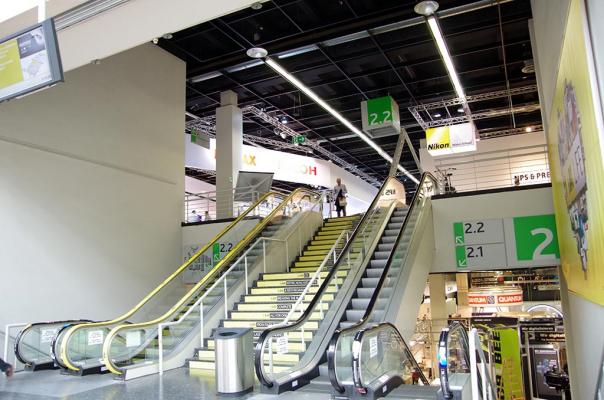 Other companies got a little bit more exposure...

That's it for the first day of Photokina, but we do want to add one thing.  Even though nothing else is going to be announced this time around, and even though nobody knows what Ricoh has in store for us, the Pentax representatives that we talked to couldn't refute that those who are patient will be rewarded with some great Pentax products in the future!  It may be tempting to switch to another brand now that both Canon and Nikon have affordable full-frame bodies, but there are certain things that even they cannot beat Pentax at, and that's why we're confident that Pentax will be making a big comeback under Ricoh's leadership.