Looking back at Photokina 2014

A great show and a promising future for Ricoh Imaging

This year's Photokina show was quite exciting for us, as the state of the camera market has changed considerably since 2012.  It was interesting to see what strategies different manufacturers are adapting to remain competitive in these difficult times, such as offering cutting-edge technology, strengthening existing product lines, or shifting to new market segments.  For consumers, this is great news, as a bigger variety of  imaging products is becoming available at the same time as prices drop across the board.

While some companies may be struggling in terms of sales, this was not easily discernible at Photokina.  In fact, in many ways the show was even better than last time, as we saw nicer booths (better marketing) and some impressive advances in technology.

Below are examples of attention-grabbing exhibits by Fuji, Nikon, and Ricoh Imaging: a BMW i8 that you could use for test photos, a ceiling-mounted video screen with scrolling photographs, and a digital waterfall splashing down Pentax and Ricoh product names.  All three enjoyed a nice crowd while the show was open.

We will only be focusing on Pentax in the remainder of this post. Other manufacturers had plenty of exciting things to showcase (don't overlook the Samsung NX1, Canon 7DII, or Nikon D750), so we hope you've had a chance to read about those products elsewhere.

Despite the seeming lack of announcements of new Pentax gear, the Ricoh booth kept us rather busy while we were at the show.  Part of the reason for this was that instead of launching many new products all at once at Photokina, Ricoh Imaging trickled their announcements from July through September.  Thus, there were actually quite a few "new" things on display for the first time.  Ricoh representatives made it clear that this was the company's intention, as they did not want to have their product announcements overlooked alongside all the other Photokina buzz.

Our conversation with Ricoh Imaging representatives this year was perhaps one of the most enthusiastic and insightful ones to date.  We met with Mr. Saiki (left) and Mr. Kawauchi (right) early on the first day of Photokina, which allowed us to publish the interview that same evening.

Don't miss the full interview view & transcript here.  Above all else, we learned that the company itself is doing well, so the future of Pentax and Ricoh cameras is looking bright. 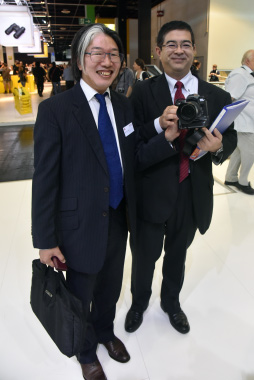 A Trio of New Pentax Lenses

An HD-coated 16-85mm premium kit lens will soon be joining the Pentax K-mount lineup; preliminary information suggests a December launch.  During the interview, we learned that this lens is aimed at for those dissatisfied with the performance and/or zoom range of the 18-55mm kit lens.  The lens offers a noticeably-wider field of view at 16mm, and since it's not a superzoom like the Pentax 18-135mm, we can expect even better image quality. 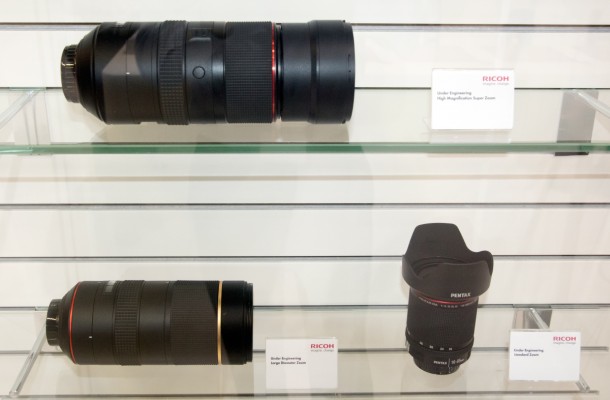 All we know about the other two lenses is that one will be an extreme telephoto zoom, and the other will be a fast telephoto zoom.  Some speculate that they are full-frame lenses, but this is not backed by any concrete evidence.  Regardless, they will each full an important gap in the K-mount lineup, so we're looking forward to their release (there is no ETA at this time).

The Pentax K-S1 and Q-S1 were announced in August. At Photokina, we learned that both these cameras are part of a new "innovation line" that will run parallel to the core Pentax K-mount and Q-mount lineup.  These cameras are being targeted at "modern" audiences that have grown in size as part of the recent changes in the digital camera market.

Specifically, the K-S1 is being marketed as a premium DSLR for users stepping up from a smartphone.  On top of its small size, it features a fresh design, above-average build quality, and advanced hardware with an emphasis on still image quality.  The K-S1 incorporates a new 20-megapixel CMOS sensor and it inherits other technologies from the Pentax K-3 flagship and the K-50.  It will be available in 12 different colors (3 standard colors, 4 special-order "night sky" colors, and 5 special-order "fabric" colors).

The Q-S1 is a more stylish version of the ultra-compact Pentax Q7 mirrorless camera that made its debut last summer.  It hasn't seen any significant functional changes apart from firmware tweaks.  This camera looks the part, however, and it is being offered in a host of new color combinations.  That alongside the fact that it's an ILC are its key selling points.  At Photokina, the Q-S1 attracted a sizable female crowd.

These cameras might not seem like anything special to enthusiast users, but it's clear that Ricoh is making a concentrated effort to cater to two very specific market segments.  We remain optimistic about both these bodies and are looking forward to seeing how they sell.

The Pentax/Ricoh compact camera lineup has recently been refreshed with the addition of three new bodies: the Ricoh WG-M1 (outdoor action camera), Ricoh G800 (tough industrial-grade camera), and Pentax XG-1 (superzoom bridge camera).  All three made an appearance at Photokina, though the G800 was unsurprisingly not part of the main display.  Ironically, the G800 was also the only original Ricoh Imaging design among the three, as the WG-M1 and the XG-1 are just face-lifted versions of generic cameras also branded as Kodaks.  The good news is that WG-M1 was launched alongside a host of mounting accessories, which do add greatly to its appeal alongside the solid WG-series branding.  The action camera market is clearly growing, and Ricoh wants to capitalize on this.

The Pentax 645Z has received a great deal of praise since in debut in July, and it attracted plenty of attention from the high-end crowd at Photokina.  There was one piece of news surrounding the camera: soon, the Pentax Image Transmitter 2 software will be released, allowing studio photographers to make use of its USB tethering capabilities.  A firmware update adding wired tethering support is now available.  The software is designed exclusively for the 645Z, and it will be available for purchase separately.  It will unfortunately not work with other cameras such as the K-3.

The 28-45mm F4.5 SR lens, or the newest addition to the Pentax 645 lens lineup, was also available for testing at the show.  The lens started shipping just a few weeks ago. 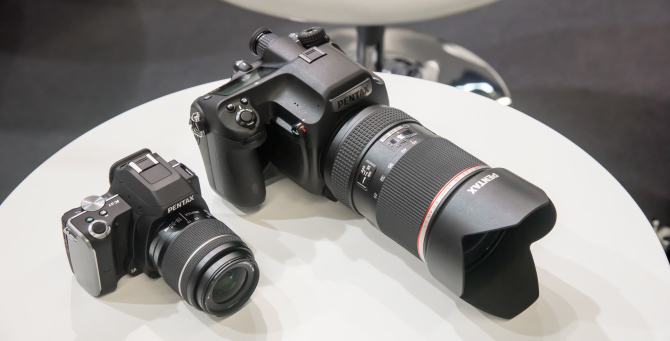 We had to see the lens in person before we were able to truly appreciate its size.  The 28-45mm is by far the largest sub-telephoto lens for the 645 system, and it makes the K-S1 look more like a Q in comparison!  It offers a field of view roughly equivalent to that of a 16-25mm lens on APS-C, or a 24-38mm lens on full frame.

If you were to pick a camera for hand-held photography, which would you go with?  Even with the 645Z's impressive 51-megapixel resolution and 3-stop noise advantage over modern APS-C (based on our preliminary tests), its advantages aren't plentiful for this purpose.  Put it on a tripod and it's a whole different story!

A Complete and Compelling Product Lineup

The Pentax/Ricoh camera system has grown tremendously since Photokina 2012, and this is not to be overlooked, especially since many of us take it for granted.  Ricoh Imaging now offers compelling product lineups for four different kinds of photographers: outdoorsmen (K-mount WR, WG series), studio/landscape professionals (645Z, 645D), consumers (Theta, K-500, K-S1, Q-S1), and enthusiasts (K-3, GR), and these product lines are more complete than ever.  Are all market segments covered?  Certainly not, but what's already there is impressive.

See our Pentax News and In-Depth Review sections to learn more about these products.

See some great Pentax marketing in action in our article about the Pentax & Ricoh camera brochure.

A Full-Frame is Just Around the Corner

At the very least, a full-frame camera is now more likely than ever, as Ricoh Imaging now has a solid footing and should be able to effectively market such a camera. See why we think that's the case.

This concludes our Photokina 2014 coverage, so we hope you enjoyed our news & commentary!  In case you weren't online last week, all of our Photokina posts will remain available for you to browse in one convenient place: the Photokina 2014 homepage category.

The next two major trade shows for Ricoh Imaging include CES (USA, Jan '15) and CP+ (Japan, Feb '15).  We'll be on site to bring you first-hand coverage as always.  Stay tuned!

Digital Waterfall at the Ricoh Booth