Pentax's latest DSLR represents the start of a new line

Pentax's latest DSLR— the K-S1— was on display here at the Photokina 2014 Ricoh Imaging booth.  This camera represents the start of a new lineup of DSLRs designed for modern audiences.  The camera sports a new user interface that's self-documenting and more user-friendly so that it is easy to get started with minimal overhead, and hard to get lost along the way.  The camera is thus meant for users who may have never used a DSLR before; however, it makes no compromises when it comes to build or image quality, and that's what makes it unique alongside competing entry-level cameras. 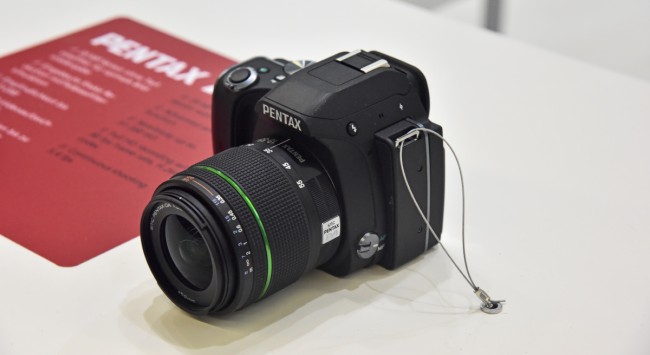 Before we continue talking about the camera, let's take a look at how it was presented at Photokina.  In addition to having its own display stand together with the K-3, the K-S1 was available for testing right in front of the attention-grabbing digital waterfall.  Click on either thumbnail below for a better view:

Now, for the tech specs: the K-S1 has been fitted with a new 20-megapixel sensor as well as several advanced technologies from the K-3 flagship, including a hardware anti-moire system ("AA Filter Simulator"), wireless tethering (via optional FLUCard), and fast live view autofocus.  A new PRIME M II processor allows it to effectively process files from its high-resolution sensor.  It also has an optical viewfinder with 100% frame coverage.  The remainder of the K-S1's specifications are derived from the K-50 entry-level body.  Read on for a hands-on look at the camera.

The defining feature of the K-S1's interface is the fact that the mode dial is now located on the back of the camera, surrounding the 4-way pad.  A green LED illuminates the current shooting mode, and the OK button has also gotten a fancy look with a blue backlight.  Movie mode has been removed from the dial and is instead accessible via the power switch.  The remainder of the interface is more of a facelift rather than something completely new.

When the camera isn't in live view, the rear LCD gives the user an overview of the current settings and button mappings. 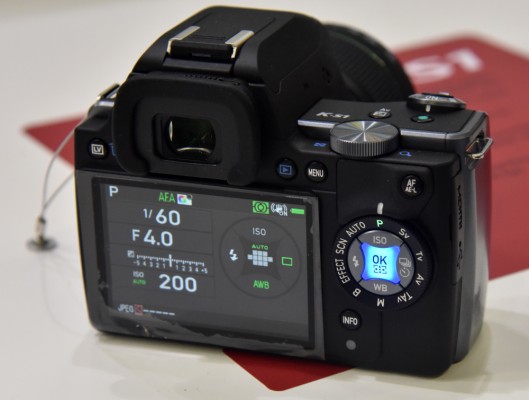 When switching modes, the K-S1 will tell the user more about the current mode in addition to indicating the function of the customizable buttons (AF/AE-L, green button, e-dial). Note the tooltip next to TAv: 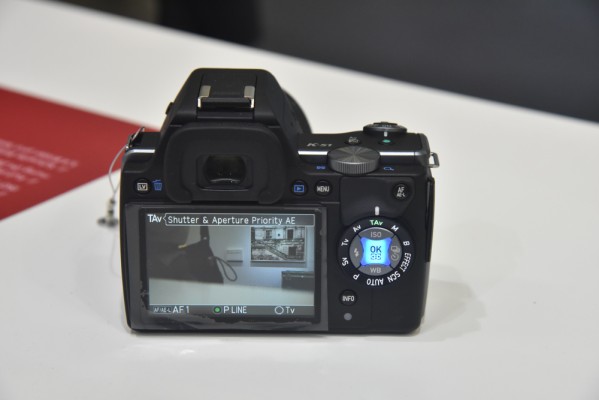 The main menu has gotten a visual facelift as well as new fonts. 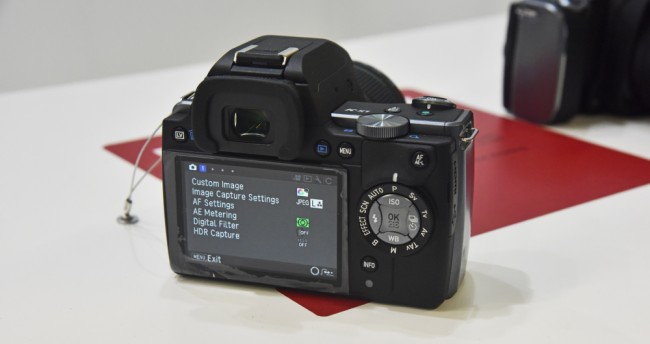 Finally, the K-S1 has the latest iteration of the info screen / control panel, which allows the user not only to quickly change key shooting settings (video settings in video mode), but also makes it easy for the user to see an overview of the current settings. 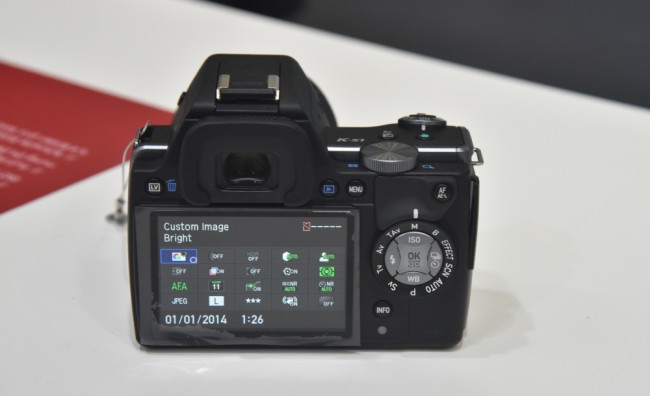 The K-S1 comes in 3 standard colors (black, white/grey, or blue/grey), and we find the latter two to look quite appealing.  If you're in love with the way the body looks, there are 9 other colors as part of a "Night Sky" or "Fabric" collection (details here). 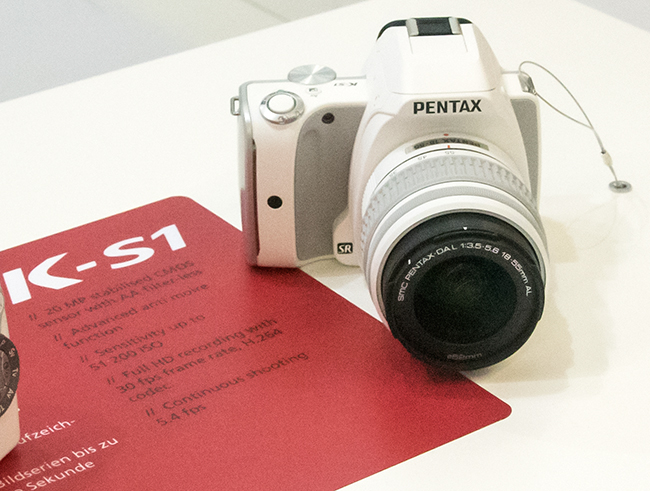 We have no doubt that the K-S1 will prove to be a very capable camera from an image quality standpoint.  After trying it out at Photokina, we can also say that the build quality is impressive; the camera has a premium feel to it, and its design and appearance goes against the stereotype that DSLRs have to be bulky.  Likewise, the live view autofocus is among the fastest currently available in a DSLR (for still shooting), so the camera has a "wow factor" beyond its appearance.

With that said, this camera is aimed at a unique audience: beginners who are willing to pay a premium for design.  Only time will tell whether or not the market is ready for a camera like this.  If it is, then the K-S1 will be a winner for Ricoh Imaging.  On the other hand, on paper, only a handful of specs push the K-S1 ahead of the K-50: its new sensor and the redesigned user interface.  The K-50, on the other hand, has a larger grip, a weather-sealed body, and a lower price (by about 30% in the US).  It's also much easier to hold and has better ergonomics.  Therefore, it will be interesting to see how the K-S1 fares.  We of course expect it to be accompanied by an appropriate amount of marketing and publicity.

What if you're a current Pentax user?  If you're still shooting with an older body, then the K-S1 may be a viable upgrade path.  However, in most cases we would say that either the K-3 (for advanced users) or the K-50 (for intermediate users) would be more appropriate, as both of these cameras are part of the traditional Pentax DSLR lineup meant for enthusiast photographers.

We'll end this report with a fun fact: the K-S1's on display at Photokina could go up all the way to ISO 102,400, or one stop above the maximum ISO of 51,200 indicated in the camera's specifications.  Pentax representatives have verified that production K-S1's will have the correct ISO range (100-51,200).  As you can see in the photos below, the cameras on display were running pre-production firmware.  Click on either thumbnail for a better view:

See below for a quick hands-on video with the K-S1:

The K-S1 will start shipping as early as next week, so stay tuned for our hands-on first impressions as well as an in-depth review.  To learn more about the K-S1, visit the official announcement.