A studio photographer from Romania 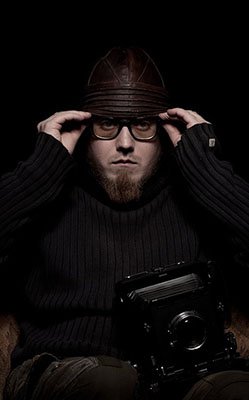 Today we present you with the story of another Pentaxian: Angelescu Stefan.

My father has played a big role in my life since I was a little boy. As a movie director and an adept of the Russian cinematography, he always dragged me to film festivals and photo exhibitions and that, I think, determined the way I see the world through the lens today. He also gave me my first camera, a Pentax MX which I still use today, and that was my first contact with Pentax.

My real love affair with photography started in high school, as those were the days when compacts were regarded as hi tech oddities and DSLRs looked like something out of a sci-fi novel. Back then, I was experimenting a lot, but shooting on film was very time and money consuming, so I decided to get my hands on a compact and from that point on it was a roller-coaster ride. I started winning a lot of local photo contests which allowed me to invest in various Pentax lenses and Pentax SLR bodies. I don’t know for sure, but some of my friends say that I might have a mild form of Gear Acquisition Syndrome :).

Towards the end of high school, I was contacted by a local professional photographer (Dragos Manea, now a dear friend). He wanted to tell me how much he appreciates my conceptual work and he was the one to introduce me to studio lighting techniques. Short after that, I found myself being commissioned to do model books and soon I was able to buy my first DSLR, the K10D, along with DA 21mm f/3.2 Limited and FA 50mm f/1.4.

Again, this was a turning point. In just a short time after conceptual photography and plain commercial modeling books, I saw myself employed by the biggest local media trust as a photojournalist, a field which I knew nothing about, except from albums, the works of Bresson, Capa, Adams and all the other great names.

It was weird in the beginning. The journalistic community here in Romania is a very small one, everybody knows everybody and I was the new, weird kid on the block, with a Pentax and odd looking lenses. It didn’t take long and we all became friends. That period was kind of cool. No matter how boring or dangerous the event was to be, you always knew there would be some familiar faces around and for sure after the event we would end up in a pub.

Unfortunately, all good things must come to an end... One year later, the financial crisis struck a blow to all printed press, many of the publications closed or moved online and many of us got laid off.

So, here I was with no job, a lot of free time and nothing to do. I started to do some volunteering work as a photographer for WWF but, unfortunately, that didn't turned out to be the extreme wildlife photo experience I was imagining...

Then, one day, I was reading an article about a new space telescope being built. Jumping from link to link, I ended up in the photo section of some amateur astronomy forum. Five months later, I was freezing on a field with a good friend of mine, also a photographer, behind two telescopes, tons of cables and some laptops, trying to catch photons of distant galaxies on my old K10D's sensor.

It's a very demanding activity but, in the same time, so rewarding. The moment you process tons of images, stack them and see the result, a fine detailed galaxy or nebula, it's beyond words... Also, the optical physics necessary to understand what you’re actually doing and how to improve your results or tune your gear is just priceless knowledge for the photographer inclined to hardcore experimentation.

Now, I have opened my own photo studio with a couple of friends and I’m working hard building a hybrid camera, a fusion of digital with the taste of camera obscura that produces interesting optical effects. Hopefully, an exhibition will soon follow.

That sums me up. I have no idea where my camera will lead me the day after tomorrow.