Medium format photography with the Pentax 67II and 645D 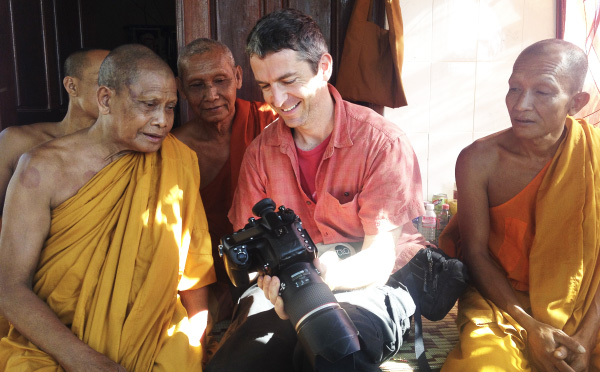 I'm a British ex-pat based in Okinawa. I specialize in shooting travel images of Japan for publication in magazines, newspapers and guidebooks.

In 2002, I started using the Pentax 67II. It’s a big, heavy, beast of a camera, but I was hooked by the beautiful transparencies it produced.  In Japan, the 67 is nicknamed Gulliver, and for nearly a decade it was my faithful travel companion. After escapades with ninja, yakuza and geisha I named my website TRAVEL67.com.

In 2010, the arrival of the 645D meant I could have the quality of medium format with the faster workflow of digital. Along with travel imagery, I started working in the studio, shooting model portfolios, products, headshots, and the occasional dog. My travel and studio photography converged with the Karate Masters Portrait Project in which I bring a studio flash to the dojos of Okinawa's martial arts icons.

For underwater work I use a K-5IIs in an Ikelite housing with a couple of external strobes.  I'd hoped the K3 would fit in the same housing but it's a tiny bit too big.

In September 2012, Pentax held an exhibition of my Japanese festival images at the Pentax Forum in Shinjuku, Tokyo. I was, to put it mildly, a happy bunny. Five pictures from the 645D were printed a whopping 39 x 56 inches.

My photos on exhibit at the Pentax Forum in Tokyo

I'm looking forward to the arrival of the 645D II. Tokyo 2020 is on the horizon, and there are many many images on my to do list. Check out my work on www.TRAVEL67.com and from there see the latest action on the blog.  See below for examples some of my work; click on any thumbnail to enlarge.