By EarlVonTapia in Pentaxian Profiles on Jul 7, 2014 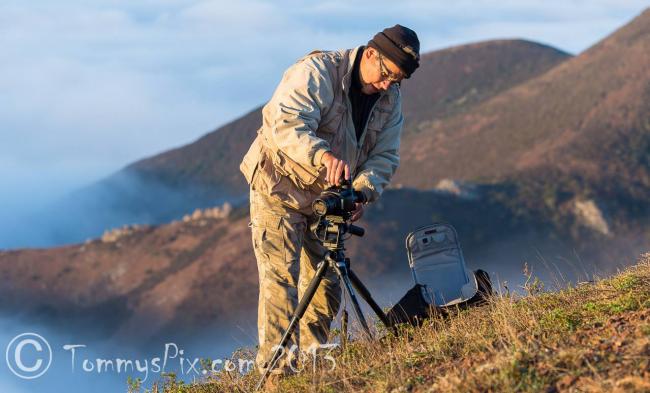 Mike Oria is a long-time member of PentaxForums (posting as mikeSF) based in the San Francisco bay area. During the day he works as a sales director for a medical lab. On weekends and his spare time, he is an avid photographer. His first digital SLR, a Pentax *ist DL, came from a garage sale. Now he shoots with a K5 and a 645D. Mike specializes in landscapes and seascapes.

In this interview we asked Mike about how he got into photography, what made him get into the Pentax 645 system, as well as some tips and tricks for how a budding photographer can take their skills to the next level.

How did you get started with Pentax?

I’ve only been doing photography, even as a hobby, for just 5 or 6 years. Before that I didn’t really have an interest in photography. I’m not one of those people that got the K1000 from grandpa. One day I wanted to take better pictures than what I was getting with my $40 Sony camera, and so I went on Craigslist and found someone selling a camera with a box of lenses. It happened to be a Pentax *ist DL. For about $150 I got the camera and a bunch of entry level lenses, in all different focal lengths. 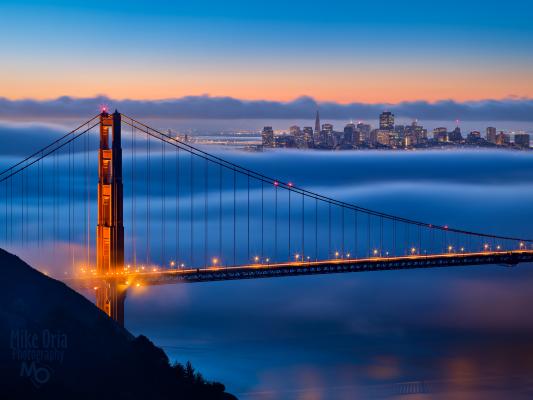 How did you get into landscape photography?

The San Francisco bay area is just rich in wonderful scenery. I’m out driving on the roads during the day for work. I’ll turn a corner or go over a hill or come out of a tunnel and I’ll suddenly see a vista that is just absolutely striking. It was easy to just head over to one of the bridges or to the city and take pictures. Certainly there’s a million pictures of the Golden Gate bridge on Google, and my one picture doesn’t add much more to that, but still it’s fun for me. And it’s a challenge because you can keep going back to the same locations to look for a different sky, different levels of fog, and different colors. Sometimes you’re dealing with 35 mile an hour winds and sometimes it’s perfectly still. It’s a different story every single time. 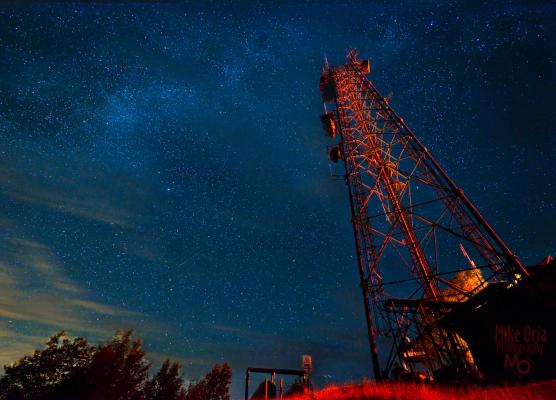 Back when I first joined the forums in 2012, I saw one of your posts where you shared a picture you took of a red tower against a blue star-lit sky. It’s one of my favorite pictures I’ve ever seen on the forums. Tell me about that shot.

That was when I got the O-GPS1. I was using my K5 and a Sigma 10-20mm f4-5.6 with it. It was two images. One image was for the sky, which would have been about 2-4 minutes. After that was done I immediately turned off the OGPS-1 off and then took one more picture of that same duration for the foreground and tower, and then combined them afterwards.

I met up with two other photographer friends and we had a tip to go out to this place in the foothills of the Sierras. We just drove until we found a really dark area without much light pollution, and found that tower which had a little blinking red light. When we arrived the skies were pretty clear and it looked like the Milky Way might be visible. But then suddenly a big bank of clouds rolled in, and I think in retrospect the clouds probably add a little bit to the picture, but at that moment it was awful. I just made the most of it and stood in my spot and waited. And waited. And waited.

Suddenly while I was standing there in the dark I heard a snorting and grunting and I could hear branches breaking and I heard an animal barreling over the hill toward me. I just got low and didn’t make noise. I thought I can always grab my tripod if I need to start swinging at it. I never saw it. It was so dark I couldn’t see my hand in front of my face, but I figured it had to be a bear. The good news is it went on its way, and later as we were driving back down the mountain we saw lots of bears crossing the road, so I guess that is confirmation of what it was.

I ended up selling that image many times. It was really popular. 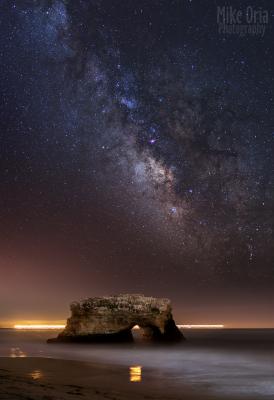 What were your reasons for making the leap from the K5 to the 645 system?

I was fascinated with the platform. I hadn’t done much research on it, but I had spoken with a few people that use medium format Pentax. But then I became more interested after speaking with Jim Malcolm (Executive VP of Ricoh Imaging Americas Corporation). I used my time to really talk to him about the 645 platform and the future of it. He was thrilled about it. He shoots with that himself. It just sounded like there was commitment to the format by the brand. I decided to start looking into it more. I found a 645D and a bunch of lenses at a pretty good price and so I went ahead and made that investment.  When I got the first prints back and started studying the detail, I was hooked. 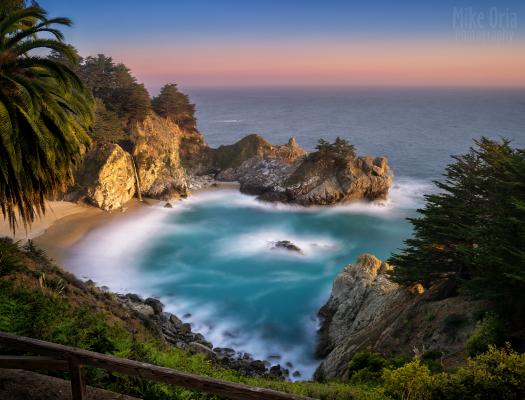 Why should someone make that leap from APS-C to the 645 format?

Pentax is already sitting on medium format technology that they’ve had since the 60s. They are an expert in the format. The price point might seem shocking at first, but in the grand scheme of professional  photography, and compared to people that are spending 30-50 thousand dollars for a medium format camera from other brands, the 645 system is a way to jump into a very pro level image for a moderate investment. 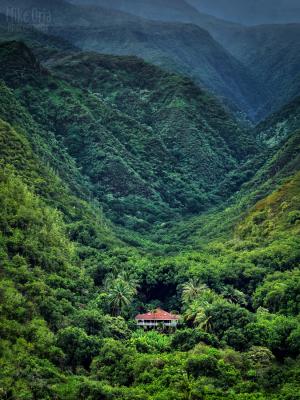 What are your 2 favorite lenses for each of the Pentax APS-C and 645 formats?

In APS-C I love the SMC Pentax-FA 77mm f1.8 AL. That is hands down my favorite lens. It’s designed as a portrait lens, but I found that it’s a landscape lens too. That may be blasphemy, because who wants to stop down this 1.8 lens? It looks beautiful wide open. But I’m usually using mine at f11-f13. It makes nice, sharp images, and it just renders beautifully for landscapes.

I have a lot of second place favorites, but one that gets used by me a lot for landscapes is the SMC Pentax-FA 31mm f1.8 AL. I do a lot of panos and I find that the FA 31 does them beautifully because it doesn’t have a lot of distortion around the edges, so you can stitch frames together without a lot of problems.

For the 645 system, there are two that stand out. The SMC Pentax-A 35mm f3.5 is one of them. It comes in an FA version too. It makes super sharp pictures and there’s minimal distortion. I take it everywhere I go.

My other favorite is the SMC Pentax-A 120mm f4 Macro. I’ll use it for panos and get a really sharp image.

Imagine a budding landscape photographer. They have a camera, tripod, software, and some basic know-how. They want to take their photography to the next level. What would be your advice to them?

There are two things that worked for me. Firstly, I’m a complete product of the forums here at PentaxForums. I didn't know anything about photography when I started, and I learned everything about photography on the forums, just asking questions, and reading other people’s threads and posts. It’s a great place. I’ve made friends on there that I’ve gone and photographed and traded gear with because I met them online.

I learned so much just from being on the forums that now I try and make myself available when people ask questions. I do get a lot of private messages and people asking “can you explain how you took that picture?” and I always try and respond to them and share what I can because that’s the same exact place where I got my information. I wouldn’t be sitting here enjoying the hobby or the craft nearly as much if it weren’t for others who gave me those answers.

The second thing is I would drop an email to a pro who had done a great job and ask “hey can I come out and join you on a shoot sometime and just shadow you a little bit?” and I found a few people who were willing to do that with me when I was just getting started. That was valuable as well. Most of them didn’t respond at all. But if you throw 30 darts, one of them will hit the target eventually. I don’t take offense if someone doesn’t want to do that with me, but it’s nice when somebody does reach out a hand to somebody who does want to learn.

Mike Oria's work can be found on his website. You can also message him on the forums where he posts as mikeSF.