It has been a while since we've featured a Pentaxian profile on our front page, but today, we're reviving the series with a story from Peter Charles!  Are you a professional Pentaxian?  Share your story as well!

Like a lot of kids my age, my first camera was a Kodak Brownie Starlet and I still have it though it’s long past its best days.  Film for it was a different matter so it probably only ever had a dozen or so rolls through it.  Still, it gave me a taste for what was to come next.  In 1969 I had a hankering for a real camera, but I couldn’t afford much.  Cruising London camera shops exposed me to wonderful gear that I couldn’t afford, but in one, tucked high up on a shelf of used gear, was an Agfa Isolette III. For the princely sum of £6 it was mine.  I soldiered on with that camera until ’81 when I finally joined the ranks of 35mm SLR users with a K1000.  I’d like to say that my choice of Pentax was inspired by performance and reputation, but alas it was simply a matter of getting the most camera for the least money.   Ironically I rarely blew an exposure with the Agfa despite not having a meter, but trusting the K1000 meter produced a pile of poorly exposed images. First lesson learned.  Once started, the gear collection snowballed, running to two MXs, a K2DMD and an LX, plus a Pentax lens collection numbering over 20, ranging from 15mm to 300mm. 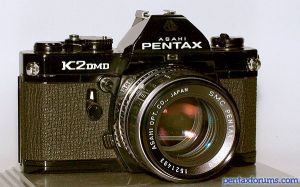 One day, while getting some prints made, I started chatting with the lab manager and found myself getting in at the ground floor with a new stock agency that was being formed by the lab.  That lead me to eight years of banging out transparencies for stock, shot mostly on Pentax gear.  The company I worked for needed a photographer so I volunteered to work my lunches, evenings and days off to produce images for their in-house and external publications.  This work introduced me to corporate photojournalism and environmental portraiture, using Pentax 35mm, medium and large format gear.  The photo journalism was a great experience. I was rubbing shoulders with some of the best newspaper and wire services photographers, jamming film into my camera bodies as fast as I could, all the while trying not to trip on cables and stumble in front of network TV cameras, yet still get the shot.  It was a great experience to mix with senior politicians, civil servants and the so-called ‘captains of industry’ as well as some great photographers who all very kind to this rookie.

The environmental portraiture first came about when we needed natural looking in-office portraits for publication.   Learned to become a real speed demon as none of these guys wanted me to take up too much of their time.  I’d set up my gear outside of their offices, wait for them to get off the phone, rush it all in, set up, balance the flash with window light, coach the unwilling subject, fire off a few shots, then get the hell out.  I turned that experience into doing private work as well as bolstering the stock portfolio. 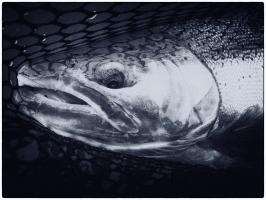 Unfortunately, the pro environment killed the passion for over a decade and in that time I returned to my other love; fly fishing.  These days I consider myself a fly fisherman who lugs around a camera.  My photography is now strictly a hobby and most of it  is related in some way to fishing.  So if you’re near a southern Ontario river and see a grey haired guy in waders carrying a Pentax DSLR, it’s probably me. Stop by and say hello.

Below are a few of Peter's photos: