Out of production and now limited availability 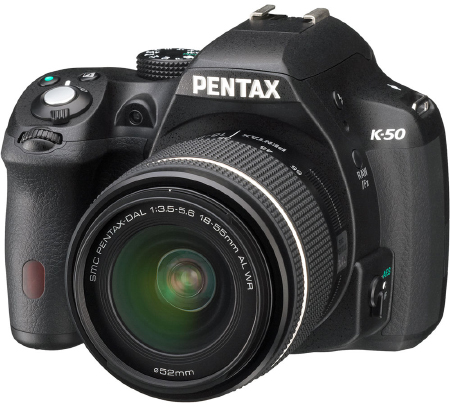 After seeing it on the market for nearly three years, it's time for us to say farewell to the versatile Pentax K-50.  The camera has been out of production for months but only now has supply started to dwindle at major retailers worldwide.  We also say goodbye to the 16-megapixel sensor that powered seven different K-mount models and gave Pentax class-leading APS-C image quality for three years.

The K-50 can be seen as a landmark DSLR for Pentax, as it was the first to bring weather-sealed lenses to the entry-level market segment: back in July, 2013, the affordable SMC Pentax-DA L 18-55mm WR and DA L 50-200mm WR kit lenses made their debut alongside the K-50.

You can learn more about the Pentax K-50 in our in-depth review.

In its final year, the K-50 body sold for as little as $299— an incredible value.  It is succeeded by the K-S2 (2015, $499) and K-70 (2016, $649), Pentax's current beginner-friendly weather sealed models.  Both boast significant enhancements over the K-50 in areas such as resolution, autofocus, and user-friendliness.  Like the K-50, the K-S2 is available in an affordable weather-sealed kit, this time with a new ultra-compact, silent-focusing 18-50mm lens.

The K-50 shares its internals with two siblings: the popular K-30 from 2012, which it replaced, and the K-500, a version without weather sealing or the electronic level.  The latter was discontinued just one year after launch.

While the K-50 will slowly disappear from store shelves over the course of the coming months, its legacy will live on and it will make a great second-hand body for years to come.  With the consumer DSLR market trending toward more features at lower price points, we are excited by the new K-70 and think that it and the K-S2 will do a sound job of filling the K-50's shoes while providing photographers with an enhanced shooting experience.

To celebrate the K-50, we will soon be launching a giveaway featuring it as the grand prize!